As HEXUS reported in June, flash NAND storage makers would like to move to popularize the likes of PLC (Penta-Level Cell, five bits per cell) flash but getting this denser tech up to the performance/reliability levels that would make it viable doesn't look to be on the roadmap of companies like WD until 2026 at the earliest. That hasn't stopped firms like Micron and Kioxia developing early test NAND chips using Hexa-Level Cell (HLC) or Octa-Level Cell (OLC) technology, though.

Now, a startup called Neo Semiconductor claims to have technology that could make denser NAND chips more viable. Neo broke cover last year, and won a Best of Show Award for Most Innovative Flash Memory Startup at Flash Memory Summit 2020 (Keynote recording on YouTube). Specifically, Neo says its tech can deliver the cost benefits of QLC NAND with bandwidth that rivals or exceeds conventional SLC NAND. Furthermore, the new X-NAND architecture doesn't require a disruption of cell and array design structures or fabrication processes, according to the company behind it. 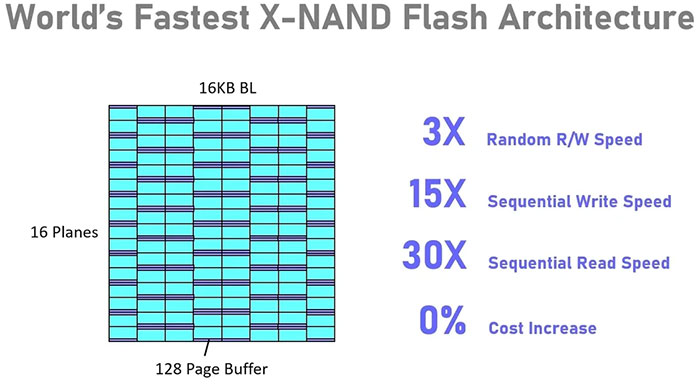 "Technological leaps have a history of driving innovation, so the expectations for NAND flash memory becoming faster by more than one order of magnitude are high," said Andy Hsu, founder and CEO at Neo Semiconductor Inc. "Imagine the possibilities when X-NAND QLC flash memory offers higher bandwidth than conventional SLC flash memory."

To find some background on how Neo's technology works, it is worth visiting the firm's website. There it explains that its X-NAND architecture divides 3D flash memory into 16-64 planes rather than the conventional 4 planes. "This provides ultra-high speed performance for 5G and AI applications with zero manufacturing cost increase," it claims. Some white papers are available for download, explaining the tech in more detail.

Currently, Neo is looking to license its X-NAND technology to key storage makers like WD, Samsung, Micron or Kioxia. It doesn't look like it has any of the big four on board, and we don't know if any of them are actively evaluating the technology.

Posted by philehidiot - Tue 10 Aug 2021 16:03
I think the kicker is going to be endurance. Higher transfer rates in environments which benefit from those speeds are possibly going to equal more wear, which may equal higher cost over time or worse reliability. I know if I was using them on an editing system, for example, I'd probably accept higher initial cost for NAND that would last longer as failure at the wrong time could cost significant cash.