We expect Intel to launch its Alder Lake-S processors and supporting 600 series motherboards towards the end of this year. One of the more significant advances the new systems will bring is the support for PCIe 5.0. This new interface will double the data transfer rate again from PCIe 4.0 (which Intel only just introduced on the desktop with RKL-S). As with the transition to PCIe 4.0 from 3.0, the biggest change we expect to notice is in cutting-edge storage performance and Marvell has announced that it has already lined up the "industry's first SSD controllers to support PCIe 5.0 and NVMe 1.4b". With this controller, capable flash NAND, and system support, we are going to be looking at transfers at up to 14GB/s of throughput and 2 million random read IOPS. The max theoretical transfers via PCIe 5.0 x4 are just under 16GB/s.

I've talked about consumer desktop support in the intro, but the first two members of the Bravera SC5 PCIe 5.0 SSD controller family are aimed at data centres, for now, with ecosystem support destined for AMD Epyc and Intel Xeon servers. The two new Marvell SC5 PCIe 5.0 SSD controllers are the 8-channel MV-SS1331 (8.7W) and 16-channel MV-SS1333 (9.8W) model. Both are capable of 14GB/s of sequential read, and 9GB/s of sequential write throughput, and random read / write performance of 2 million / 1 million IOPS. 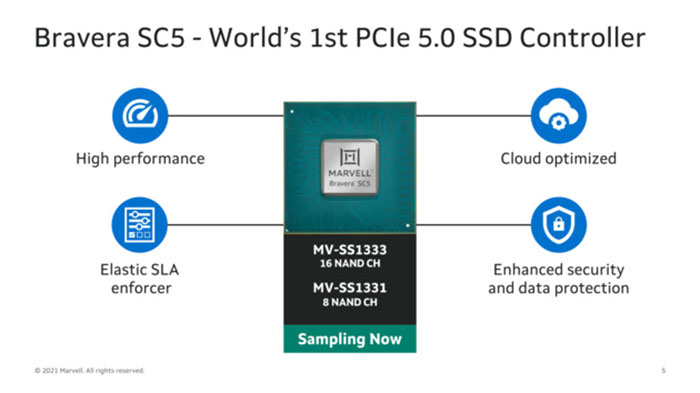 Understandably, Marvell's 20 x 20mm PCIe 5.0 controllers pack quite a lot of powerful tech inside. They feature a total of 10 Arm cores – a mix of Arm Cortex-R8, Arm Cortex-R7 cores - as well as a Cortex-M3 with integrated SRAM for data encryption duties. They support DRAM caches up to DDR4 3200 or LPDDR4 4266. The controller will work with a wide range of flash NAND chips; SLC, MLC, TLC and QLC - from all manufacturers. Marvell's new controllers from are sampling with select customers right now.

darcotech
So this is Intel's game now? Use PCIe Gen5 to tell how they are better (faster) than AMD?
What would be real world benefit except for maybe 5% of the cases?

I know right, next thing they'll be telling us 640KB isn't enough memory.
Posted by Tabbykatze - Fri 28 May 2021 15:32
These numbers look a lot better than the initial ones in the other thread with the ridiculously cooled SSD.

Patrick @ STH has an excellent breakdown of this controller.
Posted by 3dcandy - Sun 30 May 2021 09:38
In the enterprise game though it's things like this that DO make a difference