You are here:
Storage Industry News

Kioxia, previously known as Toshiba Memory, has announced a new type of flash memory which will help it move beyond QLC, without impacts upon important storage features such as reliability. In brief, Kioaxia's advancement is dubbed 'Twin BiCS Flash' and proposes the use of the world's first 3D semicircular split-gate flash memory cell structure. This structure facilitates "superior program slope and a larger program/erase window at a much smaller cell size compared to conventional circular Charge Trap (CT) cells," according to Kioxia in a recent press release. 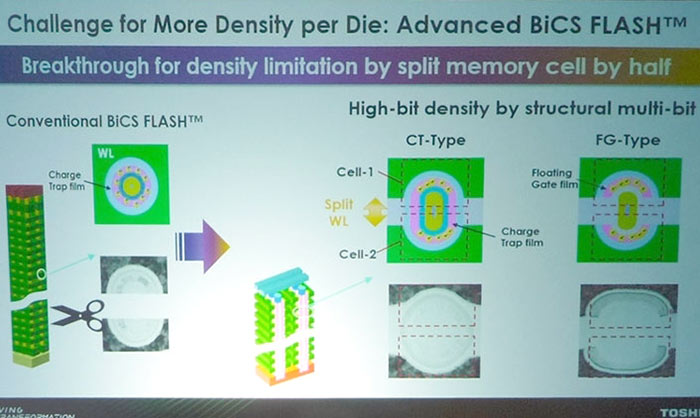 Compared with QLC Flash (four bits per cell) the new Twin BiCS Flash can achieve higher bit density and a lower cost per bit. Kioxia explains that the current way of increasing density is hitting the buffers with cell layers >100, plus problems controlling electron leakage, etch profiles and size uniformity. However, the new semicircular cell design splits the gate electrode in the conventional circular cell to reduce cell size - for higher density with fewer cells. 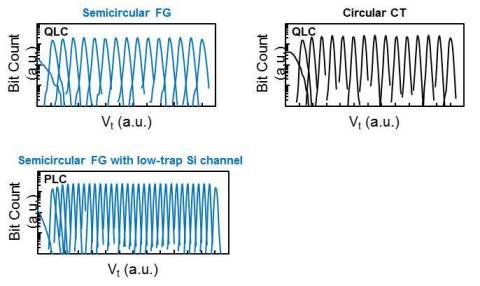 If you look at Fig3 from the press release, above, you can see that integration of low-trap Si channel into the semi-circular design makes possible Penta-Level Cell (PLC) flash memory. Kioxia reckons these test results "confirm that semicircular FG cells are a viable option to pursue higher bit density".

Korrorra
One of the dumbest names ever created by a company.

You could shorten it to TwiX :D