Toshiba has launched a new SSD product that it hopes addresses a sweet spot in consumer demand. The firm has designed a new M.2 NVMe SSD that it describes as “value optimised”, hoping that its efficient power sipping performance, sitting between SATA6 and enthusiast NVMe SSDs, appeals to thrifty consumers. Toshiba’s RC100 Series M.2 drives (22x42mm form factor) will be made available in 120GB, 240GB and 480GB capacities. 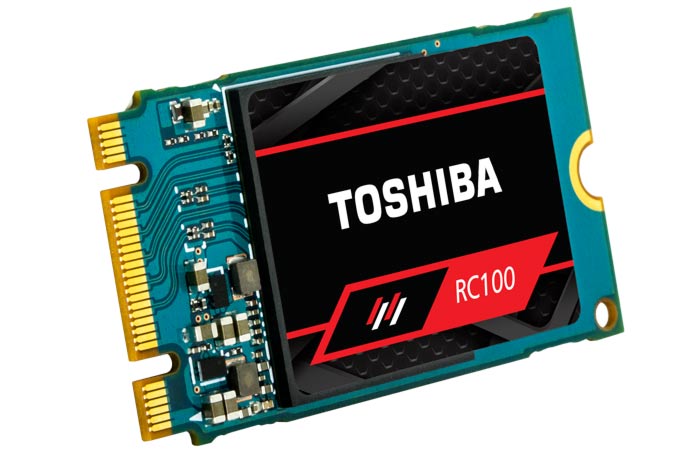 M.2 format storage devices are increasingly popular as more and more laptops and motherboards include this interface but until now most of the fast NVMe devices have been priced with enthusiast level premiums. According to Toshiba top brass, the new RC100 is the right product to make “NVMe to go mainstream”.

The new Toshiba RC100 M.2 NVMe SSDs use Toshiba’s own state-of-the-art 64-layer, 3-bit-per-cell TLC (triple-level cell) BiCS FLASH. Add to that an in-house developed SSD controller in a single package, and the elimination of the onboard DRAM buffer, factors which must help keep costs down, and you have the RC100 series. With its Host Memory Buffer (HMB) technology (using your system RAM - optional feature) the new RC100 can deliver; up to 1,620 MB/s and 1,130MB/s in sequential read/write transfer rates and up to 160,000 and 120,000 random read/write IOPS. Those figures are roughly two to three times faster than a SATA SSD drive. 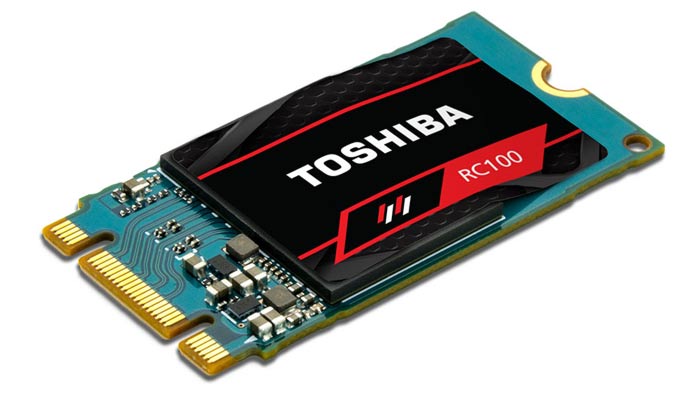 We don’t have precise pricing and availability dates for your today. However, we know that the RC100 series won’t become available until Q2 this year. The pricing of the top capacity (480GB) drive is hoped to be under US$200. Buyers receive a 3 year warranty.

Here's Toshiba's Alex Mei running through the feature-set when we visited the company's suite.

Posted by darcotech - Tue 09 Jan 2018 12:06
This is good.
For sometime now, the speed of SSD drives haven't been blocking part, especially NVMe ones.

The biggest flaw is the price and I would like companies work more aggressive on their prices.

1Tb of SSD (even SATA ones) is still expensive.
Posted by philehidiot - Tue 09 Jan 2018 13:29
My only issue would be if they've cut costs in random performance. I'm always wary of a repeat of the JMicron controller debacle where they sacrificed random performance for big sequential numbers for marketing and when OCZ produced some cheap but awful SSDs for the same reason. This resulted in an utterly crap SSD and is the reason we now test IOPS. The sequential numbers aren't really an issue anymore as you say but the random speeds can certainly bottleneck and I would be very cautious about investing in a “cheap” SSD until these have been fully tested, ideally by Anandtech as they go so in depth it's ludicrous. I don't think there's an issue with the underlying technology anymore - even the cheapest NAND is usually up to the job of a consumer SSD - but there are definitely potential issues surrounding optimisation of the controller, garbage collection and performance when the drive has been written on. Really, the money will be saved in the optimisation of the controller code and this means it's still possible to get a bad SSD.
Posted by kalniel - Tue 09 Jan 2018 13:30

hexus
With its Host Memory Buffer (HMB) technology (using your system RAM - optional feature) the new RC100 can deliver; up to 1,620 MB/s and 1,130MB/s in sequential read/write transfer rates and up to 160,000 and 120,000 random read/write IOPS. Those figures are roughly two to three times faster than a SATA SSD drive.

Sorry Hexus, but I think you're wrong there - even post meltdown fix my SATA 2 connected SSD with host buffer gets seq transfer rates in the 3000-4000MB/s range, and while my IOPS are lower, it's not by 2-3x as you claim for a SATA SSD.
Posted by watercooled - Wed 10 Jan 2018 22:16
That logo is stylised like an OCZ one - I wonder what that means for the OCZ brand as this appears to be a retail drive unlike previous Toshiba-branded ones?
Posted by persimmon - Fri 12 Jan 2018 00:08
KIANIEL you may be mistaken or just being fooled by the buffering on your ssd. Samsung rapid also does this and if your transfer *fits in* the buffer it will be reported as 1200mb or whatever.
These do sound a bit cheapo and the price is not marvelous, bettered by crucial mx300/mx500 (uk) but presumably it will fall to below 20p/Gb (25cents/Gb) . Certainly a step in the right direction, price-wise.