Benefits of Toshiba’s CMR/PMR drives are that they work with existing server and storage system architectures. Meanwhile, rival SMR (shingled magnetic recording) HDD products require adjustments to server and storage systems that will take some organisations “several years,” according to a quote from John Rydning, Research VP for hard disk drives at IDC.

The MG07ACA Series platters spin at up to 7,200 rpm and the Helium atmosphere enveloping the disks reduces aerodynamic drag to deliver a lower operational power profile. Toshiba has put in extra effort to make sure the Helium gas doesn’t escape the disk enclosure by utilising a precision laser welding technology at all joins.

Toshiba says it has already started shipping out samples of the MG07ACA HDD drives. We will have to wait a while longer before they reach further distribution channels. As they are aimed at cloud and business data centres I wouldn’t expect these SATA 6.0Gbit/s interface drives to appear at retailers like Amazon. 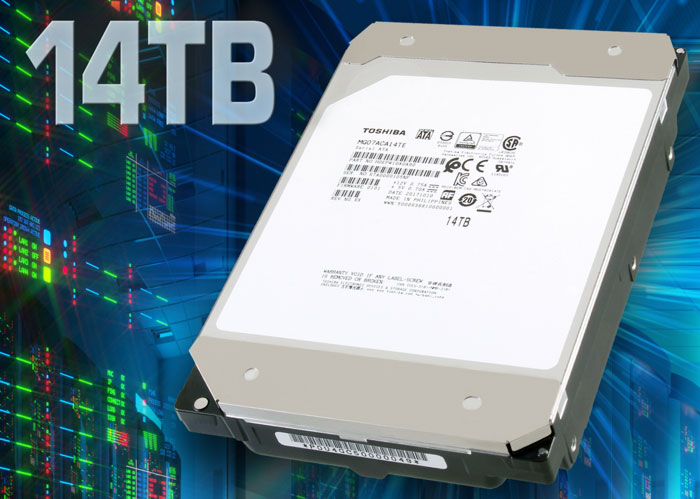 Unique
hopefully it won't be too long till these big drives come out at affordable prices, or at least push down the prices of 8tb drives under £100

azrael-
I had to re-read that a couple of times: Conventional Magnetic Recording.

Is that *really* what CMR stands for?

Unique
hopefully it won't be too long till these big drives come out at affordable prices, or at least push down the prices of 8tb drives under £100

It will, with one caveat, but the timescale is unclear.

The caveat is that while price/GB competitive pressure lowers prices furtyer down, there is a base price beyond which manufacture is not feasible, and is new technologies come with expensive new plant to install, then it may be a long time before that price pressure appears and if that base cost point rises too much, sub-£100 drives may never be feasible.

In other words …. who knows?