A new tech partnership aims to leverage resistive random access memory (ReRAM) in SSD storage devices. A company called Mobiveil is adapting its NVMe, PCIe and DDR3/4 controller technology to accommodate ReRAM technology from a company called Crossbar. The partners hope to address the "disappointment around 3D Xpoint," previously introduced by Intel and Micron in products such as Optane SSDs.

The above company CEOs joined EETimes reporter Gary Hilson in a joint telephone interview to spell out their plans. The headlining claim within the EETimes article is that combining Mobiveil's NVMe SSD IP with Crossbar's ReRAM IP blocks will enable "10 times more IOPs at one-tenth of the latencies of flash NVME SSDs". This will be of great asset to companies running large data centres, for example.

Mobiveil CEO Ravi Thummarukudy confirmed that it would be relatively easy to adapt his company's NVMe, PCIe and DDR3/4 controllers for the ReRAM architecture. Crossbar VP of strategic marketing and business development, Sylvain Dubois, said his company was working on the IP for ReRAM-based SSDs and is also working on integrating ReRAM into NV-DIMMS. The ReRAM architecture is capable of six-million 512B IOPS below 10us latency. 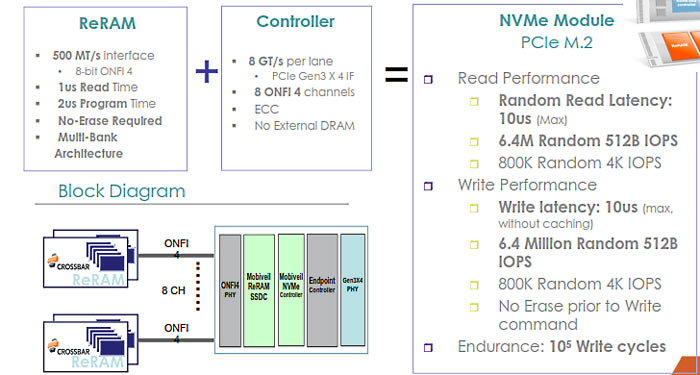 Like 3D Xpoint, ReRAM is persistent memory that offers close to DRAM speeds. The tech partners says that using ReRAM in SSDs removes large portions of the background memory accesses needed for garbage collection, which aids in its efficiency.

Analysts and enthusiasts were disappointed by the release of the first 3D Xpoint products as they were promoted as offering 1000x speeds compared to NAND flash but delivered about 7x or 8x speeds, an analyst told the EETimes. As it is still early days in the Mobiveil and Crossbar partnership it could well end up going the same way. Last but not least, it is expected that the products resulting from this new collaboration will be considerably more pricy than SSDs with 3D NAND but there will be a segment of the market willing to pay a premium for the performance on offer.

Where ‘soon’ means 'at some point before the death of the universe, assuming that we haven't miscalculated and that is indeed billions of years in the future'.
Posted by philehidiot - Wed 27 Sep 2017 13:32

Where ‘soon’ means 'at some point before the death of the universe, assuming that we haven't miscalculated and that is indeed billions of years in the future'.

5 billion years until the Andromeda galaxy smacks into us. Before that the sun dies. After that there's entropic heat death.

Somewhere between sun dying and Andromeda collision is the point at which a manufacturer's claim is finally found to be correct.