Microsoft has announced today that Windows 7 has reached a milestone of 600 million licenses sold. Just four months ago, in February, the figure stood at 525 million licenses. Windows 7 was released in October 2009 and is currently the operating system on nearly 40 per cent of internet connected devices according to Microsoft figures. Windows XP still accounts for approximately 45 per cent of global market share. 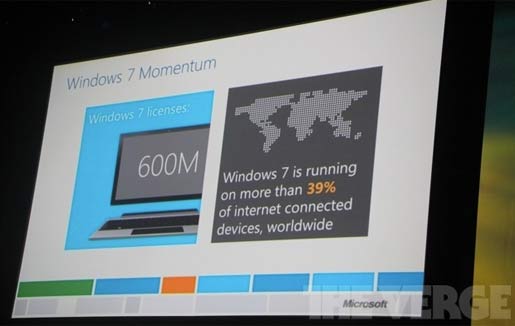 Speaking at the Computex ICT show in Taipei, Microsoft’s Steve Guggenheimer updated us on Windows 7 sales figures while showing some new Windows 7 based devices. Most of the new Computex hardware we have been reporting on at HEXUS seems to feature the new Windows 8 OS with its very touch friendly Metro interface. Indeed The Verge reports that Mr. Guggenheimer went on to talk about the “massive wave” of software coming from Microsoft soon that will “delight customers”. We suppose that includes Windows and Windows Server, Windows Azure, Skype, Bing, Office 15, Windows Phone 8 and Xbox software.

Often when a new updated piece of software is about to come out the previous versions sales can suffer, as users decide to simply wait for the latest and greatest. Microsoft has now started an update scheme to combat this tendency – the $15 upgrade offer. However Windows 7 demand has shown no sign of reaching a plateau, the latest figures showing 75 million license sales since February. The big changes in Windows 8 and its focus on the touch friendly Metro interface are not entirely welcome with many traditional Windows PC users which is probably another factor in the lack of slow-down in Windows 7 sales.

In a recent AMA session an exec said it is all about offering better security than ever before.

Jonj1611
And still Microsoft still hasn't got the message yet………….

Which message? Please don't be about to say “They should stick with Windows 7 and not release Windows 8 at least until it looks/works like Windows 7” because that would be stupid.

Jonj1611
And still Microsoft still hasn't got the message yet………….

It seems that Windows 7 is now being supported until 2020,even before its replacement has been released. It indicates important people in MS,do consider that Windows 7 will probably still be widely used in a number of commercial and consumer markets,especially with its record sales figures so late into its lifespan,despite its replacement being only a few months away.
Posted by Jonj1611 - Wed 06 Jun 2012 15:07

kingpotnoodle
Which message? Please don't be about to say “They should stick with Windows 7 and not release Windows 8 at least until it looks/works like Windows 7” because that would be stupid.

Nobody will ever need more than 640KB…

Well there were quite a few things I could say but won't bother now, already it seems its stupid to have an opinion.
Posted by aidanjt - Wed 06 Jun 2012 15:11

kingpotnoodle
Which message? Please don't be about to say “They should stick with Windows 7 and not release Windows 8 at least until it looks/works like Windows 7” because that would be stupid.

No, that would be sane. Only a complete moron would force a product on a market which clearly doesn't want it.

kingpotnoodle
Nobody will ever need more than 640KB…