Windows 11 is a cat that is almost fully out of Microsoft's bag, all bar the tip of its tail, perhaps. Initial impressions might have been a bit of a letdown for some, but one must remember that Microsoft will surely have some interesting background details to share about the OS, and some of that info might be about important changes under the hood / bonnet.

Over the weekend I saw some people had already started to run comparative benchmarks using the new leaked Windows 11 ISO, vs the latest version of Windows 10. In the tests I saw, Windows 11 was a smidgeon behind in many PC tasks - which is somewhat disappointing. However, there have been various hints that a major upgrade with Windows 11 will be the scheduler – which will bring big improvements to processors with mixed core types – hybrid 'big.LITTLE' processors like Alder Lake, and upcoming AMD architectures. 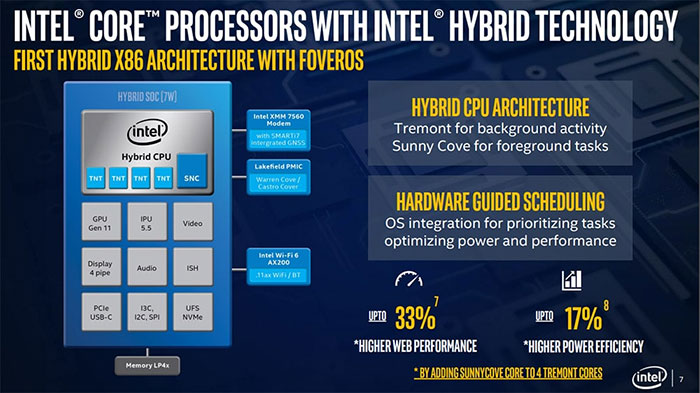 With the above in mind, Hot Hardware cannily decided to do some comparative tests with Windows 11 and Windows 10 running on the only x86 hybrid processor family that is actually available at this time – Intel Lakefield. On Friday it published a wide range of A/B test results based on the performance of a Samsung Galaxy Book S, powered by Intel's Lakefield-based Core i5-L16G7 processor, which failed to spark excitement when it debuted last September. 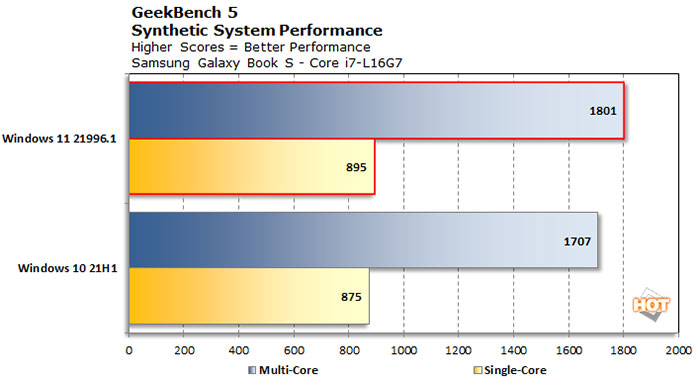 In its tests, Hot Hardware found that despite relying on Windows 10 drivers, the Windows 11 powered laptop offered a decent performance boost in many tasks. Positives included Geekbench 5 suite, Browserbench Speedometer, Cinebench, and the majority of the PCMark 10 modules. Windows 11 was up to 10 per cent faster, where it beat its elderly relative. Windows 10 only clawed back some slight benefit in PCMark 10 Digital Content Creation and 3DMark Night Raid. 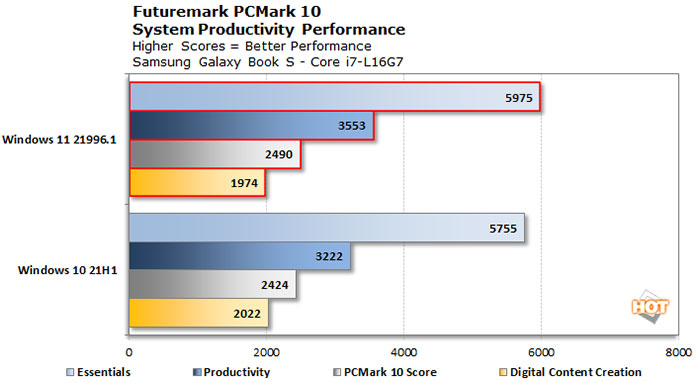 Overall, while it is interesting to see this comparison and there is a welcome glimmer here for current and future hybrid processor users, it is a bit too early for any solid judgement. If anything, the underlying scheduler improvements should get better with a final build of Windows 11, and the subsequent updates over coming months ahead of Alder Lake's arrival in desktops and laptops. Hopefully, the hybrid performance aspect of Windows 11 will get some stage-time at the impending 'What's next for Windows' event (Thursday).

PMMEASURES
taking with a pinch of salt given no comparison benchmarks with other CPU's could easily be within OS general performance improvements that maybe seen on all CPU's not just B-L procs. above does not hold any merit just yet IMV.

Yes - maybe - but the performance under Win 10 is awful and not at all nice. Win 11 *should* make it more acceptable. If people want low power ARM and hybrid cpu's on Windows then they'll need Win 11
Posted by excalibur1814 - Mon 21 Jun 2021 21:52
Performance with Windows 10 is perfectly acceptable. With an SSD, Word opens in… 1 second. That's just one example.

There's a limit of what to expect from performance when everything is already very, very fast.

Then again, all performance enhancements are welcome. Let's just be a bit realistic.
Posted by DanceswithUnix - Tue 22 Jun 2021 07:57

excalibur1814
Performance with Windows 10 is perfectly acceptable. With an SSD, Word opens in… 1 second. That's just one example.

But opening GIMP is a go put the kettle on job, whereas in Linux it opens on the same machine in a second or two.

Even so, there is no reason why the scheduler, filesystems etc can't be tweaked in Windows 10 iterations to bring in better performance or tweaks for new hardware. What they can't do is change how they make money from us. That requires a version number change.