Microsoft is finally implementing a "long-requested feature from many of Officer Insiders." It has decided make Dark Mode in Word more encompassing. Previously, the best its Dark Mode could do is enable a dark ribbon and toolbars but it wouldn't affect the colour of the page, the canvas where you type in Word… In a dark environment it is quite obvious working on a white page could be a source of considerable glare. 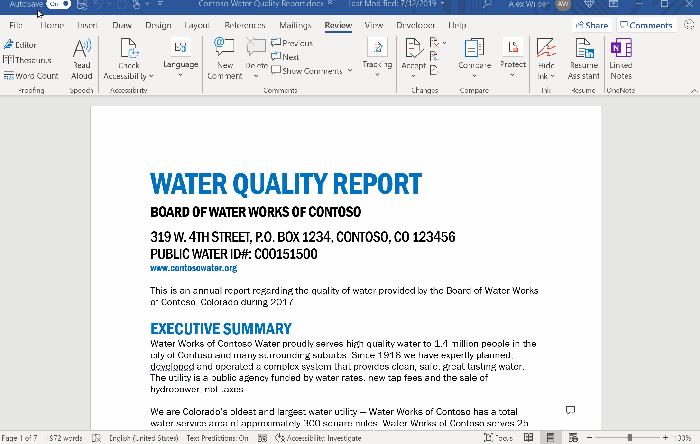 "As we log long hours with our screens, it has become increasingly important to reduce eye strain and accommodate light sensitivity," blogged Ali Forelli, a Program Manager on the Word team who works on accessibility. Going forward the Black Office theme will include your document canvas as well as the UI furniture.

Selecting and using the new mode is pretty simple. Just head on over to File > Account > Office Theme > Black. To subsequently toggle the canvas colour between black and white just click View > Switch Modes. When you switch to a dark canvas Microsoft Word will intelligently shifts colours of textual elements to show up better. Importantly the change won't affect how it will print or how document collaborators see the file. If the Dark Mode is of no appeal then you can even turn off the option of selecting it by personalising your Office options and disabling dark mode.

Office Insider Beta Channel users running Version 2012 (Build 13518.10000) are getting access to this more extensive dark mode first. It is available to test today if you are in that program. I'm not sure when the feature might become mainstream.

In other recent Microsoft / Windows news, yesterday was Patch Tuesday and Microsoft fixed 56 security vulnerabilities. One particular bug was being exploited in the wild already, CVE-2021-1732, an elevation of privilege bug in Win32k, a core component of the Windows operating system.

Elsewhere, there were fixes for six Microsoft product bugs that had their details posted online before the patches arrived. Also of note is that Microsoft has just fixed three vulnerabilities in the Windows TCP/IP stack.

ZDNet has further Patch Tuesday release notes and has collected together the latest security updates from other companies such as Adobe, Intel and Google.

Posted by philehidiot - Wed 10 Feb 2021 13:59
Something amusing about the most annoying word processor ever developed by Satan showing a “water quality report”. I have to wonder if they're hinting they were responsible for the recent water hack.

Or maybe using their software drove someone to try and murder the entire human race?
Posted by Wirko - Thu 11 Feb 2021 14:00
I'll make a Word virus that will search for letters “c”, “r”, “a” and “p”, in this order, at a close distance, and paint them red if the document is a financial report. The authors, working at night of course, will see it in white on black and suspect nothing. The CEOs and investors will read it during the day or from a printed copy. Mwahaha!
Posted by philehidiot - Thu 11 Feb 2021 15:28

Wirko
I'll make a Word virus that will search for letters “c”, “r”, “a” and “p”, in this order, at a close distance, and paint them red if the document is a financial report. The authors, working at night of course, will see it in white on black and suspect nothing. The CEOs and investors will read it during the day or from a printed copy. Mwahaha!

I'll be honest, if I ever found a zero-day for Word and could not get caught, I'd do something global and hilariously mischievous like that. Nothing wild, financially damaging or anything. Maybe change all electronic signatures on documents to “D. J. Trump” and a little turd emoji or something.