From time to time interesting new features being tested before coming to the mainstream release of Windows 10 can be found in the latest insider builds of the OS. On Wednesday, Self described 'Chief Nerd on the Windows Insider Program Team', Brandon Le Blanc, penned a blog post about Windows 10 Insider Preview Build 20226 which features, among other things, a new Storage Health Monitoring feature, visible in the control panel.

"Attempting to recover data after drive failure is both frustrating and expensive," points out Le Blanc. Thus the new feature "is designed to detect hardware abnormalities for NVMe SSDs and notify users with enough time to act." Even with this feature in place and working as it should regular backups are recommended and if the new Windows monitoring feature does flag something up, then "it is strongly recommended that users immediately back up their data."

To find the new feature, read more about your storage health, or follow up on any alert you might have received you can check your drive properties page at Storage Settings (Settings -> System -> Storage -> Manage disks and volumes -> Properties). If an alert like the one above is shown then you can simply click on it and be taken to this same settings page. It conveniently has a 'back up now' link within the settings dialogue. 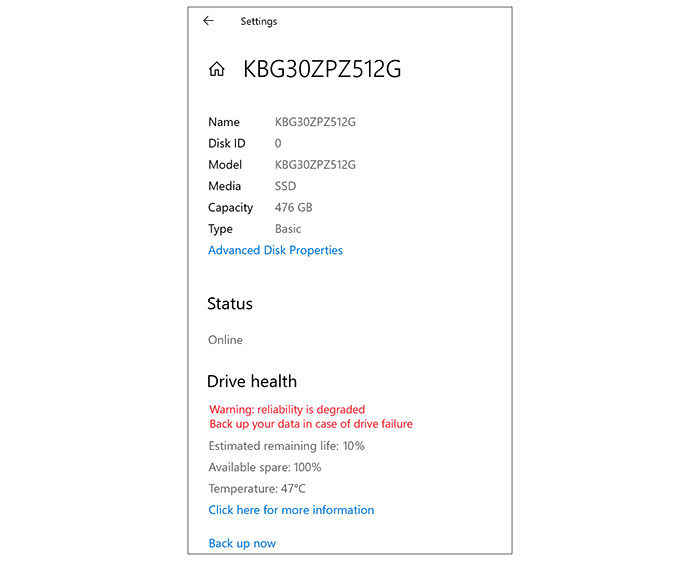 At this time the new Storage Health Monitoring feature seems like it only applies to NVMe SSDs. We don't know if the same feature will be extended to SATA SSDs or HDDs in the future.

Other tweaks and enhancements in Windows 10 Build 20226 include; a new Your Phone settings experience for managing linked devices, plus visual improvements to the device list which shows the personally synced device wallpaper for clarity. A host of bug fixes are listed as are a list of known issues. To read more about these head on over to Le Blanc's blog post linked above.

cheesemp
I was always surprised Windows never support basic smart data display, so this is a good idea but why not support SATA SSDs too?

Or HDDs. I was very glad years ago when a Linux box I was in charge of emailed me to say its hard drive was failing, before it just died and people started doing the headless chicken panic.
Posted by Gentle Viking - Thu 01 Oct 2020 14:24
Nice. finally something new windows i actually would want to use.
Posted by LSG501 - Thu 01 Oct 2020 14:49

cheesemp
I was always surprised Windows never support basic smart data display, so this is a good idea but why not support SATA SSDs too?

Honestly the amount of ‘basic’ things that windows should have but aren't there as standard is pretty bad.

Even to this day it doesn't come with out of the box thumbnail generation for things like pdf's, even though it has built in viewing via edge etc…

While this feature is nice to have, especially if it has a warning linked to it, most of likely have tools that do this already and are ‘better’ overall.
Posted by spacein_vader - Thu 01 Oct 2020 16:00

LSG501
While this feature is nice to have, especially if it has a warning linked to it, most of likely have tools that do this already and are ‘better’ overall.

Most of us probably do, most Windows users overall probably don't. In some ways it would be analogous to Notepad: Are there better text editors? Definitely. But the beauty of notepad is that you can guarantee its available on any Windows machine you use.