Microsoft let loose Windows 10 Insider Preview Build 20206 to Windows Insiders in the Dev Channel yesterday earlier this week. These releases are sometimes interesting to look more closely at as they often debut features that come to mainstream users of the OS in the subsequent months. Among the features added/improved in Build 20206 were the following highlights; the introduction of Voice Typing, and several improvements to the touch keyboard design.

Voice Typing is described as a "new and improved version of Windows dictation". Users will be able to invoke Voice Typing functionality any time there is an active text input field on the PC. The major changes in this voice input method are as follows:

That first point would be the most important to me as whenever I've tried dictation methods they aren't worth pursuing if they can't handle lots of non-dictionary words, abbreviations and phrases commonly used in technology. At the time of writing I don't have any PC in the Insider program so can't test it right now.

Microsoft says the Voice Typing function is simple of summon by using the Win + H key combo, or tapping the microphone on the on-screen keyboard. As well as being able to input the text you have spoken there are a number of hot-phrase commands that you can use for editing hands-free; for starting and stopping dictation, selecting, and deleting content.

Fourteen languages are supported in this initial release to Insiders but five of those are variations of English, plus there are two types of French and two of Spanish, as well as German, Italian, Chinese (Simplified) and Japanese.

As a feature in development, Microsoft warns that users may experience "random pauses while using the voice typing feature," in Office and other apps. 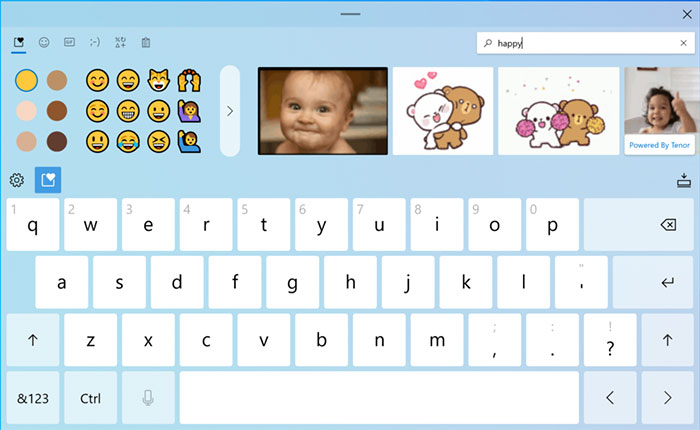 The other changes in Build 20206 mostly concern the touch keyboard, which will be used mostly by those who use Windows 10 in tablet mode. Design refinements include new key press animations and sounds, an easy way to undock the keyboard and drag it around your screen, fully labelled entries in the settings menu, an improved emjoi picker, emoji search, GIF search, and cursor movement using drag gestures on the on-screen space bar.

As usual, a number of fixes have been applied with this update but a similarly large number of issues are known to remain.

Posted by Euphonium - Fri 04 Sep 2020 22:30
More importantly, does this work offline or does it send everything back to a MS server somewhere for processing?
I'd love to have good on-device voice typing but I have no interest in sending everything to MS for them to datamine.
Posted by mtyson - Sat 05 Sep 2020 23:44

Euphonium
More importantly, does this work offline or does it send everything back to a MS server somewhere for processing?
I'd love to have good on-device voice typing but I have no interest in sending everything to MS for them to datamine.