Microsoft has pushed out another Windows 10 Insider Preview (build 19603) to its fast ring guinea pigs. There are a couple of significant additions in this release which might interest mainstream Windows 10 users; user cleanup recommendations in the Storage Settings control panel, and File Explorer Integration in the Windows Subsystem for Linux (WSL).

Storage is pretty cheap at the moment but if you have a device with limited pre-installed storage and it isn't expandable, for example, smart management options will always be welcome. Mobiles OSes, with their even more limited expansion options, have had storage management built in for quite some time. Android and iOS both let you sort through files and apps by how often they have been used, as well as size and so on. At the moment Windows isn't so smart but that is about to change. 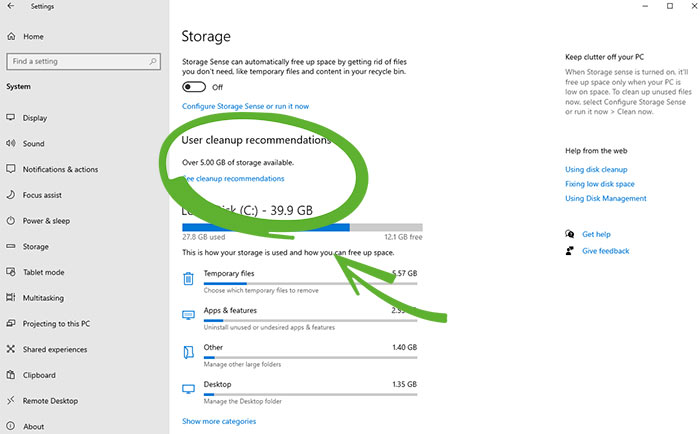 Microsoft warns on expecting too much from the new feature. It says that "Windows cannot predict whether you want to delete personal files, uninstall apps, or remove local copies of files synced to the cloud." Nevertheless more ways of analysing at your disk detritus are probably a worthwhile addition to the OS.

Another new feature highlighted by Microsoft is the File Explorer integration in the Windows Subsystem for Linux (WSL). This conveniently adds Linux file systems to the left-hand navigation pane in Windows File Explorer. "Selecting the Linux icon will show you a view of all your distros, and selecting those will place you in the Linux root file system for that distro," explains Microsoft's Brandon LeBlanc in his blog post.

Microsoft News Bar beta is also part of build 19603, so Microsoft can gather more feedback on this modern news ticker.

A couple of weeks ago Microsoft released a Windows 10 Insider Preview build 19592 with a selection of 2-in-1 refinements. At that time it gave notice that feature additions, as we see in these previews, would be shelved from May until further notice, concentrating instead on security patching only. So you won't be seeing any of these features in mainstream Windows 10 for some time.

Posted by rave_alan - Fri 10 Apr 2020 13:11
Windows could add some cleaning apps, like ashampoo has) Every version they add a lot of crap games and stuff but still no cleaning app:((
Posted by ik9000 - Fri 10 Apr 2020 13:41
my machine keeps trying to get me to activate the sweep up thing “to remove old files and clear up space” What it doesn't seem to appreciate is those old files are photographs, and being kept for a reason. FO MS and stop thinking you know how I want to use my machine better than I do. How about remove cortana and the telemetry bloatware and give me back some space that way?
Posted by Jonj1611 - Fri 10 Apr 2020 14:02
I use o&o shutup

It gives you a list of “recommended” settings but I needed some features it wanted to disable so I have chose custom options.