Intel continues to spruce up its Graphics Command Centre software ahead of the release of its Xe based graphics products going prime-time. The latest update to Command Centre delivers what has become a standard feature for AMD/Nvidia GPU users - game broadcasting functionality, and more.

The Graphics Command Centre is currently in beta and available on Microsoft's store for Windows 10 v1709 or newer users. Before I go on to describe the new features, it is worth mentioning you will need at least an 8th Gen Intel Core processor to use the new streaming functionality. Furthermore, this isn't a driver but an accessory app like the Nvidia GeForce Experience.

The official description of the Capture functionality is as follows: "this feature offers a simple and intuitive way for users to record and store videos of their primary displays. This can be used for a range of applications from recording footage of an intense gaming session to general desktop capture." 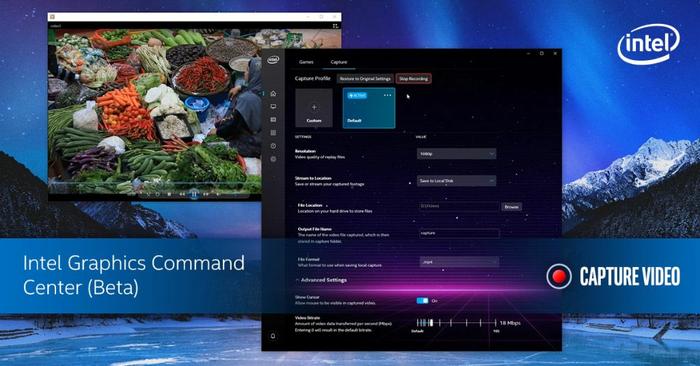 If you squint a bit at the official low-ish res screenshot you can see the Graphics Command Centre allows for adjustment of various parameters such as; capture resolution, saves file names and location, file format, file bit-rate, and cursor visibility while recording. It is possible to save and restore recording profiles too. Intel's announcement tweet mentioned 'broadcasting' so it must also be possible to stream this video capture.

The above isn't the only addition to the new Graphics Command Centre beta release. Intel has introduced 'Combined Desktop' in this new software version. Intel says that "this feature allows users to combine multiple displays to create a single unified desktop user interface, delivering a more expansive viewing space and enabling higher resolutions for a single image".

As well as introducing those two new features, the latest 100MB software update fixes a number of issues, though some remain. If you are using / testing this beta, Intel asks that you take some time to provide feedback. I'm not sure if there is an official portal for this purpose or if Intel will be picking through replies to its tweet.

Posted by Gentle Viking - Fri 28 Feb 2020 14:27
seem like everyone want you to stream something, without doing anything i have 3 options to do just that
1. Thru my AMD software for the GFX
2. Via one video editing suite
3. Via another video editing suite

And that's just the ones i know about, steam i would assume also offer this option.
Problem is,,,, i am not video or photo suicidal.
Posted by sinhaomar - Mon 02 Mar 2020 14:31
May be useful. Have a feeling it will be heavy for the system!