Watching the Windows Insider build releases, and associated blog posts, sometimes provides interesting insight about things to come. Recently Microsoft released Windows 10 Insider Preview Build 19551 with a few "general changes, improvements and fixes for PC," and that was more or less it - as described by the low key blog post. However, it has since been spotted that, in a move that will be welcomed by many, this update makes various staple Windows apps optional.

Notepad and Paint have been auto-installed by Windows since 1985 (Windows 1.0) and WordPad since 1995 (Windows 95). Windows didn't allow simple user uninstalls of these venerable programs until Windows 10 Insider Preview Build 19551. I remember having to jump through a few hoops, when I wished to replace Notepad with a more functional (but still light and compact) text editor, a few years ago.

Coming back to the present day Windows Insider build tinkerers over at Windows Latest and Bleeping Computer have noticed that you can now see the likes of Notepad, Paint and WordPad displayed within the 'Optional Features' control panel in Windows 10. Once banished (restarts may be required) the programs will be entirely removed from your PC and searching for them does not cause prompt you to reinstall these staple apps. 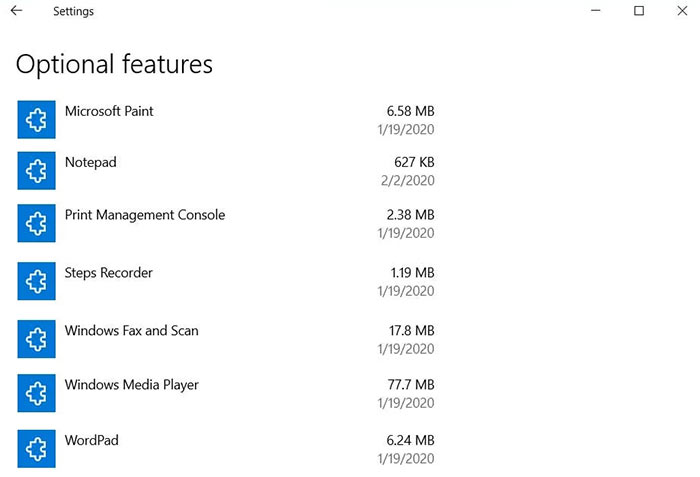 Removing Notepad (627KB), Paint (6.58MB) and WordPad (6.24MB) from your Windows PC won't be freeing up lots of space - especially if you have banished them to put an alternative in place. However, PC users generally welcome more configuration options and the potential removal of non-core apps / functions to streamline the OS. Hopefully this is a sign of things to come and many more apps bundled into the OS will become 'optional features' as Windows 10 development progresses.

Dashers
627KB notepad seems like an odd thing to target given the other crap in the bowels of Windows.

It is my remembering sheet - which starts up with Windows - always :-)
I update all my tasks several times a day.

It is snappy and it is simple.