An update to a staple Windows app introduced alongside Windows 95 is on the way but some may not like it. When was the last time cut-down word processor WordPad was updated and you noticed the change? If Microsoft's current tests are a sign of things to come then some users will be peeved with it being modified to be another advertising platform in Windows 10. 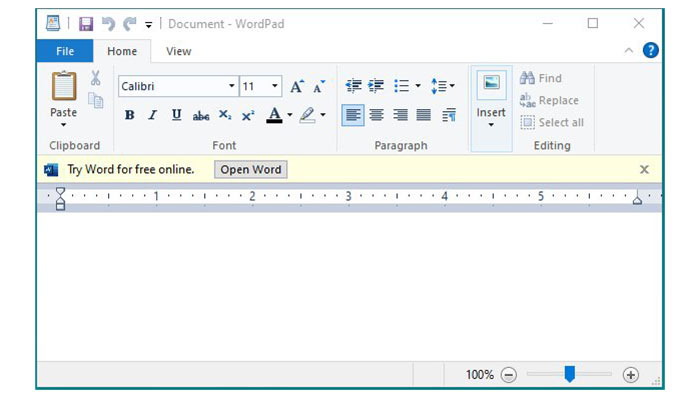 Over recent years Microsoft has been sneaking ads into various parts of Windows and supplied accessory programs. It has tested sponsored apps being installed in your Start Menu, or advertised apps in your Start Menu, on the app side of things Skype ads in banner and conversation forms have appeared, and more recently the Mail and Calendar apps have seen ads inserted.

The WordPad ads were spotted by Windows researcher Rafael Rivera who showed off six advert variants on his Twitter feed. New code in WordPad seems to inject a yellow highlighted text ad bar between the control ribbon and rulers above the page. You can see all six examples detected thus far in the image below - click to zoom. After the textual call to action you can see a button to press to visit the advertiser and at the far right of the light yellow ad strip there is a close box. I'm not sure if that action removes the ad section or changes the ad, or whether closing the ad strip is a permanent choice (probably not).

Some might not mind the WordPad 'ads'. On the plus side - they are small and text based ads, they appear to be limited to informing uesrs about free Microsoft services, and the online Office web apps are indeed more fully featured than a free offline app like WordPad. On the negative side - people hate intrusions within their core OS and apps, and it is the thin end of the wedge.

At this time it isn't known when/if this app update will bring these ads to the masses or how frequent the banners or the scope of the ads will be (third party product ads?) - if they are implemented.

Pretty sure I read somewhere that they were at the very least removing wordpad from the standard install and you'd need to get it from the microsoft store in future…
Posted by six_tymes - Wed 22 Jan 2020 22:39
cant have all the advertising money always going to google. share