Microsoft will kill off its Cortana app for Android and iOS early next year. A newly published support article from Microsoft notes that the software will be withdrawn from these major app stores on 31st January 2020 as part of an 'evolution' of its personal digital assistant service. Furthermore, the integration of Cortana in Microsoft's Android Launcher app is evolving in the same way as the dodo, in the same time scale.

Those who currently use the Cortana mobile app to configure settings and update firmware of the Surface Headphones, Harman Kardon Invoke, and other devices will have to use the dedicated Cortana Device Setup app for Windows instead. 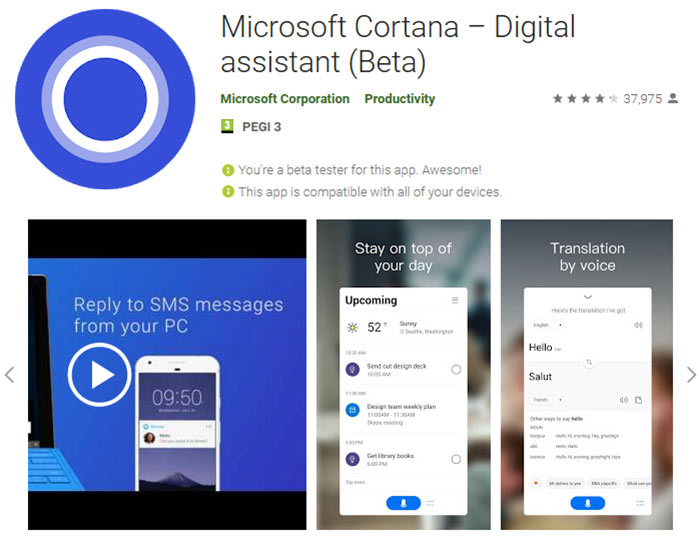 Tech site The Verge garnered a statement from Microsoft regarding its intentions, in the wake of the above Cortana news. "Cortana is an integral part of our broader vision to bring the power of conversational computing and productivity to all our platforms and devices," said the Microsoft spokesperson. "To make Cortana as helpful as possible, we're integrating Cortana deeper into your Microsoft 365 productivity apps, and part of this evolution involves ending support for the Cortana mobile app on Android and iOS," it was explained.

The above changes are evidence of Microsoft's intention to move Cortana solely into business focussed areas of Microsoft 365, and the fact that Microsoft CEO Satya Nadella no longer sees Cortana as a competitor to Alexa and Google Assistant.

Lastly, it isn't certain if the withdrawal of the Cortana app is global. Microsoft has issued a notice of change here in the UK, as linked to top, as well as for Australia, Germany, Mexico, China, Spain, Canada, and India. US customers might get extended support though, it isn't clear.

Zak33
Anyone here use Cortana?

Nope and to be honest i didn't even know this app existed.

I always feel Microsoft missed a trick with Cortana, one which Google & Amazon saw and now they are everywhere and poor Cortana just sits suspended in the background processes.
Posted by Gentle Viking - Mon 18 Nov 2019 15:55
I don't know anyone that talk to their devises, unless it is a phone and he / she are on a call.
If you have 2 functioning arms and hands it is downright stupid, if you don't it is pretty nice.

I am also willing to bet a whole lot of people think otherwise.

If i was able to use my own trigger word i might consider it, but i am not going OK google or cortana / siri / alexa / whatever.
But if i was able to make my phone listen to me by calling it bitch i might use it for fun now and then.
Posted by Saracen999 - Mon 18 Nov 2019 16:35
Personally, I'd be more impressed if they totally removed Cortana from Windows and left ut in the app store so that those, whoever they are, that want it can get it but for those that don't want it, nothing of Cortana was pre-loaded, suspended, hooked-in, etc.

I just don't trust MS to be not using it, regardless of how “suspened” it is supposed to be.

When it comes to the threat to privacy, for me, it comes to choice. My choice is no to Cortana, no to Siri (well, not a problem as my last Apple device was a Mac, in the days of B&W (okay, greyscale) screens), no to Google (in every form I can manage) and no to Alexa, the latter of which I simply will nof permit in this house.

Cortana, whether active or not, sneaks in the back door like a burglar in the night, and is waiting hidden in a wardrobe to steal stuff the instant I let my guard down.

So okay having it only in the app store might be a bit much. Make it an install option, either off by default or at an absolute minimum, deselectable in a custom install, quickly and easily.

I want nothing, and I mean nothing to do with any of these “features” that I can conceivably avoid.

I don'rt care a hoot if it's in the app store of not since the chance I will ever willingly install it is zero.

If it was possible to entirely avoid Cortana (or similar) it would be one of my major reasons for refusing W10 upgrades removed. Only 2 or 3 to go.
Posted by Stealthgyro - Mon 18 Nov 2019 18:22
I started using it since Google likes to kill desktop support for things like Google Now, and M$ is the way I can have everything synced. I'm on my desktop a lot more than my phone… I even tried using Edge and bing more trying to make it “smarter” for syncing everything. This is actually really disappointing.