Microsoft quietly introduced some changes in Windows 10 version 1903 to make VRR (variable refresh rate) more universally useful for gamers. The new global setting, toggled off by default, enables games to use VRR (e.g. Active Sync or G-Sync) even if they don't have any setting covering screen refresh rate.

As well as having Windows 10 version 1903, a user must of course be using an Active Sync or G-Sync monitor, be using a GPU that supports VRR and has WDDM 2.6 or above drivers, and be playing a full-screen DirectX 11 game - to be covered by the newly added functionality.

Daniel Schlegel, a program manager at Microsoft, wrote about the new OS-wide VRR feature on the official DirectX Developer Blog. He was quick to highlight that "this new OS support is only to augment these experiences and does not replace them". Thus is your game or app uses Active Sync or G-Sync normally, you should continue to go down that avenue. Furthermore, the toggle doesn't override any of the settings you've already configured in the respective Adaptive-Sync or G-Sync control panels. 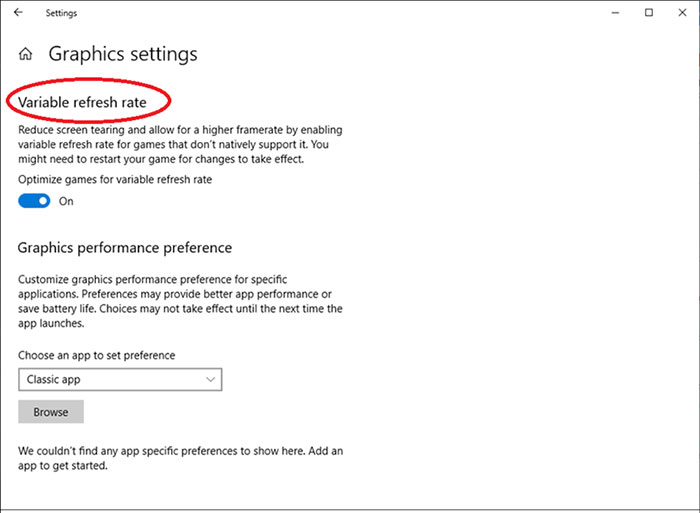 With all the conditions outlined satisfied, you will find the above illustrated graphics settings toggle is present in your Windows 10 settings.

From further reading around, the new OS-wide VRR setting may be especially welcome to those playing DX11 games bought via the Windows Store. Such games initially had issues with adaptive sync compatibility, and even with custom V-Sync settings added later.