Over recent months HEXUS and most other tech sites have been referring to the next major feature update to Windows 10, AKA Redstone 4, as the ‘Windows 10 Spring Creators Update’. Earlier this month we learned that its release had been delayed “a couple of weeks” due to a serious bug, testers were experiencing intermittent BSODs on their PCs.

Over the weekend a new report was published that seems to confirm that the upcoming feature update to Windows 10 will be called the ‘April Update’. NeoWin’s Steven Parker spotted the reference to the update, described exactly like that, via the official Edge browser landing page shown upon completion of the install of the Windows 10 build 17134, which was released to the Slow and Release Preview rings on Friday. 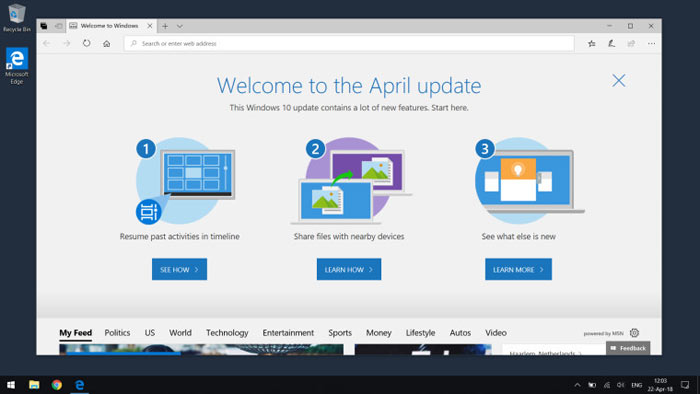 Less than a week ago well know Windows leaker Walking Cat shared a video of a Microsoft exect referring to the upcoming update as “Windows 10 April 2018 Update”. However, with the landing page ready (as reproduced above) this weekend, there is little reason Microsoft will change the name of this OS feature update again, unless it slips into May… So far Microsoft hasn’t officially named this upcoming update in any product pages, blog posts, or social media posts. NeoWin notes that the last time Microsoft used a month in the feature update name for Windows 10 was back with version 1511, the Windows 10 November Update from 2015.

Going beyond the impending update, to a feature that might not even make it into Redstone 5, this weekend Windows Central reported on a File Explorer dark mode under testing. References to this mode are seen in the latest Insider Preview build of the OS. 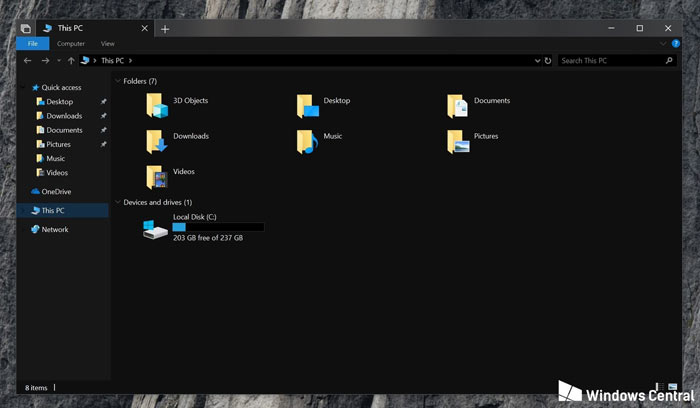 Once ready for roll out, dark mode will be easy to toggle within the Windows Settings app (I'd like to see it on a schedule like night mode). Other apps will adapt to the mode, says the source.

Posted by spacein_vader - Mon 23 Apr 2018 11:18
It seems someone in the marketing department used to work for Ronseal.

They could just use the same scheme Ubuntu use for releases without the alliterative part making this version 18.04.

Helpfully Winver reports this as version 1803, so it's the April update with a March version number that may yet end up being released in May. Good job MS.
Posted by LSG501 - Mon 23 Apr 2018 11:32
Yeah they could have just solved the update situation by going Windows 10 feature update # as it would just get 1 higher each time they have a major update.

The current ‘april’ name will have issues next year as there's no date mentioned.
Posted by Ozaron - Mon 23 Apr 2018 11:46
Dark mode all of the things! I don't know why I prefer it so much but at least there's something to look forward to. Usually Windows updates give me a grim expression and a sense of apprehension.
Posted by Ttaskmaster - Mon 23 Apr 2018 12:47
Can you not just create this yourself and save it as a Theme, or something?
Posted by lumireleon - Mon 23 Apr 2018 14:06
Microsoft is confusing customers with their update name schemes similar to how intel introduced Gold, Platinum etc schemes. Why not be simple?