With PC hardware and software companies still struggling to update systems before any Meltdown and Spectre exploits are found in the wild, wouldn't it be interesting to have a quick check to see how many of these background system updates had progressed so far? Now Steve Gibson, of SpinRite fame, has released a quick and easy tool to check your PC for Meltdown and Spectre vulnerability. It is called InSpectre.

On my desktop PC I was pretty sure that the Meltdown patches had arrived via Microsoft's automatic updates but I knew that Spectre was still going to be an issue due to my Gigabyte Haswell motherboard. Gigabyte isn't even thinking about such old platforms right now (but neither are Asus or MSI). Meanwhile, some Haswell and Broadwell systems that have been updated have demonstrated stability issues.

Firing up InSpectre, I received quick confirmation, as below: 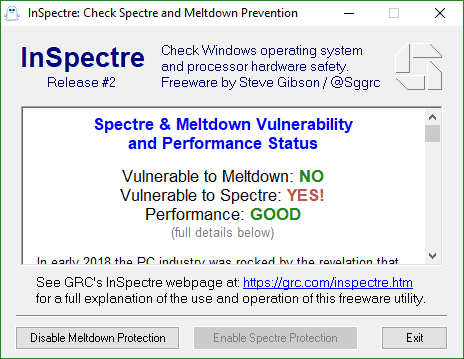 The above is much more straightforward than checking through update history to see which CVE XXXX-XXXX patches I have had applied and checking if they correspond to Meltdown, Spectre Variant 1, or Variant 2.

Under the headline info you can see within the app window above, you can scroll down to a more wordy description of your current system state. In my case it says that my 64-bit version of Windows has been updated for both Meltdown and Spectre but the hardware has not been updated (via BIOS) to close down any Spectre vulnerabilities. Further info suggests my Haswell / Win 10 system performance won't suffer significant slowdown, even with the BIOS update.

InSpectre has been carefully tested on many different systems and scenarios but is still quite new. Currently it is at release version 2 - an update was made so that it wouldn't trigger false-positive warnings from 3rd-party anti-virus scanners. 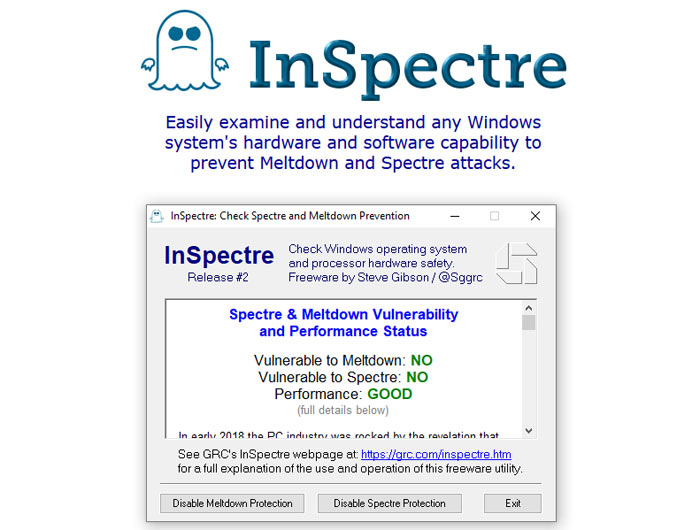 Patch toggles in the app

Interestingly InSpectre, when run with Administrator privileges can toggle the Meltdown and Spectre protections on and off. A system restart is required to apply the change(s). This feature could be good for those interested in comparative performance testing and so on.

You can read more about InSpectre on the official GRC site and direct download links to this 122k assembly language app are available there too. Please note that this is a news article, not any kind of recommendation that you should download and run the GRC InSpectre tool.

Posted by Firejack - Wed 17 Jan 2018 11:51
Handy little application. Will make it much easier checking the inevitable flood of friends/family PC's :mrgreen:
Posted by philehidiot - Wed 17 Jan 2018 12:34
Assembly? Wow, the authour should apply for a job with NASA. They're struggling to find people to send updated code / instructions in assembly to the Voyager probe as all the people who coded it are either dead or retired.
Posted by DDY - Wed 17 Jan 2018 12:48
RIP headphone users.
Posted by aniilv - Wed 17 Jan 2018 13:04
Vulnerable to spectre, no performance degradation - w10, 4790k
Can't imagine my super old but great b85 board will have any updates.

Vulnerable to spectre, with performance degradation - w7, i5 430m
Obviously since its a laptop, no bios updates.

aniilv
Vulnerable to spectre, no performance degradation - w10, 4790k
Can't imagine my super old but great b85 board will have any updates.

This is basically my situation although I'm using a z97 motherboard which hasn't had an update for over 2 years iirc and the cpu is ‘end of line’…. yet the cpu is far from ‘eol’ in terms of performance and usability so I'm now needing to wait to see if we get updates made available by the motherboard manufacturer (asrock in my case) after Intel vowed they'll ‘protect’ cpu's from the last 5 years…