Microsoft is preparing to debrand Cortana from Windows Search. Instead, the personal smart assistant will be moved instead to the Action Centre, reports Windows Central. In related news Microsoft is said to be building a new chat-based UI for Cortana in the Action Centre.

With Cortana already handling a multitude of Windows notifications the above does seem like a sensible move. People don't like speaking to their PCs, "and Microsoft knows this," asserts Windows Central - thus the need for the text-chat UI in Action Centre for Cortana interaction. However, people will still be able to voice interact with Cortana, features like 'Hey Cortana' will remain intact.

As Cortana moves along to the Action Centre, so other functions will be moving out. Likely to make way for more text interactivity and notification cards, the array of quick action settings (icons for network, location, night light, and so on) will be moved to a new tray settings icon (see below). 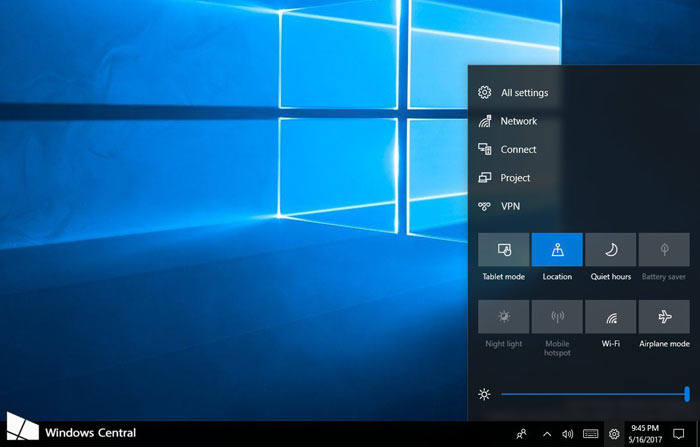 With Cortana out of the way Windows Search will be more nimble, removing any unnecessary Cortana interactions from your tasks. In another way Cortana will be more visible with a dedicated icon in the task bar that isn't associated / obscured with the search functionality.

It is thought that the above mentioned changes to Windows 10 should make it to the Redstone 5 release in autumn.

It has its uses.
But it should have been both opt-in only, and far more transparent as to what it can collect and use.
Which is also applicable to much larger portions of Windows 10.
Posted by Wolfclaw - Tue 16 Jan 2018 15:24
Whatever you think of W10, at least Microsoft are trying to streamline and clean things up, which in my book can only help.
Posted by lumireleon - Tue 16 Jan 2018 15:30
Microsoft should be pushing Cortana to a stand alone device like Google Home Mini than irritating us with it on PC which is doing other processing intensive important stuff
Posted by Friesiansam - Tue 16 Jan 2018 16:09
The best thing Microsoft can do with Cortana is get rid of it from Windows 10 altogether, failing that, at least make it possible to completely stop it.