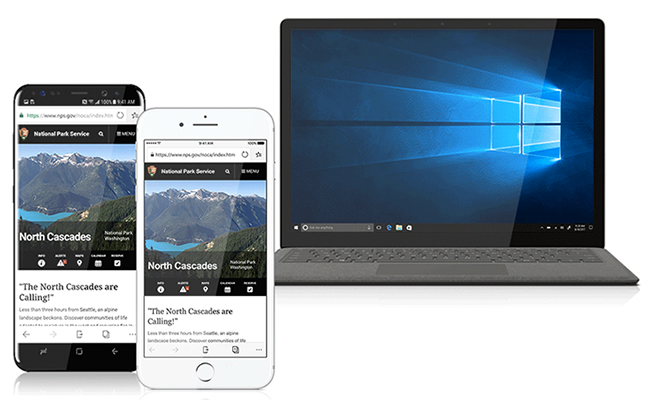 Microsoft has revealed that it will be bringing its Edge browser to both iOS and Android.

Announced by Joe Belfiore, Corporate VP for Windows and Devices at Microsoft, in a blog post, the new mobile-friendly versions of Edge are designed to help you synchronise your browser activity between your smartphone and PC.

'One of the most common requests we hear from people who use Microsoft Edge on Windows 10 PCs is “we want our browser experience to move to our phones”. You spoke, we listened,' wrote Belfiore in the blog. 'Microsoft Edge for iOS and Android brings familiar features like your Favourites, Reading List, New Tab Page and Reading View across your PC and phone, so, no matter the device, your browsing goes with you. But what makes Microsoft Edge really stand out is the ability to continue on your PC, which enables you to immediately open the page you’re looking at right on your PC—or save it to work on later.'

The launch is currently best described as limited, however. Edge for iOS is available today, but only as a preview via Apple TestFlight, while the Android version is simply said to be 'coming soon'. It's also currently in US-English only, but Microsoft says language support will expand as the preview continues.

Larger devices (iPads and Android tablets) are also not supported at launch. Finally, the Continue on PC function will only be enabled in the Windows 10 Fall Creators Update, so only those on Microsoft's Windows Insiders programme can take advantage for now. Regardless, if you're still interested in having a play, you can sign up to preview both version at this link.

In the same post, Microsoft also unveiled that its 'Arrow Launcher' project for Android is being updated and renamed to Microsoft Launcher.

'Today, we are also launching a preview release of our new Microsoft Launcher for Android. We think it’s the most beautiful (based on Fluent design), customizable, powerful launcher available. With Microsoft Launcher, your recent photos, documents and more can all Continue on PC as well,' continued Belfiore. 'And – just like on Windows 10 – with Microsoft Launcher you can put icons of your favorite people right on the home screen so they’re quickly and easily available.'

Posted by ik9000 - Fri 06 Oct 2017 14:05
They can just French Connection UK out of here if they think I'm putting it anywhere near my android phone.
Posted by bridges009 - Fri 06 Oct 2017 14:26
I think they should at least make Edge the best browser on their own OS before they start on others.
Posted by cheesemp - Fri 06 Oct 2017 14:37
Don't Apple ban anyone from using a HTML/Javascript engine other than safari on iOS? I'm 99% sure firefox on iOS is just a wrapper around Safari due to this restriction. If so I'm guessing this is the case here? In which case its really just a bookmark sharing service…
Posted by peterb - Fri 06 Oct 2017 15:25

The last thing I want is the ‘Edge browser experience’ - anywhere - and least of all, my phone
Posted by iworrall - Fri 06 Oct 2017 15:47
I read elsewhere that what MS are calling Edge is just a frontend for each OS's standard browser backend.

Webkit on iOS, and Blink on Android