Asus has updated its ROG Claymore modular keyboard design (launched in 2016) with the Claymore II. The revised model pulls ahead by offering both wired and fast wireless connectivity (necessitating a built-in battery for 43 hours use with lighting on), as well as moving from Cherry MX to Asus ROG optical mechanical keyswitches.

In essence the ROG Claymore II is a tenkeyless 9TKL) keyboard with a detachable numpad which can be locked onto either side – appealing to the right handed and the sinistral equally. The TKL layout is described as 80 per cent and clipping in the numpad gives a 100 per cent gaming keyboard. There is also a detachable wrist rest provided.

Asus has updated the Claymore II to use its ROG optical mechanical keyswitches. Rather than the four choices with Cherry MX, you will now get two; RD Red – linear and swift, and RX Blue – clicky and speedy. Asus has a product page dedicated to these switches if you want to know more about them and the tech specs. In summary, the optical mechanism is said to be good for greater durability – up to 100 million actuations, have great stability, central lighting design, and offer "near-zero debounce delay," in use – an attractive quality to gamers and eSports pros. These switches have previously been available in the ROG Strix Scope RX keyboard. 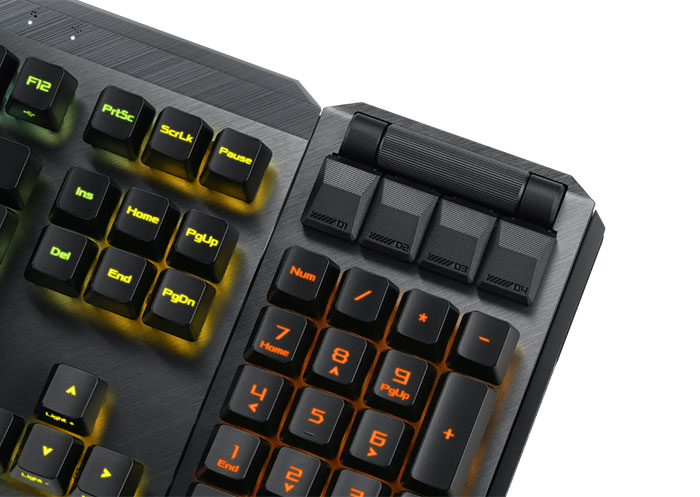 With the updated version, Asus has decided to offer both wired and wireless connectivity. It asserts that whichever mode you choose you will benefit from the same appealing "ultrafast 1 ms response". If you do go wireless you have a pretty lengthy 43 hours of use with num pad attached and RGB illumination on (up to 144hrs lighting off). The USB connector allows for wired use and fast charging of the built-in 4,000mAh battery (30 minutes charging for 18 hours use lighting off). There is Type-A USB pass-through too.

Other qualities of this mechanical keyboard include its intuitive media controls, wireless Aura Sync, full length leatherette wrist rest, onboard memory, and battery level LED indicator, on the fly macro recording, plus 100 per cent anti-ghosting and N-key rollover. 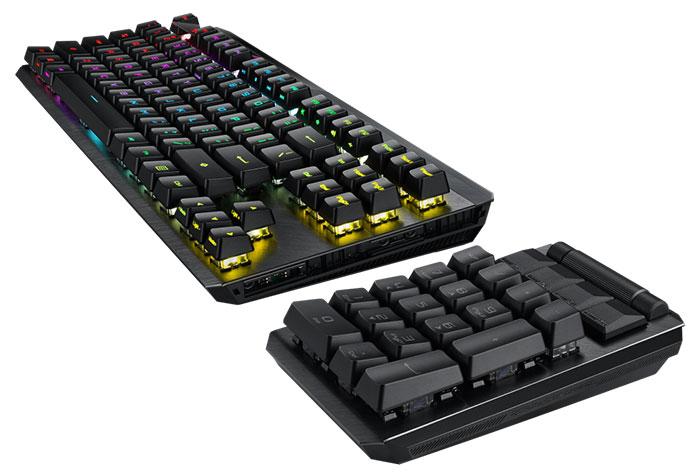 The Asus ROG Claymore II modular keyboard is available now for US$249.99.

Ciber
It all sounds good but if it requires the Armoury Crate software I'm not buying one.

Apparently, it does.
Posted by Spud1 - Wed 19 May 2021 13:59
I'm a big fan of detachable numpads - I first had that setup with my old Microsoft Sidewinder keyboard 16 years ago and it's great to see them come back.

I'm currently switching between two keyboards to sole the problem as i have a Huntsman TKL for gaming and a full sized one for work (where the numpad comes in useful!) but its a rather expensive way to solve the problem, so good to see mechanical keyboards with the detachable feature coming to the market ;)

This was less of an issue prior to working from home (one keyboard was paid for by and lived at work then…so its not quite as extravagant as it may seem!) but given that i'm not likely to even be 100% back at the office, things are a bit different and I can see the need again!