Asus has launched a compact new wireless gaming keyboard. So far so ordinary, but the new Asus ROG Falchion has a number of other significant charms such as an interactive touch panel, per key RGB lighting, Cherry MX RGB switches, and a 2.4GHz RF receiver with 1ms response time, with the keyboard running for up to 400 hours untethered*.

Starting with the basics, the Asus ROG Falchion makes use of a 65 per cent keyboard layout. It sports 68 keys with some thought put into the layout to make it appealing. For example, the cursor keys are easy to reach and in the traditional inverted T configuration. At the time of writing the tech specs tab of the product pages are unpopulated so I don't have data about the keyboard measurements and weight at hand.

Asus uses the tried and trusted German made Cherry MX RGB mechanical key switches in its design. It asserts that these provide precision and tactile feedback but I'm not sure whether there will be choices for the consumer here (blue, red, brown or other switch types). Yes, these are RGB lighting friendly keys and this will be the first RGB wireless keyboard to feature per-key RGB lighting with Aura Sync technology. For the keyboard layout check the images, and I would hope that the UK version will have a horizontally flipped L-shaped enter key.

On the topic of input, Asus has implemented an interactive touch panel to the left of the keyboard. I'd call this an RGB touch strip rather than panel as it is a long and thin backlit strip. Asus doesn't elaborate on its functionality at this time. I would guess most will use it as a audio volume slider, with the light bar length representing the volume level. Surely it will be customisable for other functions too. 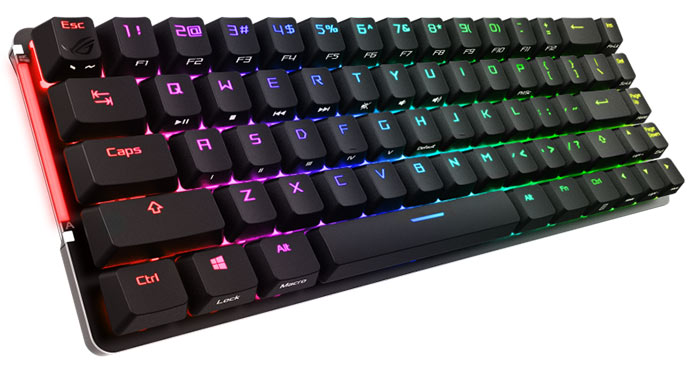 Your input will be read at 1ms via the supplied dongle using 2.4GHz RF tech. Asus says that this wireless gaming keyboard stores enough charge for 400 hours untethered use. Guess what, * that figure is for usage with RGB lighting turned off, but it is the only figure provided.

As a keyboard built for portability, as well as its minimal footprint, it is pleasing that the Asus ROG Falchion comes supplied with a rigid top cover.

We are still awaiting information about pricing and availability.

QuorTek
it is wireless, too much latency to be called a gaming keyboard, however… it would be nice for multimedia and casual RPG gaming.

we have zero latency wireless mouses so why not keyboards?