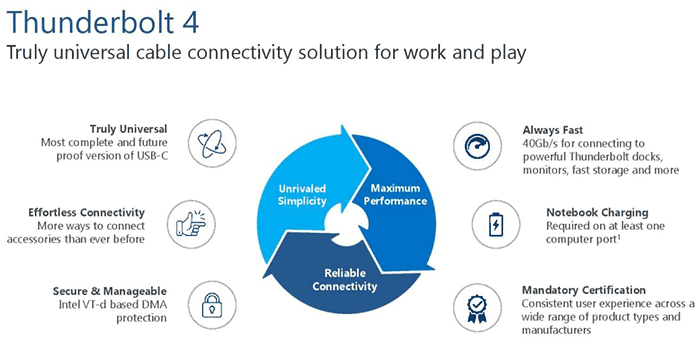 Thunderbolt 4 will be an integrated feature of the upcoming Intel Tiger Lake processors but users of other processors / platforms will be able to hop on board using the Thunderbolt 4 controller 8000 series (JHL8540 and JHL8340 host controllers for computer makers, and JHL8440 device controller for accessory makers). Thunderbolt 4 developer kits and certification testing kits are now available too.

In the video above you can see a Tiger Lake laptop in action connected to multiple 4K monitors, an external fast SSD, power, and more - via a single Thunderbolt 4 connection from PC to a slim dock. The presenter stresses how compact the docks are, how they support up to 4 Thunderbolt 4 ports, as well as various traditional PC ports, and that new certified cables can be up to 2m long. Intel is targeting certified cable lengths between 5 and 50m in the coming year. 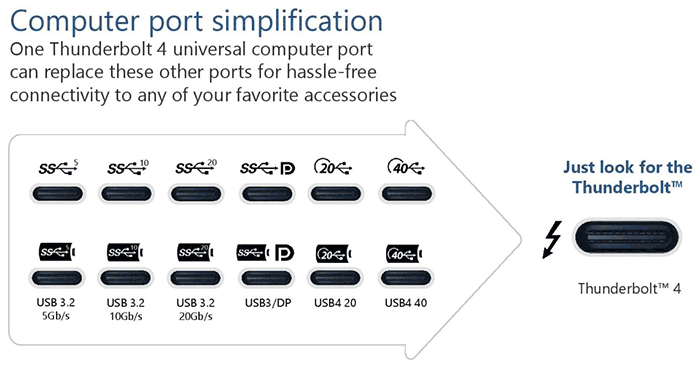 Intel says it has built upon the foundation of Thunderbolt 3 to design Thunderbolt 4, and it is a simplified more universal offering, so that certified devices will provide:

To make the new generation connectivity proposition clearer Intel has put together a summary and comparison chart which is embedded below. 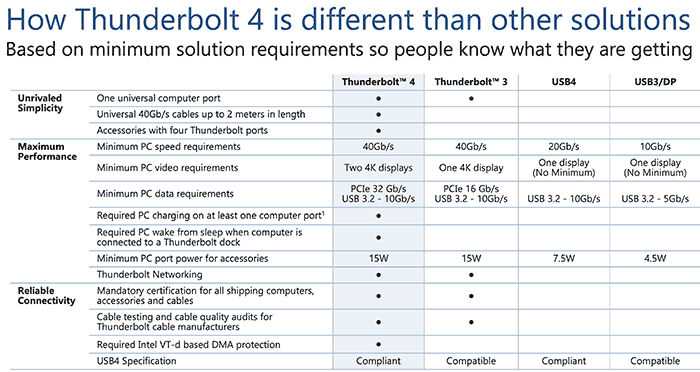 As mentioned above, expect the first Thunderbolt 4 devices to become available this year alongside and/or shortly after the launch of Tiger Lake laptops.

Posted by chj - Thu 09 Jul 2020 10:24
The table is a little misleading, since there's going to be a 40Gb/s USB4 standard (USB4 Gen 3×2). I love the USB-IF's naming schemes.
Posted by Tabbykatze - Thu 09 Jul 2020 11:01
TB4 is completely misleading, it is realistically just TB3 with tighter minimum speeds so they can “rubber stamp” and continue to make money off the branding. USB4 has the same capabilities but a lower minimum specification for transfers.

Intels marketing is so gnarly and dirty.
Posted by gagaga - Thu 09 Jul 2020 11:14
Good - let's have better support on desktops though, especially NUC type devices (eg to allow them to accept power over thunderbolt).
Posted by QuorTek - Thu 09 Jul 2020 16:56
Dunno we need standards set by world wide laws… both on CPU/GPU/Plug 'n play/connectors and whatever else more… because no one is going to keep on paying maximum for a feature that probably never really am going to be used anyway.

Forced standards is a requirement today.. instead of then this did that and vice versa… and now we can do this… but nuh uhhh… the competitor can not have this for the next 5 years… an us consumers having to be in the middle not knowing if we should feel forced to for an instance get a gsynch monitor, freesynch or adaptive synch one… haha someone should tell them monitor manufactorers to provide both… they could all sell much much more if they can agree on some standards and it would benefit the customers as well with quality products that does not cost an arm and a leg…. and thus be able to sell more and grand a better growth in each company… make happy shareholders… give competion to the consoles in a wider scale… I remember when a good GFX card was inside the affordable range for even the lower budget, and was mostly due to that people could go more with actual standards back in the day… should I mention a brand like 3Dfx Voodoo I and II paired with eg. a Matrox G200? or similar? We yet have to have a proper GFX card at a Normal price that can run 4K any game in ultra at 85FPS min still… so overall the industri no matter what fancy name they put out there is litterally a joke a big joke… and the consumer is stuck in between… it is like when Turbo became a thing.. they put turbo on everything…. sun glasses shirts… drinks…