There seemed to be a time back in the late 90s early 2000s where mechanical keyboards were unfashionable relics but now, and I think it has a lot to do with gaming, there appears to be more choice than ever. Over recent years keyswitch and keyboard stalwart Cherry has had its market impinged upon from all sides. Important partners of the firm like Logitech and Razer now promote their own keyswitch designs to enthusiasts, and at the cheaper end of the market there are alternatives from the likes of Gateron, Kailh and Outemu.

Today it looks like Cherry has fired a salvo at the value entrants in the form of its new Viola mechanical keyswitches aimed at "premium value keyboards". However, Cherry doesn't mention the competition in its materials, rather it promotes Viola as a keyswitch that can elbow out "entry-level technologies such as rubber domes and hybrid solutions". Compared to those alternative, Cheery says, the Viola switches "represents a significantly higher quality alternative," with improved reliability, typing feel and durability.

Cherry says that the Viola keyswitches have been created from scratch with a minimalist solder-free design. Users can hot-swap keys, the V-shape contact system is self cleaning, the keys are manufactured to high precision with <0.01mm tolerance, they are wobble and scratch free. 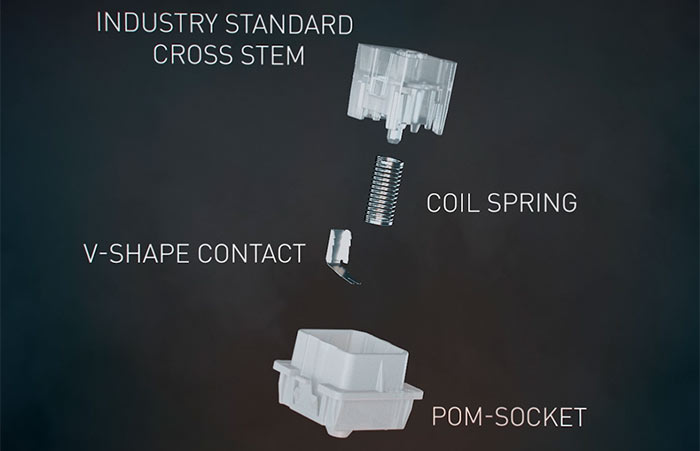 Another notable benefit of Cherry Viola designs is their use of the common industrial standard stem for worldwide compatibility with commonly used key caps with cross receptacle.

What about feel - this is something of great importance to mechanical keyboard aficionados? Cherry says that the new Viola keyswitches offer a two-stage, linear actuation and it has defined this feel as 'CrossLinear'. Explaining the action further, Cherry says that "an actuation force of 45cN is required for the pretravel of two millimetres. After that, the actuation force ramps up to 75cN at the end of the travel distance (four millimetres)". Apparently this delivers ergonomic overtravel and fast reset. Interestingly there appears to be just the one type of keyswitch at the time of writing - no choice of Red, Blue, Brown actuation/click profiles, for example…

RGB LED frills aren't ignored, even though Cherry is looking at the premium value market with these components. The new keys are claimed to be optimised for use with monochrome or RGB-capable SMD LEDs. Thanks to Cherry's design though, compact light-emitting diodes can be mounted directly on the circuit board of the keyboard for cost-efficient, fully automated production. 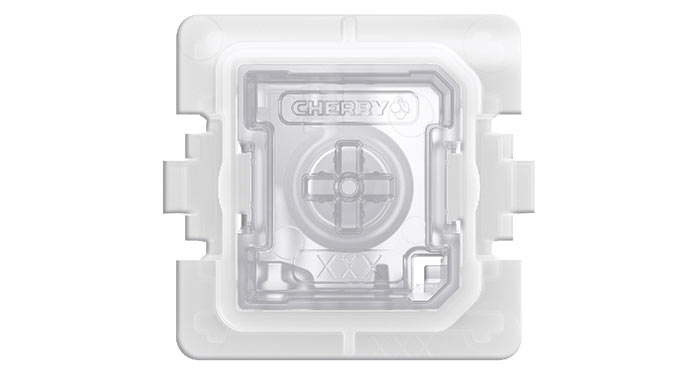 Last but not least, Cherry says that all Viola switches are designed and manufactured in Germany at its factory which implements strict, permanent quality checks - guaranteeing reliability and precision. I look forward to being able to give one of the new keyboards fitted with Cherry Viola keyswitnches a bash (typing this on a crowdfunded Drevo Blademaster with Gateron Blue keyswitches).

hexus
Cherry says that the Viola keyswitches have been created from scratch with a minimalist solder-free design. Users can hot-swap keys, the V-shape contact system is self cleaning, the keys are manufactured to high precision with <0.01mm tolerance, they are wobble and scratch free.

Wobble and scratch free are not often used in the context of violas ;)