Graphics firm 3dfx was a pioneer in PC 3D acceleration and ploughed a deep furrow in the PC industry from about 1996, until it went insolvent in 2000. Just before the lights went out it launched the Voodoo 5 5500, one of a quartet of VSA-100 GPU-based graphics cards that it had showed off at Comdex, Las Vegas, in November 1999. You can read the HEXUS review of the Voodoo 5 5500 if you want a trip down memory lane.

At the aforementioned Comdex event, 3dfx showcased the VSA-100 processor including the products Voodoo 4 4500, Voodoo 5 5000/5500 and Voodoo 5 6000. The graphics chip was codenamed Napalm, packed in about 14 million transistors, and was built on the 250nm process. One of the goals of the VSA-100 was scalability (VSA = Voodoo Scalable Architecture) and thus the Voodoo 4 4500 was the only SKU with one VSA-100, the Voodoo 5 5000/5500 used a pair of these processors, and the Voodoo 5 6000 was slated to pack in four VSA-100 chips – but it never arrived in commercial quantities. Only about a thousand Voodoo 5 6000 graphics cards were produced in an initial batch, and they hardly ever turn up on the used market. 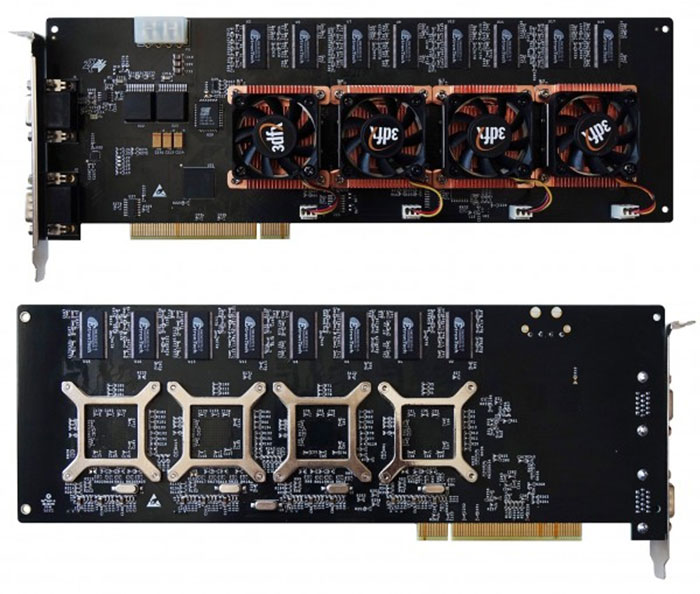 Earlier this week a modder and enthusiast called Anthony revealed that he had built his own Voodoo 5 6000 graphics card by purchasing a number of VSA-100 chips, SDRAM modules, and applying a sizable pinch of electrical engineering know-how. The finished full working sample is pictured above.

HotHardware noticed the achievement a few hours ago and reports that Anthony created his Voodoo 5 6000 by reverse engineering an original 3dfx sample (without any harm done to this sample, stresses the modder). He created his own custom PCB and even improved the design by fitting a 4-pin Molex power connector, so an external power brick wouldn't be needed.

Anthony says his home-made Voodoo 5 6000 graphics card performs exactly like an authentic Voodoo 5 6000, with the "same BIOSes, same drivers, same bugs". The bugs might have been what caused the no-show of the Voodoo 5 6000, as they included problems which meant the AGP x4 slot on some motherboards would only work at x2 with this card, and there were colour distortion and artefacts visible in various games, as well as other annoying glitches present. 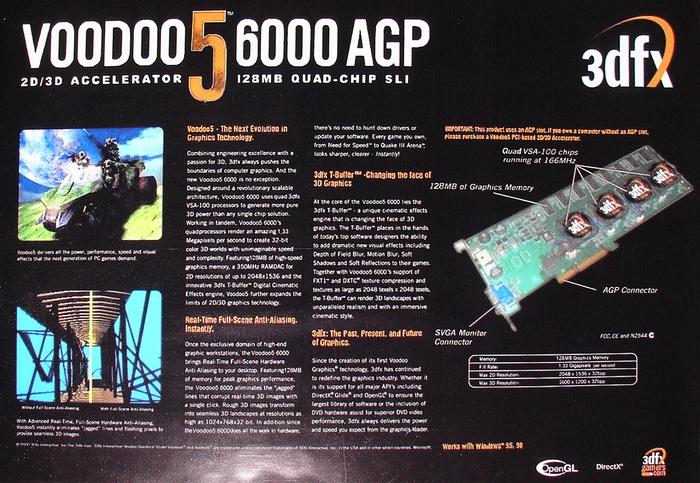 The components Anthony used to build his Voodoo 5 6000 sound pretty cheap; each VSA-100 was under US$20, and the sixteen 8MB 166MHz SDRAM modules are cheap or salvageable from old equipment, as were heatsinks, small fans and so on. Meanwhile, a hard-to-find original could set you back $1,500 or more, as an iconic piece of computer history.

3dcandy
but will it run crysis?

I remember 3dfx Voodoo… think there's an old game I have and wanted to play a while back, needing this. But couldn't get the game to work.

3dcandy
but will it run crysis?

Not likely, wasn't crysis a GeForce game? so long ago… But bet it'll happily run Half-Life