Noctua's development of a passive CPU cooler is turning into quite a saga. The last time HEXUS reported on this long-awaited product was back in July last year when we heard that the product had been "pushed back to Q1 2021." Obviously that chilly quarter has come and gone, but in the meantime, there has been an update to the timescale and a revealing interview with a Noctua exec to chew over.

A semi-official update on the timescale of the unnamed passive CPU cooler from Noctua is quite pleasing as it is claimed to be "coming very soon". A Noctua social media manager made this comment in response to a Tweet by Fanless Tech, which was highlighting an interview published by Relaxed Tech. The interview was with Jakob Dellinger, the press and PR manager at Noctua. 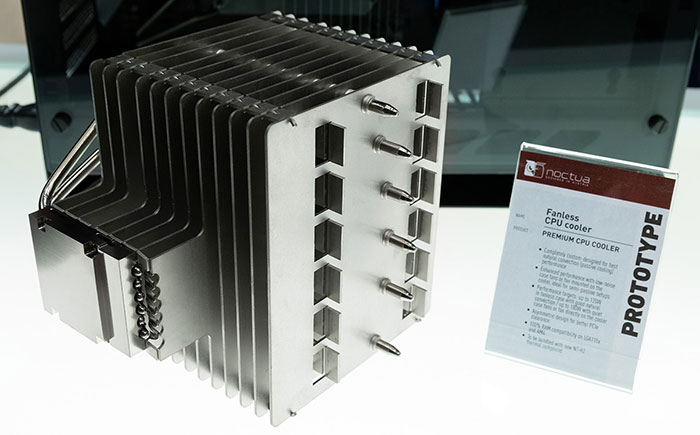 In the Dellinger interview we get some insight into the thought and development tasks behind the upcoming passive CPU cooler from Noctua. It is made clear that you can't really just use a bulked-up passive radiator design from an active cooler for an optimal solution.

"The key challenge is that for a passive cooler to be truly effective, design parameters such as fin pitch and fin thickness need to be quite different," Dellinger told Relaxed Tech. "You need a certain pitch to get low enough flow resistance for sufficient natural convection and a certain fin thickness in order to get the mass that is required for absorbing enough thermal energy. This means that different manufacturing machinery is required, e.g. much stronger stamping presses, etc."

Later in the interview Dellinger revealed that new cost-effective machinery, necessary to the task described above was a challenge to acquire. However, it seems like Noctua has dangled this passive cooler for long enough to be aware of all the enthusiasts that are interested in the "beauty and simplicity to going completely fanless.. [and] the bliss of complete silence".

Tabbykatze
I just don't get why that something like this would even be considered, I am almost certainly not the target market for this type of cooler I suspect…

Lower wattage cpus mean you can almost get a silent system. I imagine you'd be able to get a system that only needs a temp controlled intake fan and a temp controlled psu fan soon - plenty of people I know would like that. I do audio recording and mics pick up fan noise very very well….
Posted by ksdp37 - Tue 18 May 2021 14:04
Wonder what the max TDP on this cooler is? Seems unlikely suitable for performance CPU's, especially the likes of AMD, which tend to run much hotter even at idle.

My 5900x itself idles at 50c with the fan on low setting to minimise noise.. Takes me back to the Pentium 4 days with the heat it generates.

3dcandy
Lower wattage cpus mean you can almost get a silent system. I imagine you'd be able to get a system that only needs a temp controlled intake fan and a temp controlled psu fan soon - plenty of people I know would like that. I do audio recording and mics pick up fan noise very very well….

I get that, I set up a live demo system for the products the company sells and making sure the system was quiet was a must. But in the next iteration of our recording room, it will go into a sound proof cabinet. Similar with getting sound baffling in a case or getting a cabinet/setup where you can sound proof it would make more sense to me because the cooler looks absolutely massive.

To me, a decent water loop with maglev static pressure fans would be good enough as my system is currently. But then again, i'm not an extreme audiophile and am already losing my high range hearing so I guess I'm in the bottom rung for that!
Posted by greg1970 - Tue 18 May 2021 15:35
My PC uses less than 90 watt and has passive cooling and APU graphics, SSD.

Totally silent PC which can do normal desktop-stuff and play some games in FHD (GTA V / WOT).