Water cooling centric company EK Water Blocks has launched a new series of fans based upon its "renowned 120mm EK-Vardar fan," designs. The new EK-Vardar X3M is now available to order in black or white, with your choice of non-RGB and aRGB variants (€5 difference). A rainbow of corner damper packs has also been made available by EK.

So, what has EK done to revamp its original EK-Vardar designs and create the EK-Vardar X3M series? In an email to HEXUS, EK says that it has made airflow optimisations to the rotor, implemented removable rubber corner dampers (with lots of colour choices) and upgraded RGB fans to addressable D-RGB LEDs. 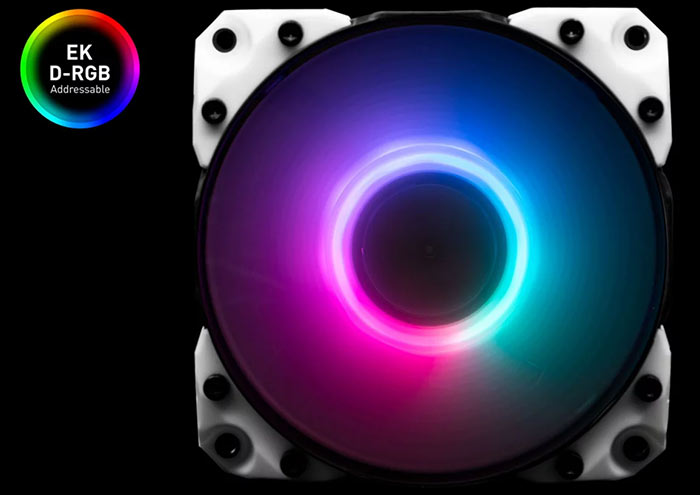 EK's rubber damper design allows for the EK-Vardar X3M 120ER fans to be easily changed from push-to-pull configuration and vice-versa. A new "perfectly balanced 7 fan blade design" is said to be optimized for high-pressure operation, while maintaining a low noise profile throughout the whole operation range of the fan (500-2200rpm). You can use these fans in a true 0dB noise setup. EK says that if you set the minimum threshold point below 25 per cent PWM duty cycle (depending on the motherboard model), the motor and the electronics will turn off and the fan will simply stop spinning. Furthermore, these fans feature dual-ball bearings for quiet durability and mounting flexibility.

The damper packs are also available for the same price in yellow, blue, purple, orange, and red.

EK designs and makes the fans in its facilities in Slovenia. It says that the fans and accessories are available now direct and through its partner resellers.

Posted by Ttaskmaster - Fri 14 Feb 2020 13:29
StatPress isn't bad and airflow is at the lower end of on-par at that level… but they can get stuffed with that volume rating, though!!
Seriously, for those stats even NB eLoops get almost 50% more airflow, while most other fans are a lot quieter…. and EK's wibble about noise, optimised airflow and all that is just wibble, as it depends greatly on what you're making the airflow flow through.
Unless they've optimised these fans for specific radiators, I don't believe a word of their marketing guff and refer people to the Vardar F4-120ER fans, which perform better on all counts.

LED-wise, again other fans offer more, especially in terms of number and addressability. It looks like they've ignored performance in favour of appearance and ended up fluffing both!!

But i have no plans for letting them rip, somewhere between the startup speed of 500 ROM and 1200 i recon will be fine, i am still debating weather to run them at a fixed speed or let the MOBO regulate them according to CPU or the slower fluctuating coolant temperature.
All my 4 radiators are low noise, though the 2 intake ones, well maybe not really low noise as that to me is down around 20 DB, the 2 vent radiators will be 0 DB as they are just venting the air out of the case, and in the process taking a little of the CPU heat with them, before the water head off to the GFX card.
Posted by globalwarning - Mon 17 Feb 2020 16:58
Hmmm…. no info on their actual noise levels. I do like their cross compatibility with control system. I'm so tired of proprietary RGB systems.
Posted by Gentle Viking - Mon 17 Feb 2020 21:36
well many things do that, but just don't get high hopes of you have a gigabyte motherboard.
I have tried for many many months to get it to work ( with compatible hardware and even the on board LED's, and its just garbage ) So i have disabled it in bios.

And before i put this motherboard in its new home, i will also mod the motherboard itself.
Not in a attempt to get the light to work that i have dropped and i will just use a controller and a few RGB light strips though i will probably stick to one color.

globalwarning
Hmmm…. no info on their actual noise levels.


That's just the fan noise wide open, so it's guaranteed to be even louder when you try forcing that airflow through a restriction of any kind.