Qualcomm has announced the latest revision of its Quick Charge technology and this time around it sounds really quick. Claimed to be up to 70 per cent more efficient than its predecessor, Quick Charge 5 is designed to take devices from 0 to 50 per cent battery life in five minutes (4,500mAh reference battery). It is the "world’s first commercial 100W+ charging platform," crows Qualcomm. 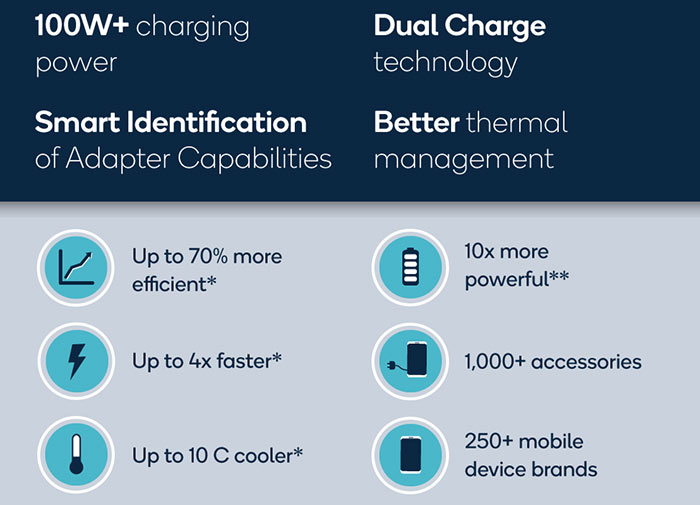 While Quick Charge 5 charges devices at the fast speeds ever, it also keeps safety measures at the forefront thanks to design. Quick Charge 5 incorporates 12 separate voltage, current and temperature protections as well as featuring Qualcomm Battery Saver and the new Qualcomm Smart Identification of adapter capabilities technology. 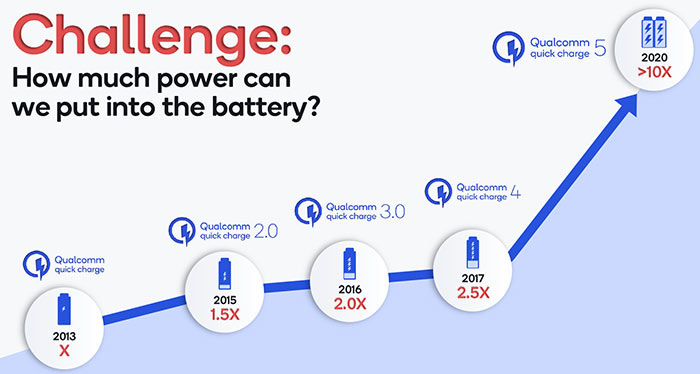 Quick Charge 5 supports 2S batteries (2 batteries in series devices) for double the charging voltage and the increased headline charging speeds. You might be worried that Quick Charge 5, being up to 4x faster than its predecessor at charging (using 2S batteries), may heat up your battery/device. However, Qualcomm says its improved thermal management means charging devices can be up to 10°C cooler.

Interestingly Anandtech notes something not mentioned in the Qualcomm press release: Quick Charge 5 is leveraging the existing USB Power Delivery Programmable Power Supply (PD-PPS) standard (a subset of the existing USB-C PD spec). Thus you won't need a Quick Charge 5 charger to be able to charge your device at Quick Charge 5 speeds. In theory, this means the recent OPPO charger which leverages USB PD-PPS as the protocol should work flawlessly with Quick Charge 5. 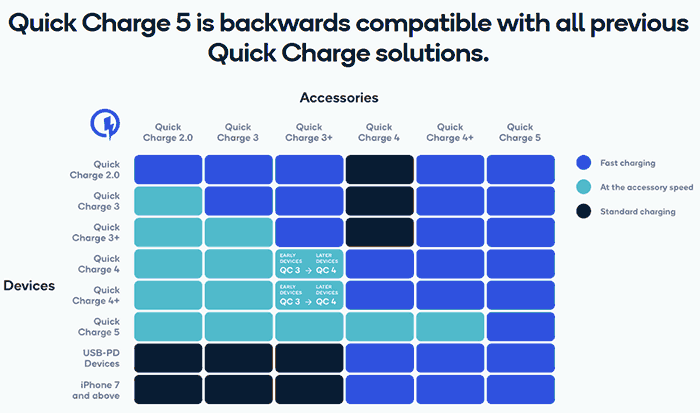 Qualcomm is now introducing its next generation premium tier power management ICs (PMIC), the Qualcomm SMB1396 and SMB1398 to support the standard. Quick Charge 5 is backwards compatible with Quick Charge 2.0, 3.0, 4, 4+ and existing handsets powered by the Qualcomm Snapdragon mobile platform, as charted above. Customers are currently sampling the tech, which is supported by the Snapdragon 865, 865 Plus, and on future premium- and high-tier Snapdragon mobile platforms.

huggi
In all seriousness, if the phones had bigger batteries that would last longer, the need for rapid charging wouldn't be as bad. And I feel like this level of rapid charging is going to affect the battery wear really badly…

I agree but how would all these ‘trendy’ people get their phones in their pockets, they're already struggling due to the fashion of having tight fitting trousers….. the amount of (primarily) women I've seen with a huge ass mobile sticking out of their rear pocket is stupidly high, and it's not all down to small front pockets, although a smaller phone option likely wouldn't hurt.
Posted by 3dcandy - Tue 28 Jul 2020 14:14

rave_alan
A lot of energy in a short time, devices will be hot, hope battery will survive at least a year.

Battery life is measured in cycles and most companies only warranty for a year anyhoo….

huggi
In all seriousness, if the phones had bigger batteries that would last longer, the need for rapid charging wouldn't be as bad. And I feel like this level of rapid charging is going to affect the battery wear really badly…