It seems like many HEXUS readers were interested in the launch of the Valve Steam Deck. We have seen many a compact handheld PC in the news over recent years, and some crowdfunders fail to arrive, while some are very costly, so this well-engineered device priced from $399 has gained worthy attention. With any such announcement we are commonly left with some crucial questions unanswered which the designers can clear up ahead of third party reviews. Over the weekend, Valve responded to some of the most common queries regarding storage.

One of the hottest topics after the announcement was whether the Steam Deck would have upgradable storage. With the pretty hefty cost increases between models – 64Gb eMMC (£349) to 256GB NVMe SSD (£459) to 512GB NVMe SSD (£569) – it was natural to wonder if one could avoid the Apple-esque storage price uplift fees.

In an email shared on Reddit, it appears that Valve's Gabe Newell replied to one user to confirm that the Steam Deck SSD storage comes courtesy of a standard M.2 2230 slot. That is great news for buyers who might want to upgrade someday or are unfortunate enough to face an SSD failure. 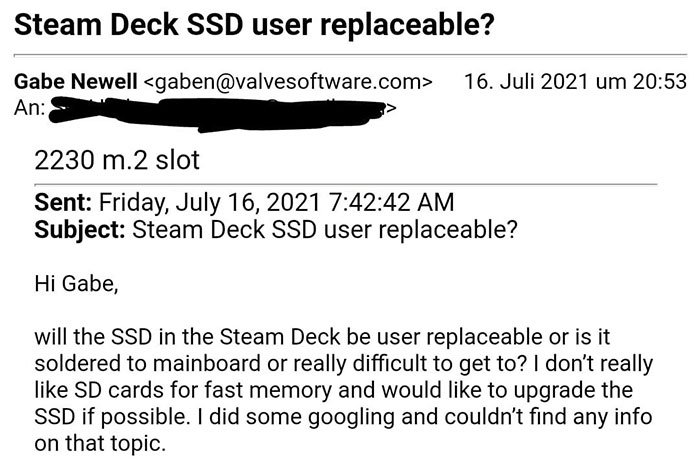 A few caveats must be highlighted with regard to SSD upgrading. Firstly, the drive is an M.2 2230 device, very short compared to the more common M.2 2280 SSD form factor. Remember that this form factor features a 22mm wide key slot, with the length of the stick described by the remaining digits. Due to the more compact form, and being less common, M.2 2230 drives are more expensive for the same capacity as say an M.2 2280 drive. Also, higher capacities are harder to come by, with 512GB the max capacity I could find. 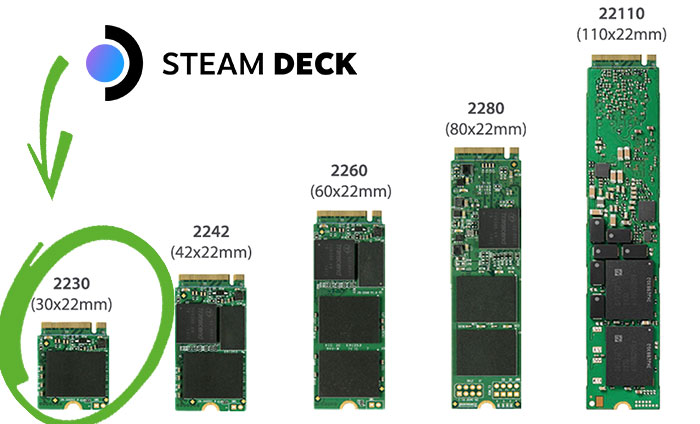 Secondly, the Steam Deck has been built, like many mobile devices, with user upgradability limited to inserting a microSD memory card. The official line is that the supplied SSD is "not intended for end-user replacement," and it is said to be not that easy to access – one must open the device and remove EMI and thermal shielding.

Another thing is that replacing the SSD would require you clone your existing SteamOS for transfer, or re-install it from scratch on the new drive, somehow. 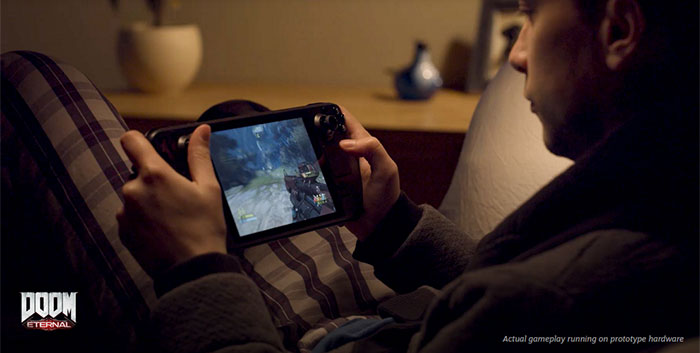 According to the Steam Store, Doom Eternal requires 80GB of free storage space to install

Moving onto another popular question among the thrifty – Can you upgrade the $399 eMMC 64GB version with an SSD? Again, Gabe Newell replied to a Reddit user with a simple confirmation. I'm not sure if that means that you can add an M.2 2230 drive to boost the capacity of your 64GB eMMC machine, or Valve uses a 64GB eMMC on an M.2 stick on the lowest storage capacity Steam Deck - in which case it is another switcheroo job.

I'll be honest expansion from the 64gb eMMC was my big question so colour me tempted. I've swap headphone ports on switches and batteries in ipads and this sounds much easier.

cheesemp
Is that the same size as the Xbox series internal card? If so hopefully more users of the size will hopefully bring down prices?

I'll be honest expansion from the 64gb eMMC was my big question so colour me tempted. I've swap headphone ports on switches and batteries in ipads and this sounds much easier.

Surprised Microsoft limited themselves to 2230.
Not that 2230 would cost them more as they have the volumes, but it limits their max capacity, max speed (SSDs are parallel) and max heat dispersion.
Sony didn't limit themselves and hence have a faster disk system. Looking at a PS5 teardown, Sony supports everything from 2280 downwards: 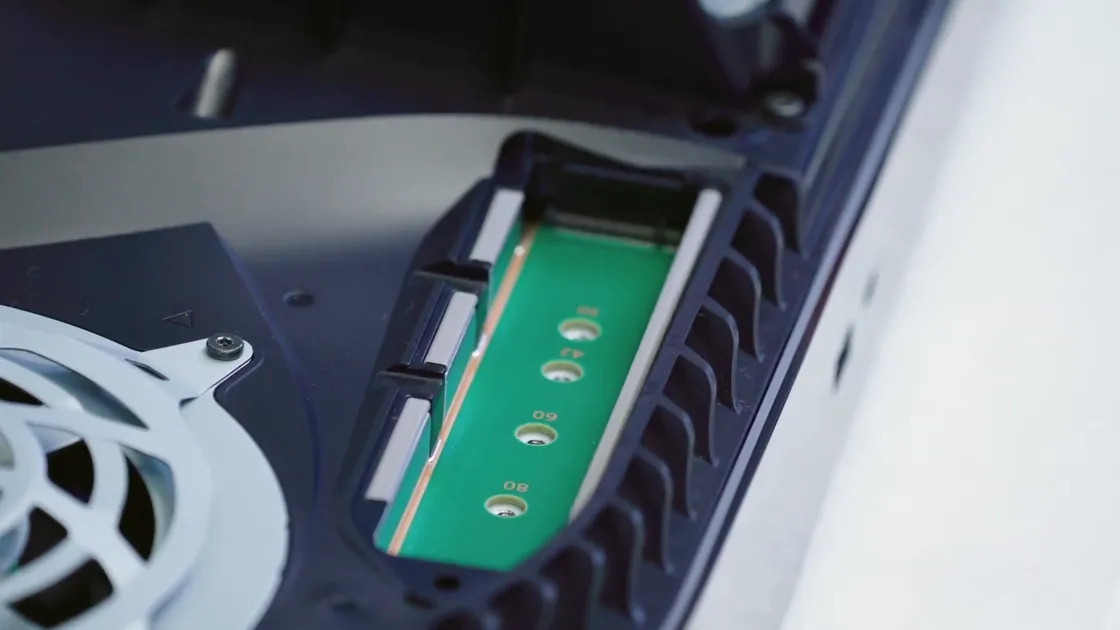 3dcandy
so in all reality the answer is no

The answer is yes. If you're comfortable swapping a 2.5" drive in a laptop you can probably do this. You might need some m.2 nvme to USB enclosures for copying data over if there's no re-install path. You might also need to temporarily remove some parts like the heatsink or a wifi antenna if they get in the way.

CampGareth
The answer is yes. If you're comfortable swapping a 2.5" drive in a laptop you can probably do this. You might need some m.2 nvme to USB enclosures for copying data over if there's no re-install path. You might also need to temporarily remove some parts like the heatsink or a wifi antenna if they get in the way.

And void the warranty? Can't see any chance the warranty would stay intact - so for me, despite the fact I'm happy to do it I wouldn't as I can't afford an expensive paperweight at the moment