A smartphone featuring an extending slide-out screen was being readied by TCL for unveiling at MWC 2020. The interesting new prototype takes flexible screens in a different direction to current trends being established by the likes of Motorola and Samsung. According to CNet's insider sources, the screen of the TCL prototype extends from traditional candy bar smartphone dimensions to tablet via a slider mechanism. 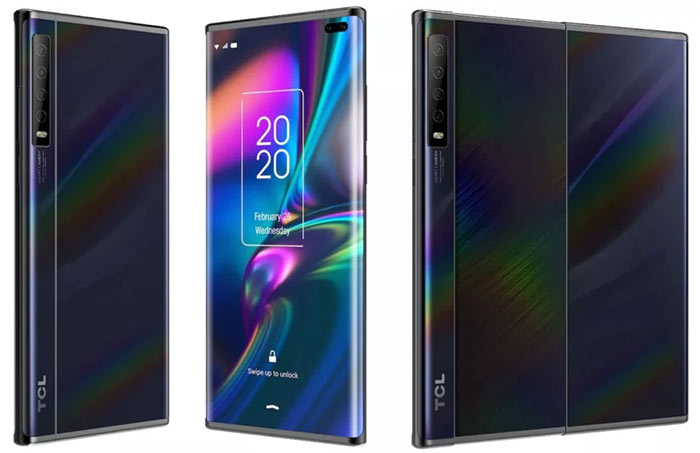 The source publication has shared plenty of images of the TCL prototype in good quality. However, the lack of any video / animation material makes it unclear how the screen extension mechanism operates. The folding open and shut of the rival flexi-screen clamshell designs causes creasing in the display, even when 'flexible glass' is used. So it will be interesting to see if TCL'[s solution doesn't suffer from similar eyeball distracting flaws. 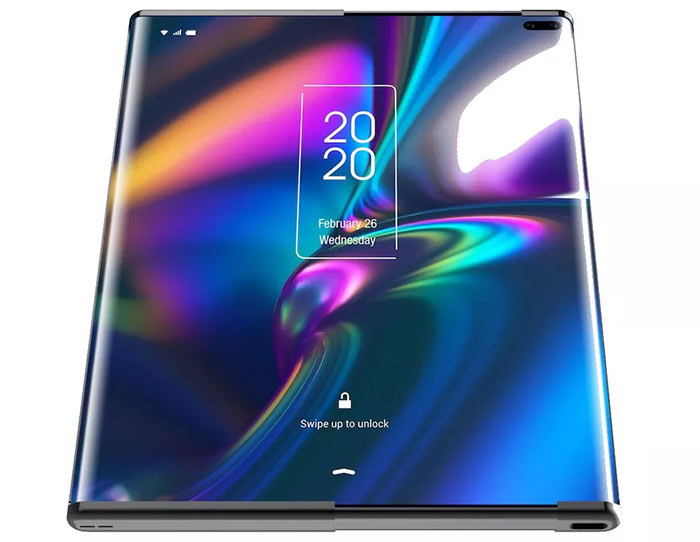 In the rendered images the front of the phone doesn't appear to suffer from any unrolling artefacts - but that is the nature of a promotional render. On the back you can clearly see the chassis seam which extends from the TCL logo and camera section when opened up. The extending screen mechanism is likely to make this smartphone a bit chunkier than usual. Furthermore, there looks to be an uncomfortable looking ex posed edge to the top and bottom front face of the device once unfurled.

Despite MWC 2020's cancellation (it was scheduled to run from 24th to 27th February), perhaps we should expect the usual tidal wave of mobile device press releases between those dates. If I get any more material or videos from TCL next week I will embed them or link to them below. Looking at the imagery, it may be revealed next Wednesday, 26th Feb. TCL is best known in the west for its Alcatel and Blackberry brands.

HEXUS
However, the lack of any video / animation material makes it unclear how the screen extension mechanism operates

Aw come on… It blatantly rolls up along the slider section edge. That's why it has curved edges like a Galaxy Edge phone. One of those is the roller around which the screen rolls, as the slider slides in behind.
I think even Mr Tyson knows this, though perhaps cannot officially say so, which is why "the front of the phone doesn't appear to suffer from any unrolling artefacts"…. ;)
Posted by Gentle Viking - Tue 18 Feb 2020 16:40
The “roller” got to be on the left side, it cant really be on the right side as the camera arrays are there.
I think it will be awkward to open / close.

It would be nice if the mechanism was spring loaded so it have to lock in place when you open it, sort of like old roller blinders, so to open them ( or in this case close the phone ) all you have to do is pull a little in it and the spring will pull the devise together.

And since the back side are clear metal you should be good, but upside down and the friction to the screen the devise might fall from your hand.
Posted by Skyflier - Tue 18 Feb 2020 17:28
I do wish phone manufactures would stop with all this folding/sliding screen garbage.

It's like they were bored on a Friday afternoon and said “Hey, remember 15/20 years ago when flip phones were cool, let do that with a smartphone!” Then a few weeks later bought it up at board meeting and ran with it because they've run out of practical ideas & innovation.
Posted by big_hairy_rob - Tue 18 Feb 2020 18:16
I don't want either. I'm not interested in buying either. Please just make phones that are worth their money and not just a bloomin' gimmick
Posted by edmundhonda - Tue 18 Feb 2020 19:44
As if a single simple hinge wasn't a big enough engineering disaster.