It appears to be the case that the UK tech sector is booming, with innovative financial tech, health tech, logistics tech, food tech, and gaming companies valued over US$1bn reaching beyond the century mark. In business / investor circles, these highly valued companies are dubbed 'tech unicorns'. 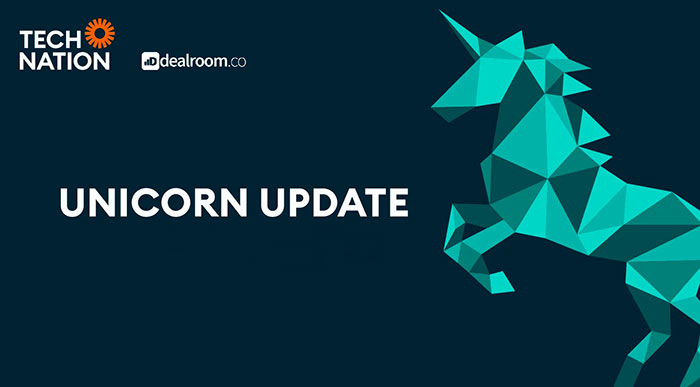 The UK has now joined the US and China as a nation with triple-digit tech unicorns. It is quite an achievement, and it makes the UK a strong leader in tech in Europe, with more tech unicorns than Germany (42), France (22) and the Netherlands (18) combined. A contrarian view might be that tech firms on the UK stock market are somewhat overvalued, in a bubble, but let us forget that for now. 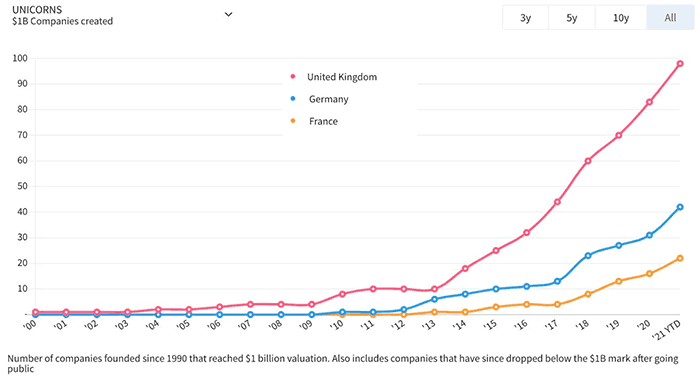 The above chart shows that a tech startup boom has gathered pace in Europe starting from about 2014. UK entrepreneurs haven't stalled since that lift-off, but it looks like Germany and France didn't really get a grasp of the potential of emerging tech until 2016 or 2017. Another perspective from that chart, could be that the growth in tech unicorns in continental Europe might be due to some UK start-ups moving after the Brexit vote. There has been a big move that way (and to Ireland) especially in the fintech sector, according to multiple financial news reports.

The UK's 100th tech unicorn is Tractable, an AI startup building computer vision tools, which reached the magic $1bn valuation yesterday as it completed a $60 million Series D raise. In 2021, the UK has seen 13 tech unicorns spreads their wings – which compared very favourably to a total of seven created in the whole of 2020. Global startup data provider Dealroom.co observes that "UK tech unicorn creation has increased by 127 per cent since 2017, when the UK was home to 44 tech unicorns". 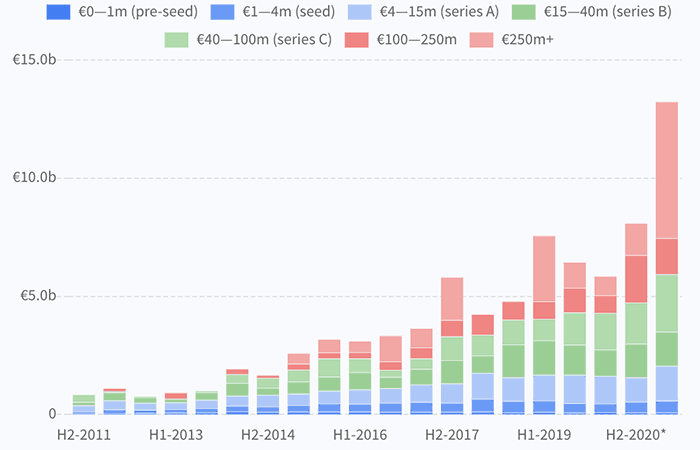 It is also interesting to see the tech business type, broken down into sectors. Figures show fintech (financial technology) is a very strong suit for the UK with 34 per cent of UK tech unicorns noted to be fintech companies, 14 per cent health tech, 8 per cent travel and transport tech, 5 per cent food tech and 4 per cent gaming. Scaleup accelerator Tech Nation notes UK tech startups have raised €13.2bn ($14.5bn) since the start of the year, beating the previous record of €8.1B ($8.9bn) (H2 2020), with two weeks still left to go.

"Smashing through this milestone cements the UK's place as one of the world's top tech hubs, said Digital Secretary, Oliver Dowden, who went on to claim that "The government is backing our brilliant innovators and entrepreneurs by investing in world-class digital infrastructure and people's skills, so that we can create hundreds of thousands of new jobs."