Most HEXUS readers will be well aware that Bitcoin has been reaching new highs over recent weeks. Very significantly it has a gravitational pull on other crytocurrencies, sparking similar valuation increases in the likes of Ethereum – a major contributing factor to the Ampere and RDNA 2 GPU drought we are currently suffering from.

On Tuesday BTC reached new highs, breaking above US$50,000 (GB£36,000) for the first time in its history. It is a major psychological barrier for BTC to cross, and the continuation of a strong rally that started to gain momentum from approx October 2020. Until that time BTC had coasted along with valuations between about $6k and $10k for months on end. 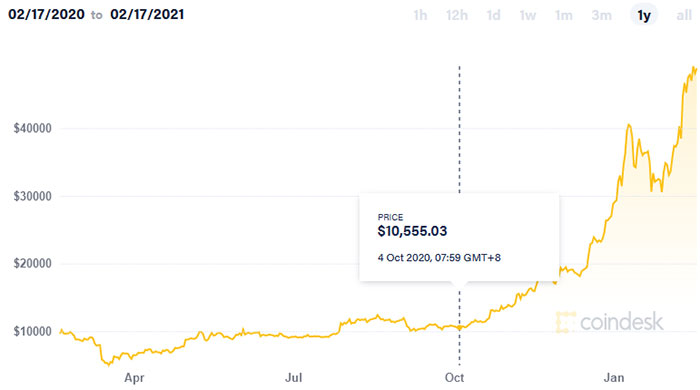 The big question is not about where it has been but – where is BTC going? Of course, we don't know, but this time around the rally seems to have a much stronger foundation with support shown by major firms like Tesla, Mastercard and PayPal. Those are indeed big hitters but CNBC reports on other leading tech innovators still not seeing the appeal of cryptocurrencies like BTC. For example, it talked to Uber CEO Dara Khosrowshahi last week, who said that the company had been considering but "quickly dismissed" the idea of buying BTC.

While the last 'bubble' was seemly driven almost solely by retail speculation (and lost 80 per cent of its value in subsequent months) this time around there seems to be strong demand from the companies noted above, as well as investment institutions. Some analysts think that we won't see such a spike this time around but nothing goes up or down in a straight line, so there are bound to be drips and valleys on the way. For example the $50,000 milestone just reached looks like it has sparked some degree of sell-off as some investors will have set it as a target price. This makes it a 'resistance point' but once convincingly pushed past the rise can speed along again. 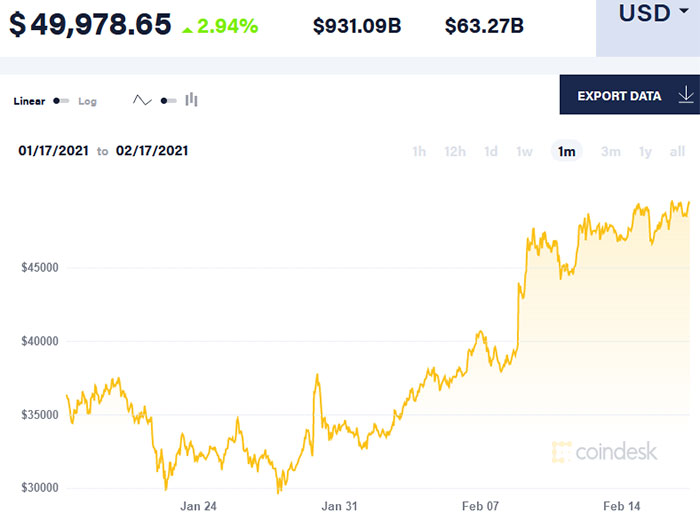 Update: Just an hour before this story goes live I've revisited the BTC charts at CoinDesk, and it says that 1BTC reached a high of $51,348 during the last couple of hours. At the time of this update it is $50,957.

Posted by 007 - Wed 17 Feb 2021 11:02
It has no intrinsic value and it will collapse, it is a matter of time. The sooner the better as fewer people will lose their life savings, often without awareness of being involved. All the ‘serious’ players entering the market are just for short term. They are chancing, they are greed motivated, hoping they would withdraw on time whilst managing to skim some cream. If we passed the law that the CEOs and boards were fully personally liable for all bad decisions they make ( including the long term ones that affect company no longer managed by them, well that's why they are being paid so well ), they would act far more reasonably. The scarce is artificially created and the bitcoin itself is not essential, at least in current form, for anything.
Posted by Corky34 - Wed 17 Feb 2021 11:12
Not disagreeing with crypto currency being a massive bubble of worthlessness but the money in your pocket or bank account also has no intrinsic value. :)
Posted by DanceswithUnix - Wed 17 Feb 2021 11:19
In possibly related moves, in Texas the Samsung foundry has been forced to shut down to to power shortages in the area. Would be ironic if local crypto mining killed production of the ram chips needed for GPUs, but not funny.

Corky34
Not disagreeing with crypto currency being a massive bubble of worthlessness but the money in your pocket or bank account also has no intrinsic value. :)

Bitcoin is backed by nothing, zip, nada, zilch. Pounds, Dollars, etc are backed by nation states which can still fail but is definitely something. Those nations are then backed by other nations and so on. If the US had a big wobble, the dollar would drop but never to nothing as outside nations (China) would buy in propping it up. It's a house of cards which relies on the global economy but it is safe a houses compared to bitcoin.

Bitcoin however definitely is a disaster from the planet. I don't think cryptocurrencies are necessarily inherently bad but one that uses more than the energy requirements of Argentina should not exist.