Market research firm JPR has released its latest report on the state of the global PC gaming hardware market. Due to a number of factors, primarily pandemic inspired, the PCGHW market is set to "surge by $3.6 billion in 2020," says the firm. That is a meaty >10 per cent increase compared to last year.

Gamers are upgrading with new PCs and accessories to bring comfort and joy to their otherwise constricted locked-down lives. Additionally, and perhaps more importantly, according to JPR, the worldwide lockdowns have "created millions of new PC gamers looking for immersive, exciting, and economically efficient forms of home entertainment". Thanks to this convergence "every segment is going up," remarked Ted Pollak, Senior Analyst Gaming Industry at JPR. Company subsidized systems, and even entry level systems are being specced with better parts to double duty as gaming systems, it has been observed. 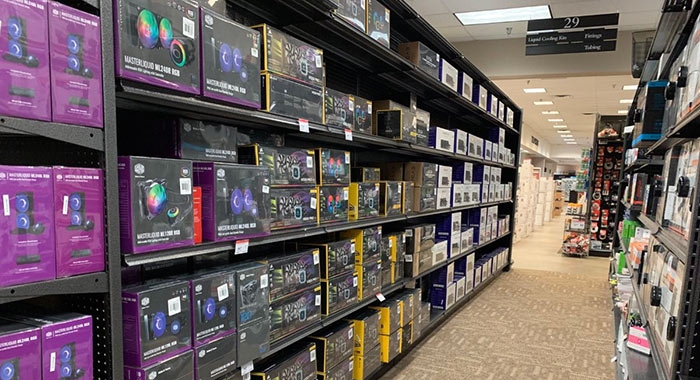 Looking at the PC Gaming Hardware Market segment by segment, the 2020 entry level category is expected to grow an unprecedented >20 per cent, the mid-range has bounced back from its 2019 slide, and high-end gaming demands are sparking "a chain reaction of upgrades," for 1440p+, 60fps+ gameplay intentions.

As we near the end of 2020 JPR expects that the total PCGHW market will be approaching $40bn in value. Unfortunately this surge might not be sustained into 2021. A lot of macroeconomic forecasts are seeing downturns set in and precipitating lots of job losses. Consumer confidence may be hit hard but JPR still predicts growth over the next five years.

Trendfocus has recently released a report about laptop storage trends, via the Storage Newsletter. It charts the penetration of SSDs in consumer laptops over recent years. The key finding is that M.2 PCIe SSDs were the dominant storage medium in laptops sold in 2019. Back in 2014, ye olde 5,400rpm HDD spinners held a similar dominant position but are now very much in the minority. Check out the 2014 and 2019 pie charts below.

The market researchers comment that Apple lead the charge with M.2 SSD adoption. Since 2014 drastic price per GB reductions and favourable consumer experiences have helped make the trend so pronounced. Nevertheless there is still some price pressure with higher capacities so you will generally get lower storage amounts with the SSD, and some vendors try and offer the best of both worlds by mixing a relatively low capacity M.S SSD with a 1TB or above 2.5-inch SATA HDD in their machines. 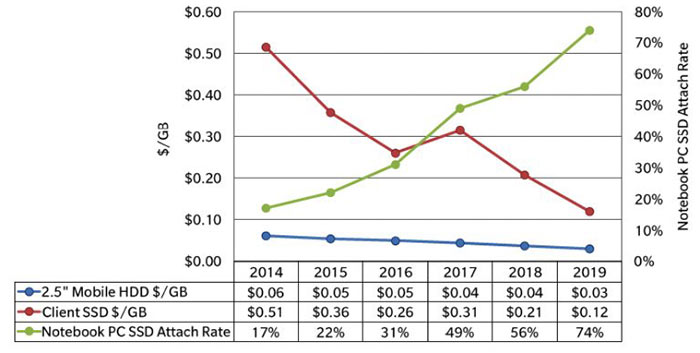