Mercury Research has published its latest quarterly CPU market report. The new report covers the three months ending 31st December 2020, or Q4 2020 for short. Readers may be impressed that AMD has been growing its market share, according to Mercury's findings, for three years straight. However, the latest Mercury Research CPU Share Report appears to show AMD's steady progress by this metric has stalled, or at least hit a bump in the road, as Intel gained back share in Q4 2020. The figures are worth a closer look.

During Intel's most recent earnings call, Bob Swan told investors that he believed that Intel had gained market share in the client CPU market. He observed that as a whole PC CPU shipments were up 33 per cent (for all brands) and must have had internal information indicating that Intel was again on the front foot.

Now the latest Mercury report into CPU market share appears to independently confirm Swan's statement to investors. Intel is obviously happy to see this change in trend, however small it might be. 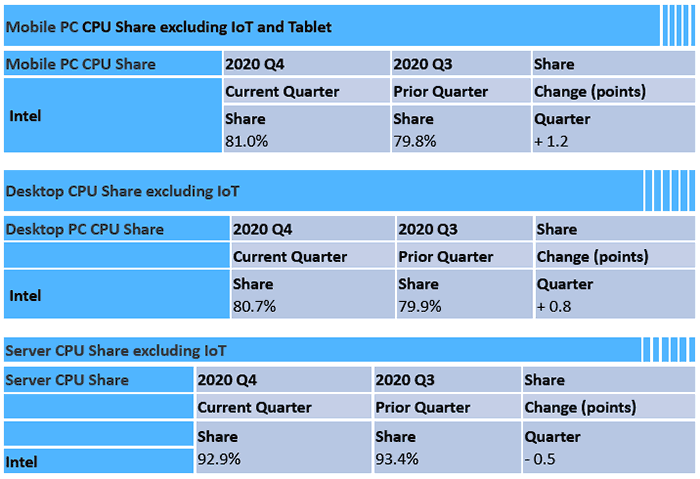 The summary of Q4 2020 is that Intel has clawed back market share as follows:

Trying to look at the bigger picture here, the client PC market has grown very strongly in recent months and both AMD and Intel are benefitting from it, paid testament to by their most recent financial releases. They have both sold many more CPUs than perhaps any other time in their histories. However, Intel's increased production capacity, which it has been building since the last CPU shortage crisis, appears to have worked in its favour in the numbers seen by Mercury Research.

Dean McCarron of Mercury Research, provided the following commentary to Tom's Hardware on the differences in mobile and desktop wins for Intel. McCarron indicated that Intel had good supply of small-core (lower end) chips in mobile, catering for growing markets like Chromebooks. Conversely, on the desktop, Intel's gains were mainly in the large-core shipments. Both mobile and desktop gains were made possible by increased CPU manufacturing capacity at Intel, which, unlike AMD, owns and manages multiple fabrication plants.

In summary, the boom in the PC market over the last few months has been significant enough that both AMD and Intel have done very well off the back of it. One might logically conclude that Intel was positioned slightly better to gain market share over this period with its improved manufacturing capacity.

'[GSV
Trig;4282935']Intel has probably got market share back because you can actually buy their stuff..
NVidia and AMD are lagging on this, even Sony is apparently blaming AMD for PS5 shortages…

So unlike Sony to blame somebody else even when they were shamed into not having enough sensors earlier on in this pandemic for webcam, drones, cameras etc. etc.
Posted by aniilv - Thu 04 Feb 2021 11:09
considering amd has cpu's only for highest end of market thats not unpexpected
Posted by Darkedge - Thu 04 Feb 2021 11:29
Intel much more likely to be in a COTS PC than AMD so as people rush to buy of the shelf PCs to work at home etc they were going to get more share. The fact it's only 0.8 on desktops and 1.2 on lappys is actually really poor performance for them, they should've increased more.
I'd say arguably this shows AMD even stronger.