There are numerous indications that AMD is doing very well in the desktop PC processor market, especially with DIYers. For examples, back in June HEXUS reported on the Mindfactory data showing AMD outselling Intel 87 to 13 per cent in this market, and the monthly Steam Hardware Survey shows an encouraging trend for AMD (but Steam counts all sorts of PCs - from DIY, through pre-built desktop, AiOs, and laptops – which doesn't show as clear an AMD CPU growth trend for now).

AMD recently crossed a PassMark milestone which has been out of reach for the last 15 years (since Q1 2006). Its desktop CPU market share briefly overtook Intel in the PassMark CPU usage data chart. While this is a significant event to see, its scope is rather narrow. PassMark measures the percentage of CPUs running its benchmarks by CPU brand and yesterday AMD overtook Intel for a short period: cresting at 50.8 per cent vs 49.2 per cent for Intel. 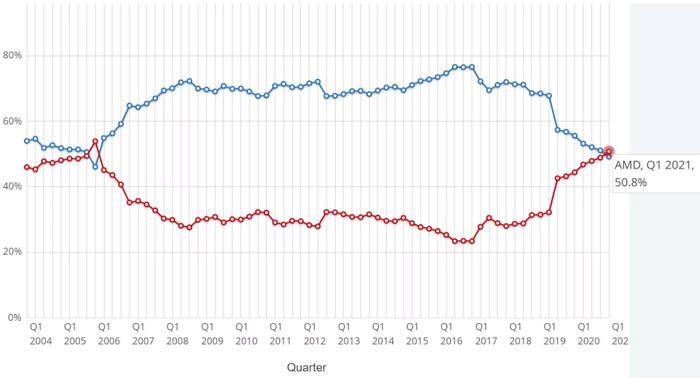 Where you think the PC desktop chart will go next depends on your opinion of the relative merits of AMD's Ryzen 5000 CPUs and Intel's current 11th gen lineup moving to RKL-S (late March). Will AMD be able to better meet demand for Ryzen 5000 CPUs and broaden the range of offerings to capitalise on its current position?

In laptops there remains a huge gulf between Intel and AMD desktop market share in Intel's favour. This will take a long time to change if it is going to happen but we are expecting to see AMD's laptop CPU design wins grow, particularly at the premium end of things, at the imminent CES 2021.

Not quite what the title is saying, but it is an important subset and I think bodes well for AMD's future.
Posted by bae85 - Tue 05 Jan 2021 12:56
Get ready for the Intel fanboy to come steaming in about how their overly expensive Intel CPU disguised as a heater is 2FPS faster despite costing more, needing a new motherboard due to yet another socket change and consuming three times more power. haha
Posted by mers - Tue 05 Jan 2021 13:21
Great performance from AMD of late , depending on your stand point , offering a better product as a whole. The Corvid thing coupled with supply obviously affected by Corvid as well has had a major effect on things. Intels slightly better performance in most games is negliable now and don't forget games for years have been optomised towards Intels architecture and as things progress I think AMD will get stronger in that area as games programmers embrace AMD more. Theres also the fact that AMD is well ahead in chip design and sincerely hope they keep pushing and make Intel really get off their backsides and come up with something rather than keep squeezing the life out of what they had. They poo , pooed the idea of chiplets and now having second thoughts. I'm not a fanboy by any means but have always favoured AMD down the years mainly for value and I don't like to see any company have have a whip hand and charge us poor sods through the nose for it as Intel have done for years. OK , AMD are now effecting higher prices as Intel did ( with a better product to my mind )but thats business after all. I hope Intel don't fall too far behind and actually come up with something worth while as we always need competition to keep a level playing field in the price frame. Anyway , AMD as we know have done exceptionally well with Ryzen and full credit to them as the underdogs , Intel need to really get a new game plan together , their R&D dept need a shake up.