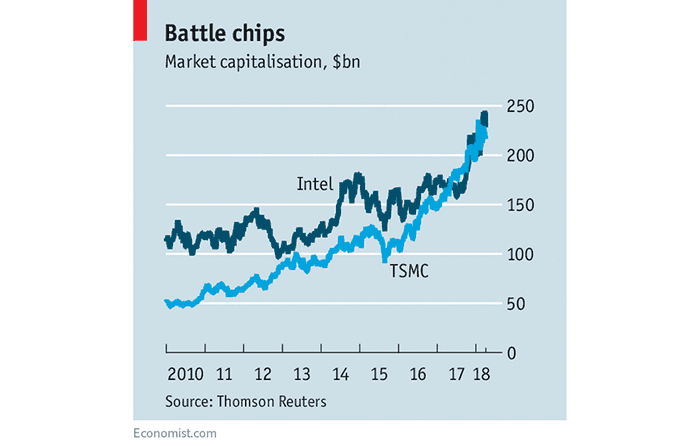 TSMC has been gaining steadily on Intel since around 2015. Graph from Reuters this April.

Breaking down its current figures, TSMC's Q3 revenue was $9.40bn, which is an improvement of >10 per cent YoY, and >21 per cent QoQ. Its advanced 7nm chips accounted for 17 per cent of wafer revenue, its 16nm output for 22 per cent, and 10nm for 2 per cent. "Our third quarter business benefited from new product launches both in premium smartphones and high performance computing applications using TSMC's industry-leading 7-nanometer technology," said Wendell Huang, VP and Chief Financial Officer of TSMC. "We expect the strength of demand for our 7-nanometer technology will continue, driven by high-end smartphones, initial 5G deployment and HPC-related applications."

Barron's garnered some interesting quotes from a report by Bernstein analyst Stacy Rasgon with regard to TSMC's performance and its place in the competitive chip-making landscape. "Intel's process disadvantage is getting worse," opined Rasgon. "While Intel will theoretically have 7nm parts out sometime in 2021...we believe it likely that CPU and other mainstream 7nm parts will not be on the road map until late that year, if not sometime in 2022." Then, by that time, TSMC will be a major 3nm producer.

Intel closing the process gap seems like an insurmountable challenge as things stand. It can hope TSMC drops the ball, but Intel is equally capable of mishaps and missteps.

It's not just the engineers, it's the investment TSMC has in fabrication plants that's a generation or two ahead of Intel.

I just hope Intel don't buy TSMC - it's good for us as consumners, if there's a fierce competition raging (at least it should be if Intel ever get the memo!).
Posted by DanceswithUnix - Mon 21 Oct 2019 12:25

Who says they haven't tried? Intel have a pretty poor reputation for how they treat their employees, so I doubt they would get many if any takers.
Posted by EvilCycle - Mon 21 Oct 2019 16:59
IIRC Intel were outsourcing to TSMC, I didn't follow it to see how it played out though. Has it made a difference?