According to Jon Peddie Research, AMD has enjoyed a bit of a comeback in PC GPU shipments in the most recent quarter. Its data shows that AMD enjoyed a 9.8 per cent surge in shipments, while Nvidia shipments were flat and Intel's declined by 1.4 per cent. This was enough to push AMD's total graphics market share above Nvidia's for the first time since 2014, when the fastest gaming GPU available was the Radeon R9 290X. 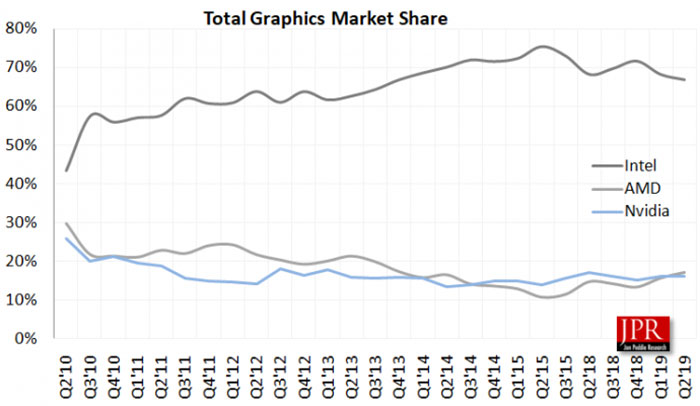 JPR's data shows that in Q2 this year AMD has 17.2 (14.8) per cent of the total graphics market share in PCs, while Nvidia has 16.0 (17.0) per cent and Intel the lion's share at 66.9 (68.2) per cent - figures in brackets are from the same quarter last year. Please note that the above figures are PC market only, including laptops. No games console GPUs, or GPUs sold for other market segments are in these figures.

I would think that AMD's success in Q2 may be down to bargain Polaris graphics cards, particularly the Radeon RX 570 and RX 580, which started to become available at very keen prices a few months ago. These cards may be long in the tooth, and don't have the gloss of support for raytracing or 4K gaming, but offer great bang-for-buck for mainstream modern 1080p to 1440p PC gaming in the popular price segment spanning £120 to £170-ish. 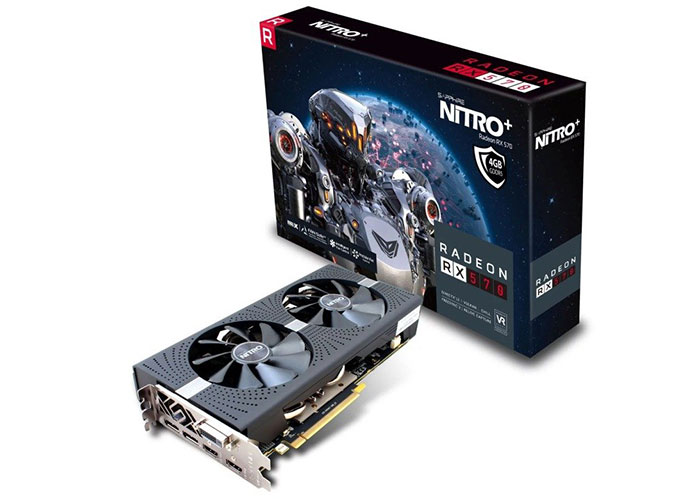 Quick highlights from the latest reports from JPR, as compiled by the market researchers, are bullet pointed below:

Interestingly JPR comments that Q2 usually sees a decline in shipments, and that GPUs are "traditionally a leading indicator of the market, since a GPU goes into every system before it is shipped". This means that PC vendors are/were optimistic about Q3, guiding for an approx 13 per cent increase in shipments.

NVIDIA in… Blue? And then AMD and Intel sharing two incredibly similar shades of grey.
Posted by aniilv - Fri 30 Aug 2019 11:36
This clearly includes Intel, so laptops and internal gpu's mostly making up the numbers, bit a clickbait article. Yes AMD is regaining ground in laptops from intel, so thats where the increase comes. As for external gpus AMD is no challenge to Nvidia..yet
Posted by EvilCycle - Fri 30 Aug 2019 11:43
Whilst the title is technically correct it looks to imply AMD have taken business from Nvidia when that isn't the case, they have actually gained some of Intel's IGPU market share, you can even see it quite clearly on the graph that Intel and AMD's timeline are inverted with eachother.
Posted by zaph0d - Fri 30 Aug 2019 11:57
Yeah I agree, it's likely just the apu sales from the newer ryzen apu's and laptop gpu's that are driving it up a little.
Posted by Tattysnuc - Fri 30 Aug 2019 12:34
How is this helpful? DISCRETE GPUs would surely look VERY different….

This report looks to include Corporate/OEM PCs, almost all of them will have an Intel or AMD chip in them, with some sort of onboard GPU.

Sure, AMD sold a bucket loads of 570's, but they are small fry compared to the corporate OEM markets.

For me this shows that despite a resurgent AMD CPU offering, NVidia are still selling a whole heap of GPU's…. and their discrete GPU's are VERY profitable for them and still holding their own against AMD who have more “channels” to sell their GPUs through…