Corsair's range of One PCs has set a high bar for small-form-factor systems, and though you typically pay a premium for such tight integration, the resulting build is beautifully constructed and outfitted with potent hardware that belies such a petite enclosure.

A hugely attractive piece of kit, of that there's no doubt, yet each iteration has typically fallen short of perfection by missing certain features that users might expect at this price point. These have included super-high-speed storage, front USB-C, faster networking, and full support for the very latest CPUs and GPUs. 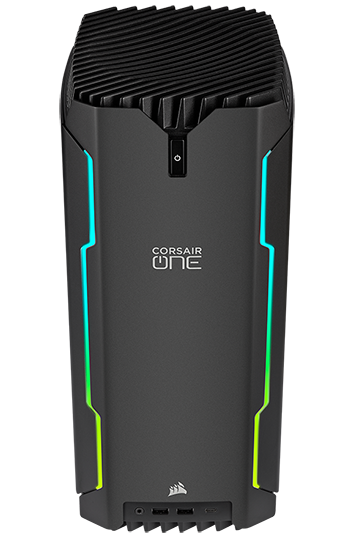 The good news for folk who've waited patiently for Corsair to get everything aligned is that the latest release, the One a200, priced at £3,300, is about as close to perfection as we've seen thus far. This is for all intents and purposes the same compact 200mm x 176mm x 380mm chassis we've come to know and appreciate, only this time it is fully equipped with just about every feature you could ask for.

Corsair's specification is akin to an enthusiast's hymn sheet. Let's start at the top, shall we? Having initially dragged its heels with AMD Ryzen support, the One a200 follows-up the good work of last year's a100 by employing a latest-generation Ryzen 9 5900X processor. The impressive 12-core, 24-thread chip is capable of speeds of up to 4.8GHz and is housed atop an ASRock B550 Phantom Gaming-ITX/ax motherboard touting both 2.5GbE and Wi-Fi 6 connectivity.

Continuing the forward-looking theme, graphics are provided by a 10GB Nvidia GeForce RTX 3080, while ultra-fast storage comes courtesy of a 1TB Corsair MP600 PCIe 4.0 M.2 SSD. As before, 32GB of DDR4-3200 memory is provided by a dual-channel Corsair Vengeance LPX kit, and despite the chassis' tiny footprint, there's still room inside for a 2TB Seagate Barracuda hard disk and a Platinum-rated Corsair SF750 power supply.

Users unfamiliar with the Corsair One cooling configuration may view such a component selection as a recipe for a small-form-factor bonfire. Not quite, as the tower layout is optimised with liquid cooling for both CPU and GPU. Crammed inside is a 120mm x 170mm radiator attached to the CPU waterblock, a 120mm x 240mm radiator attached to the GPU, and a 140mm top exhaust fan that draws hot air up out of the chassis. For those of you sporting a dozen-or-so case fans, take note as the One a200 makes do with just three; the 140 in the roof, another in the power supply, and a third 80mm fan on the graphics card heatsink.

This is close to the exact specification we'd choose for a high-performance, small-form-factor build, however there are obvious considerations when choosing a system as tightly knitted together as this. Getting access to components for future upgrades isn't as straightforward as a regular mid-tower - Corsair has an entire webpage dedicated to the disassembly process - and such a compact rig does attract an inevitable premium. Still, given the cost of certain components these days, we don't imagine many enthusiasts will balk at the £3,300 asking fee, particularly if the benchmark numbers are where they ought to be. Let's take a look, shall we?