Nvidia may have experienced the odd bump or two in bringing GeForce RTX 3080 to retail, but such issues have done little to dampen the card's appeal. It has been a couple of weeks since the £649 GPU smashed through our benchmarks, yet the virtual shelves at every major online retailer lay bare, as manufacturers and distributors struggle to keep up with demand.

A lack of availability presents a challenge for system integrators who are eager to put forth RTX 3080 base units, albeit in the knowledge that there's no clear timeline on when such systems will ship. Still, if you're willing to wait, PCSpecialist's new Gladius R7 looks to do a decent job of providing high-end gaming performance at an attractive £1,999 price point. 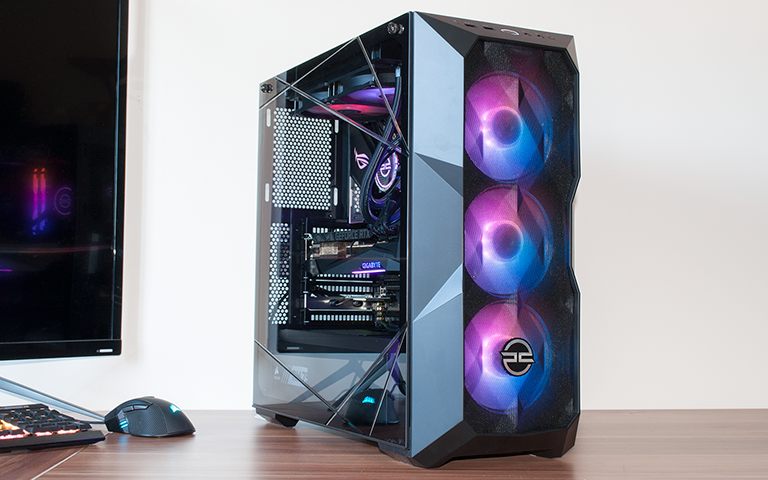 It is interesting to note that system integrators are initially keeping RTX 3080 review units quite simple. There's reason to suggest that Nvidia's brief is to tone it down - few of us expected RTX 3080 to land at £649 - and PCSpecialist continues the affordable high-end theme with an attractive set of components for under two-thousand pounds.

Built into the eye-catching Cooler Master MasterBox TD500 Mesh chassis is an eight-core, 16-thread AMD Ryzen 7 3800XT processor atop an Asus ROG Strix X570-F Gaming motherboard and cooled by a top-mounted PCS Frostflow 240 liquid cooler. It's nice to get the full-fat X570 chipset at this price point, as well as the best Ryzen 7 CPU that AMD has to offer currently, though the accompanying 16GB (2x8GB) of Corsair Vengeance RGB Pro DDR4 memory isn't the quickest at 3,200MHz. Users who like to plan ahead should also note that the motherboard lacks niceties such as 2.5GbE networking, while the chassis doesn't offer front-facing USB Type-C. 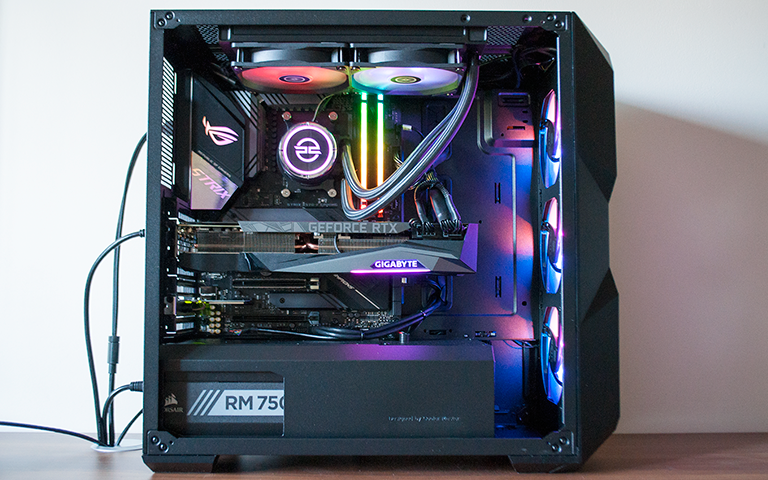 PCSpecialist's GeForce RTX 3080 of choice (or perhaps which card happened to be available) is a factory-overclocked Gigabyte Gaming OC, and rounding out the build is a super-fast 1TB Seagate FireCuda PCIe 4.0 M.2 SSD, a 1TB Seagate Barracuda hard disk and a 750W Corsair RMx power supply that conforms to Nvidia's suggested minimum requirement. There's also a rudimentary Wireless-N PCIe card to help get users online with minimal fuss, and a clean 64-bit install of Windows 10 resides on the SSD.

There's plenty of power in there, yet there's no escaping the fact that the build is strikingly simple and representative of where high-end PCs are headed. The age of precarious overclocking, RAID arrays and multiple graphics cards appears to be behind us. These days, many-core CPUs tend not to benefit from an additional overclock - heightened all-core speeds come at the expense of maximum boost - modern storage devices are insanely fast and slot easily into an M.2 slot, and our experience of the latest crop of GeForce graphics cards suggests that stock (or factory OC) frequencies are the way to go. 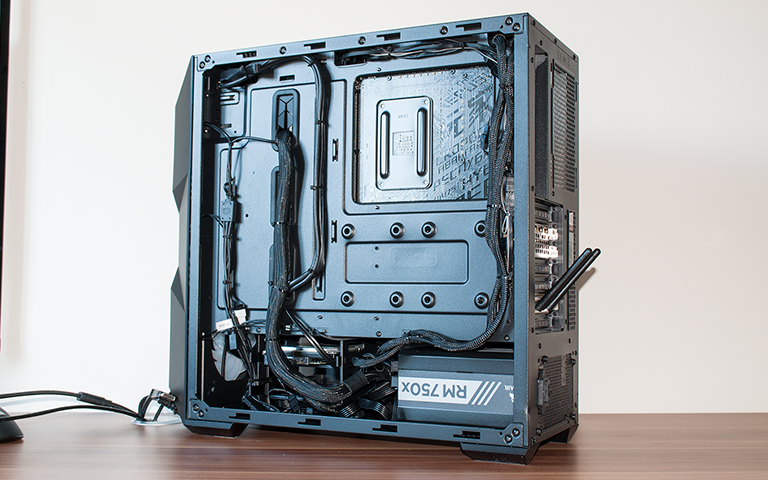 Point is, it's easier than ever to build a stable, high-performance PC, and in order to convince potential customers not to take the DIY route, system integrators need to offer some other form of incentive. PCSpecialist has at least two that spring to mind. Firstly, pricing is keen. A quick scout around various retailers puts the total cost of components, including Windows 10, at around £2,050, meaning you couldn't build it for less. Secondly, the entire system is backed by a three-year warranty as standard, which includes return-to-base for the first month, parts cover for the first 12, and then labour for the remaining two years.

Aggressive pricing is a key attribute, but do be aware that PCSpecialist's review systems are configured as is with no means to customise the core components - what you see is what you get. Don't expect much in terms of fine-tuning, yet as a foundation on which to apply your own optimisations, the Gladius R7 seems a safe starting point. Let's see if the benchmarks concur.