It's pretty easy to build a high-performance PC these days. Grab a decent mid-tower chassis, install a premium AMD Ryzen or Intel Core processor, use whatever RAM is around, and game on GeForce or Radeon. There's no real art into building a regular PC any more.

Yet building a high-performance rig in smaller chassis still requires careful thought and implementation. With even decent PCs pulling no more than 400W under full gaming duress, the opportunity is there, and the likes of Corsair haven taken on this no-compromise approach with the One line of small-yet-powerful rigs.

There are others that play in the same space, and today we're looking at arguably the best implementation of the MSI Prestige P100.

Before we get to the tasty specifications, the Prestige P100 is about twice the overall size as an Xbox One X console. Standing 404mm high, 132mm wide and 372mm deep, it's a substantial bit of kit that tips the scales at 7.71kg. Still firmly in the small-form-factor camp, the 10.36-litre chassis is about one-quarter the size of a regular mid-tower.

The external plastic is of a high quality, coated evenly in a matte white that repels finger marks, and it fits in nicely with other Prestige products such as the PS341WU monitor we've also reviewed this week. Smart in design, there's a full-sized vent at the top for letting hot air out. Both sides - easily removed by two screws apiece - also accommodate heat exhausting through a perforated design.

A three-sided lightbar is positioned inside the front fascia. It shines white by default, though it can be switched to limited RGB effects and even off through the Mystic Light software. We prefer it off because positioned to the right of my PC, the light draws unnecessary attention from the monitor.

You'd want to position it on the right because the connectivity is on the left-hand side, comprising audio ports, USB 2.0 Type-A, 3.1G1 Type-A and 3.1G1 Type-C. The latter is most welcome but we wonder why have USB 2.0 at all on a PC for 2020? Aimed for creators, we're also of the opinion that Thunderbolt ought to be present. 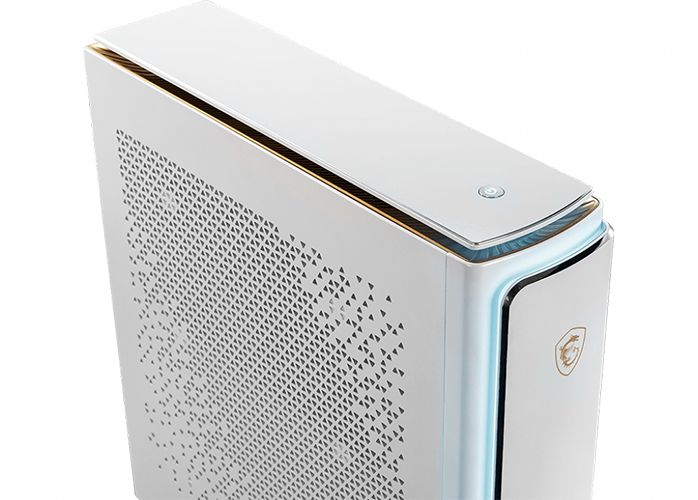 The rear, meanwhile, has a couple of USB 3.1G1 Type-A, two faster 3.1G2 Type-A, a couple of 2.0 again, Gigabit Ethernet, DisplayPort, HDMI and audio. Being portable, Bluetooth 5 and 802.11ac WiFi are present, but it's pretty slow by modern standards, offering a maximum 433Mbps through the Intel AC-9462 controller. This is definitely one area that is ripe for improvement.

MSI furnished this Prestige P100 with a suitably impressive spec. The company's MPG Z390i Gaming Edge AC miniITX motherboard houses a stock-clocked Intel Core i9-9900K chip. It's useful to know that MSI plays by the Intel rule book and doesn't allow the wattage to exceed the quoted 95W TDP, which has all-core-speed ramifications which we'll detail later on. Helping along is 64GB (2x32GB) of Samsung DDR4-2667 RAM. Filling both available DIMM slots, capacity is excellent though the frequency is not; we'd expect to see 3,200MHz in a premium PC such as this.

Storage is bountiful and as fast as the system allows. A 1TB Samsung PM981a NVMe drive populates the only motherboard slot and is curiously backed by two 2TB Seagate BarraCuda Compute 2.5in mechanical drives set to RAID0. We'd imagine creators would prefer greater security of RAID1 rather than higher speeds.

The depth allows for graphics cards up to 350mm long. MSI puts this to good use by installing a GeForce RTX 2080 Ti Ventus 11GB card clocked in at 1,545MHz boost and 14Gbps memory, representing stock speeds again. It's all driven by a SilverStone SFX 650W Gold supply.

If the internals look somewhat familiar, the Prestige P100 series is a toned-down version of the gamer-focussed Trident X. The implementation is therefore generally sound. The case stands on a raised base with plenty of perforated holes for ventilation. Cabling is neat for a relatively small system, there's plenty of room around the riser-mounted graphics card, while a custom cooler with a 140mm fan draws air in over the motherboard, CPU and memory area. Note that while the side panels - plastic on the outside, metal on the inside - have lots of cutouts, actual holes are only located near the hot-running components. Tracing the way air moves around the chassis, there's no real bottom-to-top or front-to-back movement; it's literally all over the place - the GPU pushes one way, the CPU fan the other.

There's little to upgrade equipped this way, but that's no bad thing because it has most of the bases covered, though there is a specification listing (P100X 10SF-201EU) with the upcoming Core i9-10900K in the works. Nevertheless, the upshot of such a generous specification for our review sample is a list price of around £3,000, which is broadly on a par with the same kind of kit inside a Corsair One.

Big on potential and small in size, let's run it through the benchmark gauntlet.