It is full steam ahead for MSI in the monitor arena. With its range of gaming displays having been well received, the Taiwanese manufacturer has jumped head first into the prosumer arena with a 34in ultrawide going by the name of Prestige PS341WU.

The first MSI monitor to be introduced under the Prestige umbrella, PS341WU is aimed squarely at content creators and multi-taskers who crave a wide, high-resolution canvas with excellent colour accuracy. Sounds right up our street, and though the £1,100 asking price is a somewhat large hurdle, we're eager to take a closer look. 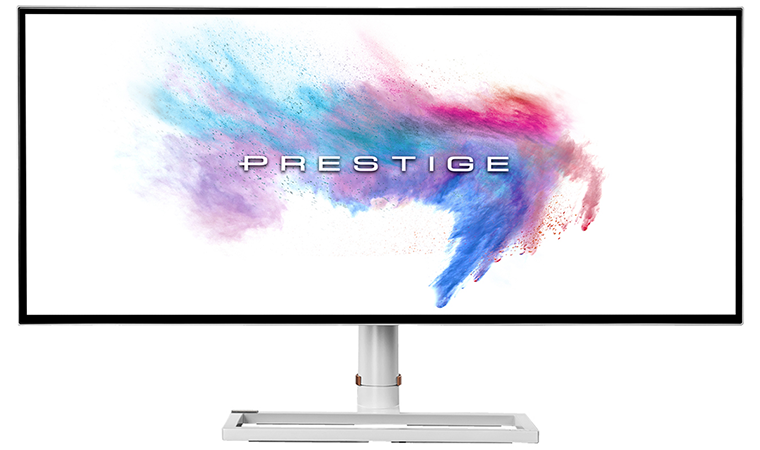 The headline specifications speak for themselves. MSI's chosen 34in IPS panel touts a luxurious 5,120x2,160 WUHD resolution as well as 98 per cent coverage of the DCI-P3 colour gamut, and we're told that each unit is factory calibrated to ensure colours are true to life. Our benchmarks later in the review backup such claims.

A 21:9 ultrawide format is without a doubt a real boon for productivity, and when compared to a regular 4K (3,840x2,160) panel, the PS341WU offers an additional 2.7m pixels, translating to an extra 33.3 per cent of horizontal real estate. There's also no curve, which we prefer for work purposes, and the specs are comparable to the LG 34WK95U that debuted a couple of years ago. Is a 34in screen big enough for such a resolution? Just about, though we would prefer a larger model given the choice.

178º viewing angles are expected of an IPS solution, brightness of 450 nits is decent and paves the way for DisplayHDR 600 certification, while contrast is officially rated at 1,200:1. MSI ticks most of the relevant boxes for the target audience, though do be aware the PS341WU isn't well suited to gaming duties. An 8ms response time is relatively slow, getting playable framerates at the native resolution would take a significant amount of GPU horsepower, and the maximum 60Hz refresh rate isn't aligned with any form of adaptive framerate synchronisation.

This is a productivity solution first and foremost, so the absence of FreeSync/G-Sync isn't a dealbreaker, however MSI has opted for a distinct aesthetic that some will appreciate while others won't. I personally fall into the latter category. The white chassis clashes with just about every piece of computer equipment I own, and though the design looks attractive in the product shots, it has an almost toy-like quality about it in person. Thank heavens there are no RGB lights.

I'm quite surprised at how much impact something as simple as a white chassis can have. The 10-15mm black bezel around the display, for example, would normally go unnoticed, but on the PS341WU you know it's there due to the contrast of the surrounding white frame. Given the Prestige moniker, and the price point, it's easy to be disappointed by some of the plastic elements; the panel on the back used to cover the I/O ports feels cheap and clips on using a dozen-or-so plastic notches that seem perilously close to snapping each time the cover is re-attached.

MSI's VESA-compliant stand requires four screws but is fixed easily enough, however the range of adjustment leaves room for improvement. The ability to tilt to -5º/+20º is welcome, as is the 35º of swivel, however height adjustment is limited to 100mm, and as a tall chap I can't quite get the panel as high as I'd like. At its maximum height, the top of the screen is 500mm from the surface of the desk. While we're nitpicking the stand, let's also point out that cable management could be better. There's a clasp behind the plastic I/O cover, and beyond that just a copper-coloured hook that attaches to the vertical column. Keeping cables tidy isn't easy, however the stand is sturdy in construction and results in very little unwanted wobble.

Overall dimensions of 817mm x 501mm x 260mm demand a good-sized desk, and though the PS341WU looks a tad chunky on the sides, an integrated power supply takes away the need for an external brick. In the I/O department, the downward-facing ports tucked around back include a pair of HDMI 2.0, DisplayPort 1.4, USB-C with DisplayPort, USB 3.2 Gen 1 Type-B, USB 3.2 Gen 1 Type-A and a connector for the power cable. Be aware that DisplayPort is the only means of driving the native resolution at 60Hz; HDMI will be limited to 4K60.

What's handy, particularly given how awkward the I/O cover is to remove, is that a further two USB 3.2 Gen 1 Type-A, headphone and microphone jacks and an SD card slot are neatly arranged on the panel's left side. Do note that the PS341WU doesn't include any built-in speakers - the audio jacks are passthrough only - however the availability of an SD card slot is a clever nod toward creators.

Elsewhere, a joystick located near the rear bottom-right corner does a fine job of navigating the OSD, the power button on the underside doubles as a subtle status LED, and there's also a 'Creator OSD' shortcut button that can be used to launch the companion desktop software, should you choose to install it. 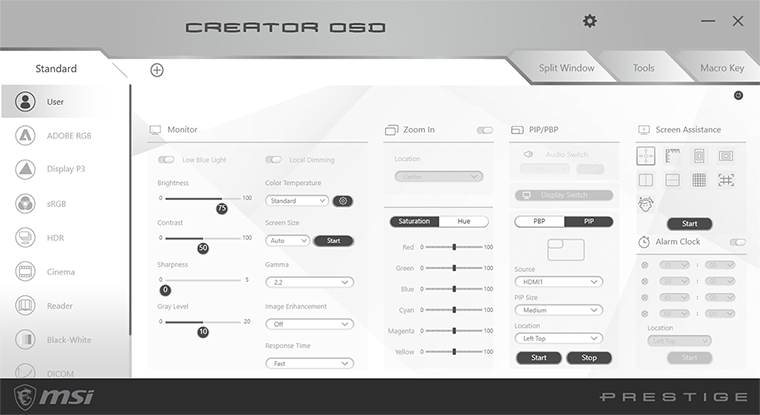 The Creator OSD software is short on overall polish, and can feel a tad laggy during use, yet provides easy customisation using keyboard and mouse. It's a handy tool to have, though MSI has missed a trick in not catering for firmware updates within the app. A number of fixes have been made available since launch, and the steps required to get our review sample updated to the latest available firmware - v0.24 at the time of writing - are stupefying at best. The entire process is detailed in a nine-page document available here, as well as a YouTube video tutorial, but firmware updates really shouldn't be this involved.

Enough of the preamble, let's run the benchmarks and see exactly how the panel performs.