Mass adoption of a technology happens when heavyweight players all tip their hats into the ring. AMD has trailblazed the move to faster desktop storage by amalgamating PCIe 4.0 support into CPUs and chipsets for a while. Now, market leader Intel, with an 80 per cent processor share, is readying desktop 11th Gen Core chips, codenamed Rocket Lake, with the same capability.

PCIe 4.0 is important in the storage world as it brings double the bandwidth as existing PCIe 3.0 at the same lane width. Speaking to M.2 drives, which is the most common form factor for NVMe-based SSDs, having access to PCIe 4.0 x4 cranks up the available bandwidth to around 8GB/s. Such a figure is honey to the bees of the premium SSD manufacturing industry.

With support of the only two players in desktop x86 town, you will see a steady number of ultra-high-performance PCIe 4.0 drives arrive to market. Though many have jumped on to the standard already, WD and Samsung have taken it a step further by releasing drives that get close to saturating even this enhanced bandwidth.

Available in 1TB and 2TB capacities costing £200 and £390, respectively, key differences over the regular MP600 include that E18 controller equipped with higher speeds and a change in TLC Nand from Toshiba to Micron. Comparing like for like, Pro has 41 per cent higher read speed and 18 per cent higher random write IOPs. Both capacities feature integrated heatspreaders because Corsair knows the extra oomph available to the Phison E18 controller is likely to make it run hotter.

It's not all good news, however, as upping the performance wick reduces drive endurance by a significant margin. Focussing on our 2TB review model, terabytes written (TBW) drops from the regular MP600's 3,600 to 1,400 here. That's still enough for almost an entire drive write per day over the five-year warranty period, but it's one metric we certainly don't like to see go down between generations. Is it right that a company's best-ever consumer drive continues to use TLC memory? That's mostly an academic question as rivals do the same. 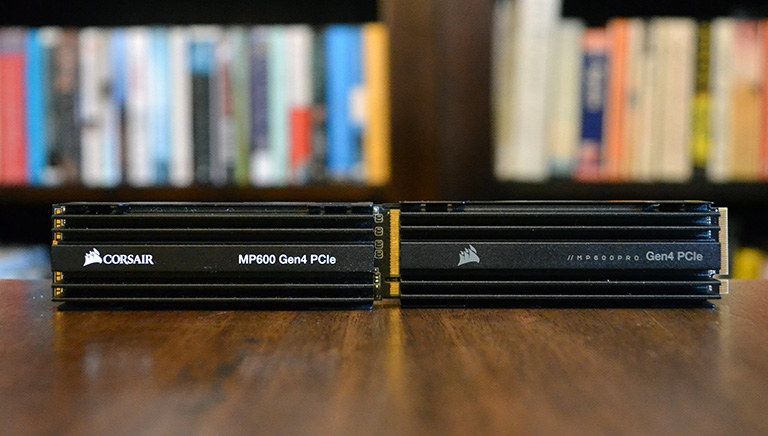 The drive, on the right, looks very much like its predecessor. The thick aluminium heatsink can cause installation issues in certain motherboard and M.2 slots, particularly secondary or tertiary if they're primed for all-encompassing massive heatsinks, but one shouldn't have a problem in the primary slot that usually has more room around it. Even so, heatsink assembly is such that it can be (deliberately) prized off by using a flat-headed screwdriver on each side, and it's good to see that Corsair uses thermal interface material on both sides.

From a style point, we prefer the softer grey lettering to the bright white of the original. The heatsink extends across the back. Removing it is no bother, either, leaving the PCB on show. 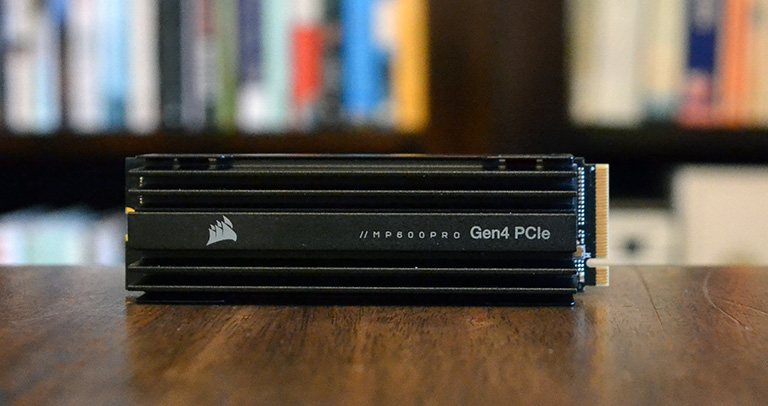 Corsair also offers this 2TB model as a Hydro X model featuring a preinstalled XM2 block ready for custom loops. Cost escalates by around £40 but underlying performance and longevity specifications remain the same. There's nothing stopping you from integrating the same block on to other drives as it's available separately.

Back on point, like many, the Corsair MP600 Pro dynamically allocates the TLC Nand into a faster SLC cache for frequently-used hot data. Totalling up to 100GB or so, general performance ought to be very robust unless you're moving truly massive files around. 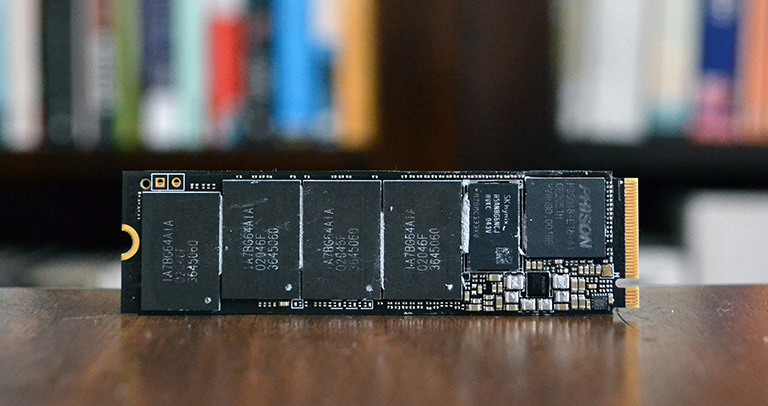 The 2TB drive houses the eight-channel Phison E18 controller on the right. The five remaining chips - 1GB DDR4 and four 256GB Micron TLC Nand (IA7BG64AIA) - are replicated on the back. Corsair is set to retail a 4TB model soon, so NAND capacity will double as there's no spare space on this standard 2280 PCB.

Do note if you choose to remove the integrated heatsink, most likely to fit underneath your motherboard's own M.2 cooling, then the pre-applied TIM is rendered useless because it breaks up easily and cannot readily be reapplied.

Corsair's SSD Toolbox offers simple reporting duties, but the GUI feels rather tired compared to the latest software from the likes of WD. Enough jibber-jabber, let's now see how it performs.