Ready for initialism overload? It's easy to pick up an M.2 NVMe PCIe SSD based on price alone. Spending £100 or so heralds a 1TB model outfitted with the latest NAND capable of hitting peak sequential speeds in excess of 2,000MB/s read and write. Spending getting on towards double that amount brings PCIe 4.0 drives into play, usually outfitted with the Phison E16 controller, which hit 5GB/s read and writes on the latest AMD platforms when outfitted with suitably speedy NAND.

Yet there are plenty of interesting choices between these two bookend prices for 1TB drives. Does it make sense to spend £170 on a PCIe 3.0 model touting premium features when PCIe 4.0 is very much in the frame? This is the quandary that Kingston finds itself in with the KC2500. Here's how it rolls.

Don't for one minute consider peak sequential speeds as the only metric that matters. As you will see later on, the KC2500 is a consummate performer that very much deserves premium status. Available in four common capacities, sensibly including a 2TB edition, speeds and feeds are indeed in the upper echelons of PCIe 3.0 x4. Other than the 250GB model, the quoted numbers are robust, made possible by partnering Kingston-branded Kioxia (Toshiba) 96-layer 3D TLC NAND with the proven Silicon Motion 2262EN controller. The EN is important as it distinguishes from the original, lesser-performance controller released a while back.

Eagle-eyed readers will notice that Kingston has been down this controller road before with the £155 KC2000, so why the new model? Well, the company has eked more performance for the KC2500. Eked is somewhat disingenuous because for the 1TB model in for review, sequential reads and writes are up by 9.4 percent and 31.8 percent, respectively, while IOPS go up by around 10 percent. Handy gains from ostensibly the same technology. It is reasonable to assume that Kingston has worked hard with SMI to tweak the controller further. The SMI 2262EN is also present in a number of competitor drives from the likes of ADATA and Mushkin, but each have their own special sauce with respect to mating NAND and achieving a set level of performance.

Going beyond the remit of entry-level drives, the KC2500 carries a full security suite. The self-encrypting drive complies with TCG Opal 2.0, XTS-AES 256-bit, and eDrive standards, pushing it into the high-end consumer/workstation category, though do be aware that the extant KC2000 also supports them.

The black PCB is a nice touch on the standard M.2 2280 form factor but we don't like how the paper sticker dominates the topside that you'll see if you don't have a motherboard heatsink to hide it with. The white background and mass of lettering is unsightly in a clean, minimalist build that we favour, and Kingston could certainly make it half as large without issue.

Competitors have sought to reduce the number of chips on their 1TB drives by going dense on each IC. Kingston doesn't bother as it opts for a dual-sided arrangement of an eight-NAND layout alongside the controller and two DDR3 buffering chips that actually feature on some of its regular system memory from the past. One may reasonably expect the drive becomes rather toasty under load; you'd be surprised by the results. 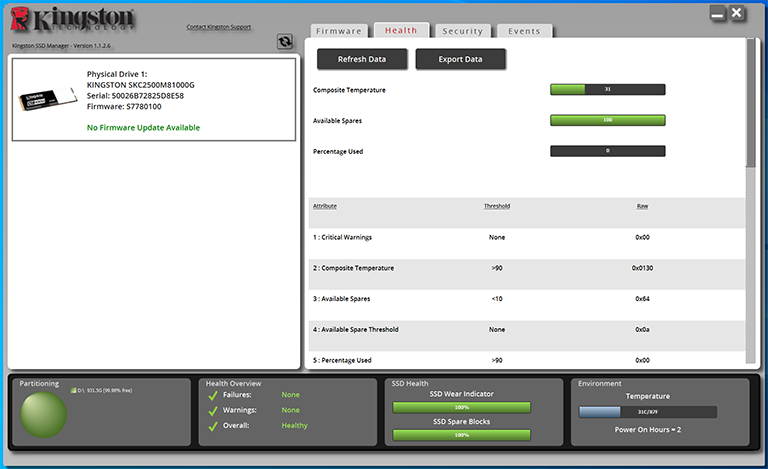 There's nothing fancy about the accompanying SSD Manager utility... but that's a strength. Firmware updates are easy, everything is laid out intuitively, and labelling is clear. Like most others, a license key for Acronis True Image OEM is included to help ease the transition to a new drive.