The computer memory market is split into two broad camps. On the one hand you have what we'd term the generic crowd, where price is the ultimate determining factor. These sticks often come unadorned with heatspreaders and feature JEDEC speeds and timings.

A second camp is aimed at the enthusiast, and more recently, ones that like to play with RGB lighting. Almost every DIMM manufacturer has an RGB-laden kit in its arsenal, and the latest series arrive with full-width lightbars and near-infinite customisation through manufacturer-specific utilities.

Is there space for a new entrant with no previous experience of enthusiast RAM? Gigabyte off-shoot Aorus thinks so, and to this end has released its own RGB memory at the Computex trade show. There's only one pack available - 16GB (2x8GB at DDR4-3,200 speeds - but it does arrive with a twist. Let's take a look. 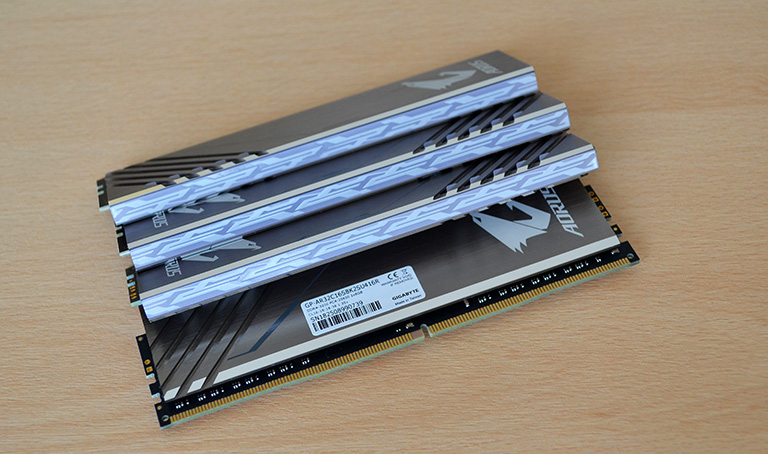 Aorus uses 2mm-thick brushed aluminium heatspreaders attached to a 10-layer PCB. The design is pretty without being too gamer-garish. The full-width light diffuser is imprinted with an Aorus pattern that's not so visible when the lighting is active.

Standing 39mm tall, size isn't an issue, either, and the weighty feel intimates that Aorus hasn't skimped on materials.

Of more interest to most enthusiasts is the underlying ICs. Aorus uses Samsung B-die chips for this solitary kit - always a good choice in our book - and opts for DDR4-3,200 speeds with 16-18-18-38 timings allied to the usual enthusiast-level 1.35V. It's sensible to have just a single kit when launching into a new category, though one would assume Aorus will offer faster speeds and different capacities if this RAM takes off.

Didn't we mention that it was a two-module kit comprising 8GB sticks? That's true, so why are there four DIMMs in the pack? The answer is deceptively simple. Aorus understands that most consumer motherboards have four DIMM slots, meaning that a regular two-module kit will have to leave inevitable space between RGB modules. Kind of sucks when the whole point is lots and lots of illumination.

This is why there are two dummy modules in the pack. Though identical from a light diffuser and heatspreader vantage, it's easy to spot them - they have no ICs or contact points. Instead, they're obviously present to provide a full-width, uniform look. Makes sense in our book, albeit at a slightly increased cost to Aorus, one would assume. We wonder if others will follow suit. 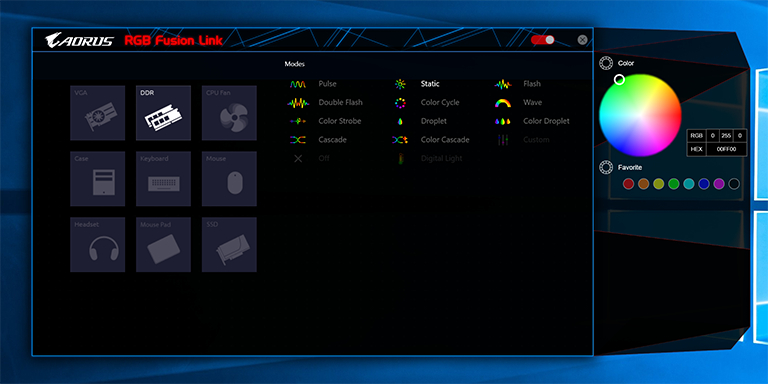 There are two ways to configure the effects. If you have a compatible Gigabyte motherboard - Intel X299, 200- and 300-series, or any AMD AM4 - then full control is provided by the standard RGB Fusion Utility. If you don't, you can still modify the colour and flashing mode(s) through RGB Fusion Link, shown working on an Asus Z370 ROG Maximus X Hero motherboard on the screenshot above.

11 effects are applied instantly - there's also an option for off - and one can also modulate the speed of a relevant effect through a slider on the right-hand side. There's no method to adjust the modules' brightness in Fusion Link, however, and, unlike Corsair, there's no means of using the colours as ambient lighting that reflects what is happening in a game. 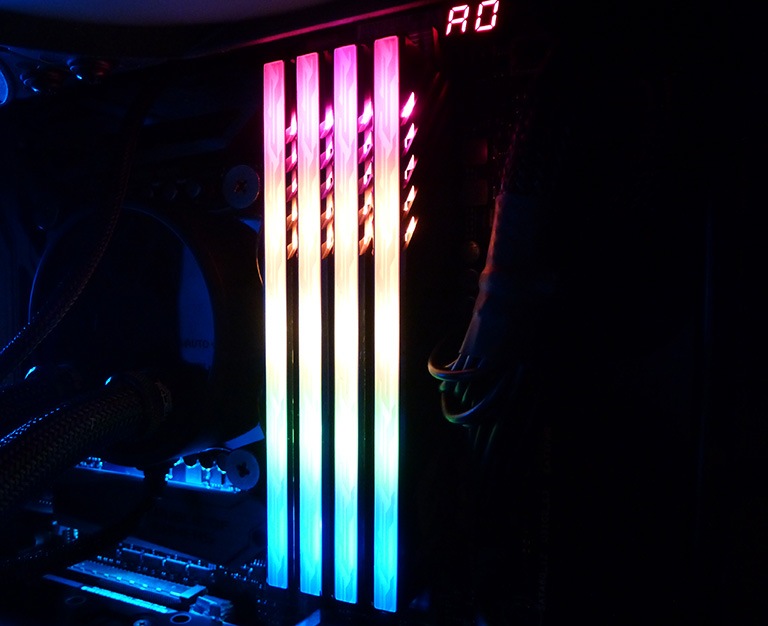 So how do they look? Better than the picture suggests, actually. The lighting is even across the entire diffuser, helped by having five evenly-spaced LEDs on either side, and we had no problem with installing the modules in any order (blank first or actual module first). The sticks kept good synchronisation across effects, and if you didn't know better, it seems as if you have four pukka modules instead of a couple of blanks.

And that's the biggest selling point of these £200 sticks, we imagine, because having a four-stick pack for dual-channel memory is, at the time of writing, something that no-one else offers.

Let's fire up some quick benchmarks and then pass judgement.