RGB illumination is a trend that continues to have legs throughout 2020. Prevalent within chassis, graphics cards, memory, and even SSDs, very few components have been left untouched. Corsair has taken it a step further and released a trio of PSUs with an RGB fan in situ. The CX-F range encompasses 550W, 650W and 750W models all specified with 80 PLUS Bronze efficiency. 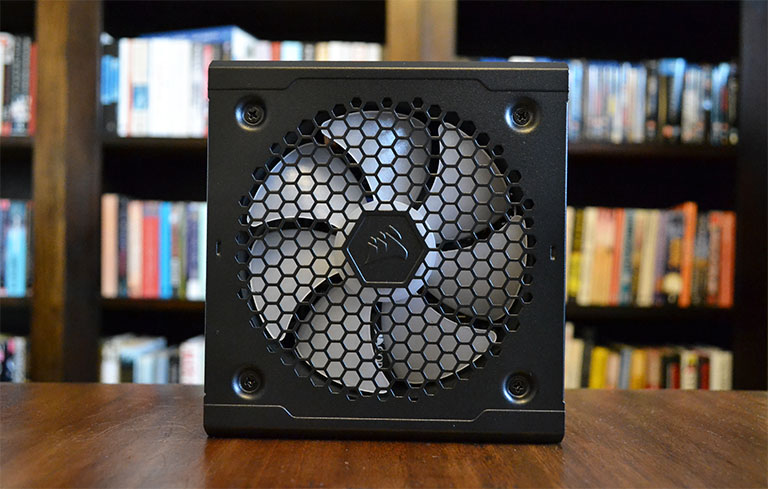 Available in either black or white, along with matching flat cables, we have the 650W model in for review. Costing £80 in either colour, pricing is reasonable in the current climate for a fully-modular supply backed by a five-year warranty from a leading name.

There's little reason to go large on the footprint, so CX650F RGB measures 150mm deep and tips the scales at 1.38kg. The unit features a honeycombed pattern on the rear and top and the design is largely inoffensive and build quality decent.

Cabling is plentiful. Corsair provides four 6+2-pin PCIe split over two cables, another two cables housing a total of four 8-pin CPU for high-powered systems, 7x SATA over another two cables, and the remaining connector offers four Molex. They're easily manipulated for straightforward installation but could do with more of a gap between Molex and SATA plugs on the same cable-runs.

This supply has an extra button and connector for RGB duties. Holding the button at the back for three seconds cycles through eight lighting modes and a ninth which turns RGB off. A second method of lighting variety is possible by hooking up the provided RGB cable to a Corsair Lighting Controller hub - Commander Pro or Lighting Node Pro - and then changing illumination via iCUE software. The third option is to connect said RGB to a provided ARGB cable for motherboards featuring the three-pin header. Lighting in this instance is controlled by the motherboard's software. Going down either software route disables the button's functions. 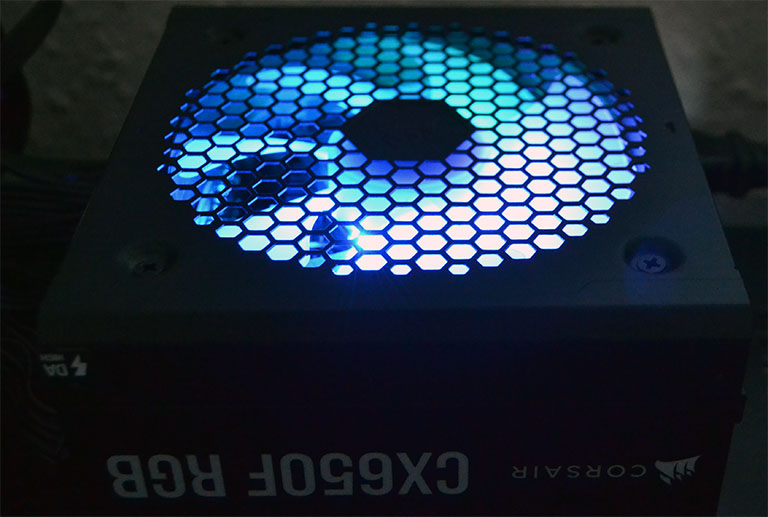 Connected via the ARGB header to an Asus motherboard, the PSU is presented as an addressable header, paving the way for simple, effective synchronisation. Corsair uses a 120mm NR120L rifle-bearing fan common on other mid-range supplies. This one carries eight individually-addressable RGB LEDs dotted around the centre. They can only be seen if looked at through a particular angle and when the fan is spinning slowly. The overall lighting is subtle and even as it streams out across the seven fan-blades. As RGB is the main raison d'être, Corsair does a good job on that front.

The fan spins at all times, ranging from around 400rpm at light loads commensurate with a PC idling, up to 1,300rpm at full capacity. Installed in a system, one cannot hear the 120mm spinner at anything below 300W or so. After formal testing on a Chroma harness, we powered up and briefly gamed on a Ryzen 9 5950X / Radeon RX 6900 XT machine without any stability issue, even though this model's capacity is well below what AMD recommends. 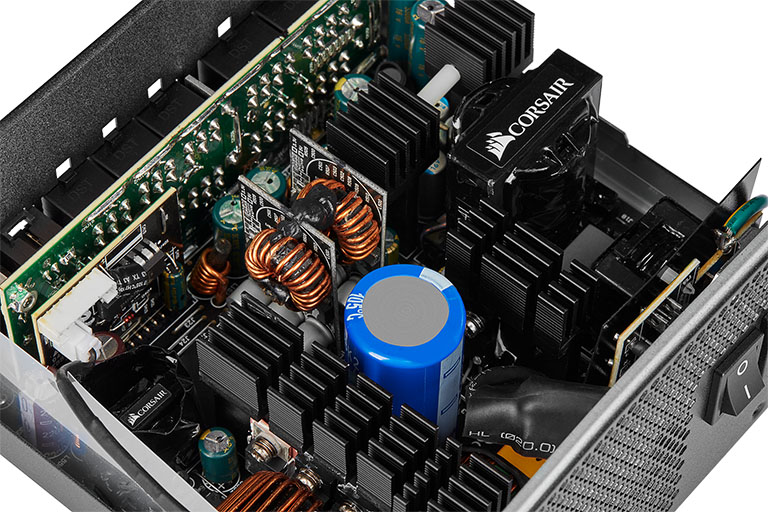 Inside, Corsair partners up with HEC for the modern platform which provides the full capacity, at up to 40°C ambient, down a single 12V rail. Like the non-RGB CX range, Corsair uses an LLC Resonant Half Bridge design which is usually found in dearer supplies. Adding to the engineering capability, the minor lines are derived from DC-to-DC conversion, meaning performance and efficiency ought to be at the top end of the Bronze scale.

Soldering is tidy, the choice of the primary hold-up Hitachi capacitor is robust for a Bronze model, but the secondary filtering Teapo capacitors you see on the edges aren't as great. Let's now run the Chroma rule before passing judgement.