You are here:
Peripherals Xbox Reviews

Managed to get your hands on the new Xbox Series S/X consoles? Then you might want to consider a gaming headset. A high-quality set of cans will significantly enhance the feeling of immersion, and if you're partial to multiplayer shooters, help get the drop on opponents lurking nearby.

A headset is, in our estimation, one of the simplest and best ways of improving the gaming experience, and there's no shortage of choice out there. We'll be reviewing a few options in the coming weeks, starting first with Corsair's HS75 XB Wireless. 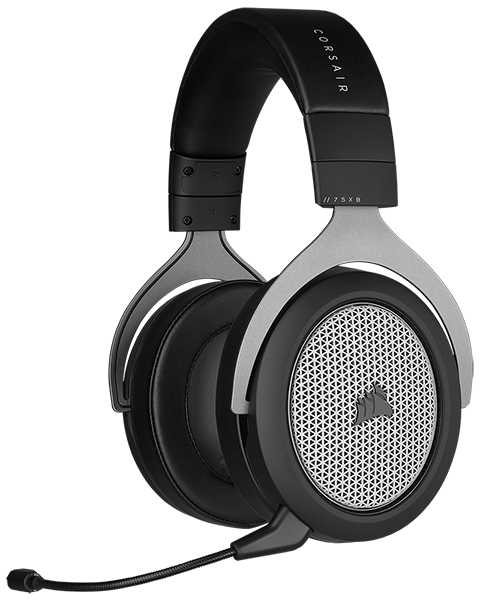 Priced at £170 and designed primarily for Xbox One or Xbox Series games consoles, the HS75 retains a design that's both easy on the eye and delicate on the noggin. We'd go as far as to say this is the prettiest HS-Series headset to date, with the grey yokes, metal grille and subtle branding contrasting neatly against the swathes of black. The design is elegant rather than ostentatious, and to that end there are no RGB lights to speak of.

How a headset looks should be secondary to how it feels during use, and we're pleased to find that the HS75 remains comfortable for long periods. There's ample adjustment even for my big head, the large earcups, filled with viscoelastic memory-foam and topped with fake leather, are suitably soft, and though the cushion beneath the headband could be thicker, the 330g headset does a fine job of staying in place without weighing you down.

While comfort is one of the HS75's strong suits, ease of use isn't, and that's down to a less-than-ideal configuration of buttons and wheels. The left earcup is home to a notched volume wheel, microphone mute button, small status LED, USB-C charging port, and connector for the detachable noise-cancelling mic. Over on the right there's a power button and a chat-mix wheel, with a halfway notch helping identify the middle ground between chat and game audio.

On paper, Corsair seems to have everything covered, with all the controls you'd expect, but the buttons aren't particularly intuitive to use. The power button, for example, has to be held for three seconds to turn the headset on/off. Simple enough, but when powering down you only hear an audible beep after you've let the button go, leaving it to the user to time it right. Failure to press the button long enough won't turn the headset off; hold it too long and you'll inadvertently enter pairing mode. An audible beep letting you know the headset is about to turn off (i.e. you can now let go of the button) would be preferable.

The status LED is something of a mystery, too. It turns amber when charging via the 1.8m braided USB Type-C to Type-A cable, but doesn't seem to change or turn off when the battery is full, no matter how long we leave it plugged in. Similarly, the microphone mute button is met with two blips of slightly different tones, making it difficult to tell whether the mic has been turned on or off.

Corsair's audible notifications ought to be clearer, and while struggling with the controls, we've stumbled upon another button; the volume wheel can be clicked. We believe its function is to switch between sound profiles, but Corsair's brief manual makes no mention of this feature. The good news is that the physical controls tick most of the right boxes with buttons and wheels that are conveniently positioned, and a firmware update could surely alleviate some of the usability concerns raised above.

What won't change is the headset's limited choice of connectivity. As an officially licensed product, HS75 uses the proprietary Xbox Wireless protocol for direct pairing to Xbox consoles at a range of up to 30ft, but there's little scope to use the headset with other devices. Users wanting to pair HS75 to a PC will need to purchase an optional Xbox Wireless Adapter, there's no 3.5mm audio jack for wired connections, and the lack of Bluetooth means you can't pair your smartphone for notifications whilst gaming.

HS75 XB Wireless is for all intents and purposes strictly an Xbox solution, and it excels at the primary goal of bringing game audio to life. Corsair's custom 50mm neodymium drivers are, as expected, tailored toward gaming with boomy bass that lends itself to action-packed titles. The heavy-handed approach can also work well when listening to certain types of music or watching movies, but ultimately isn't as refined as headphones designed specifically for those mediums. 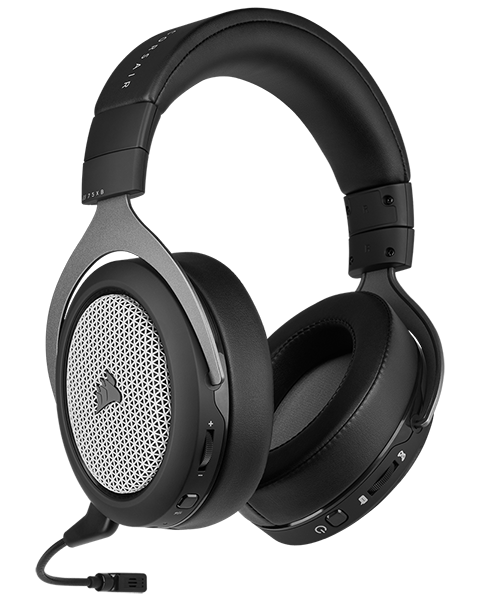 Adding to the feeling of in-game immersion is Dolby Atmos, which in supported titles is able to convincingly pinpoint sounds with a spacious soundscape and level of precision my TV speakers simply can't match. Gears 5 is an excellent example - that chainsaw never sounded so bone-crunchingly realistic - and every minute detail in one of my favourite games, Ori and the Will of the Wisps, is brought to the fore in harmony with the orchestrated score.

Do note that you'll need to download the official Dolby Access app in order to enable the Atmos enhancement, but don't be put off by any in-app charges; Dolby Access will automatically activate Atmos at no extra cost when it detects the HS75 headset.

Last but not least, Corsair's microphone delivers respectable results with clear voice, little in the way of background noise, and a flexible arm that makes light work of positioning. The detachable design is handy for those who rarely venture into multiplayer; just be careful not to lose the mic as there's no carry bag or storage compartment.