Over a year has passed since Aorus made its debut on the PC gaming monitor scene. The Gigabyte subsidiary's first effort, dubbed the AD27QD Tactical Display, was generally well received as a competitively-priced 27in FreeSync solution offering basic HDR support and fast 144Hz action at a QHD resolution.

Entering the market shortly after the announcement of Nvidia's G-Sync Compatible program helped heighten the AD27QD's appeal - said panel was one of the first FreeSync solutions we'd tested on GeForce hardware - and Aorus is now hoping to build on those solid foundations with a choice of refreshed flat panels offering speeds of up to 165Hz. 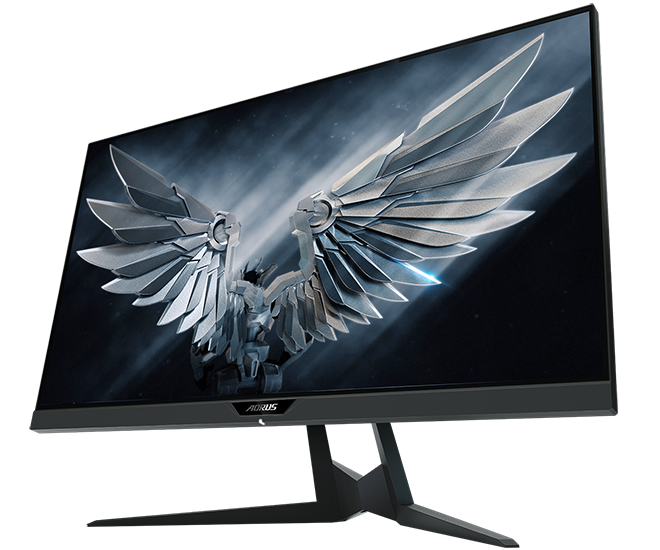 From the outside, it doesn't seem as though much has changed. Aorus is employing the same 27in chassis as the original AD27QD, meaning a gamer aesthetic that some will appreciate and others won't. The three-zone RGB lighting on the back doesn't do anything for us - it's barely noticeable from a sitting position and isn't particularly effective as an ambient illumination - but the front of the monitor is suitably sleek.

The metal stand continues to do a fine job, with 130mm height adjustment, -5º/+21º tilt, and up to 20º swivel. There's an option to pivot 90º - something I appreciate if only for easy attachment of cables - and if the stand isn't meeting your needs, it is easily removed to reveal a regular 100mm VESA mount. 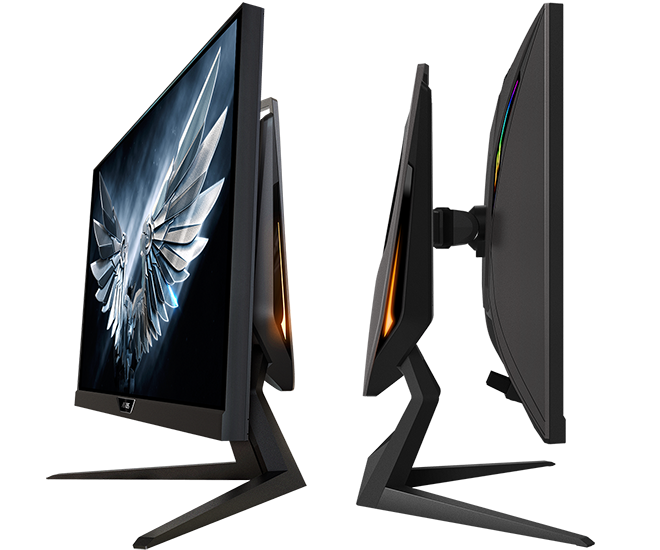 Aesthetics are an acquired taste, yet build quality is decent throughout, the carry handle is useful, and an intuitive joystick for navigating the OSD is positioned within easy reach at the centre of the monitor's bottom edge. Nitpicking somewhat, it's a shame that Aorus hasn't acted on our criticisms of the AD27QD; the 9mm border between the edge of the display and the monitor's sides is still a tad thicker than we'd like; and the basic power LED continues to convey a less-than-premium feel.

The big question mark is does the FI27Q-P do enough to stand out from its outwardly-identical IPS siblings? In a nutshell, the major upgrades are a 165Hz refresh rate and the inclusion of DisplayPort 1.4, providing the bandwidth for every available setting to be dialled up to maximum. It is a case of removing any limitations. With only DisplayPort 1.2, last year's AD27QD can push a QHD resolution at 144Hz with 8-bit colour, but needs to drop back to 120Hz when 10-bit HDR is enabled. Similarly, the newer FI27Q can manage 165Hz at 8-bit, but faces the same 120Hz limitation in HDR. Only the FI27Q-P, with DisplayPort 1.4, can drive a QHD resolution at 165Hz with 10-bit HDR simultaneously. 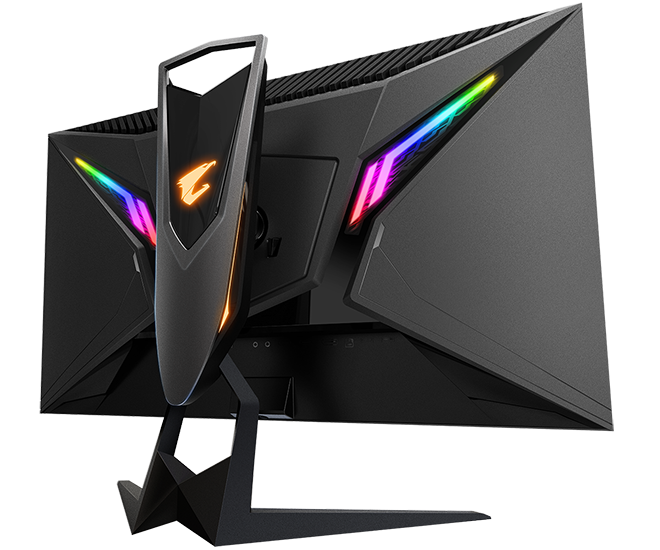 Supplementing the DP 1.4, you'll find a pair of HDMI 2.0, 3.5mm headset and microphone jacks, USB upstream, two USB 3.1 Gen 1 Type-A and a three-pin power connector for the built-in supply. The FI27Q-P is very much an evolutionary upgrade, and whether or not it warrants a £100 premium over the regular FI27Q boils down to how much you plan on using HDR. Given the display's 350-nit brightness and limited HDR performance, we suspect a number of gamers may choose to take the more affordable route.

And if you're attempting to decipher Aorus's revamped model numbers, we've been able to get some clarification. Going forward, the first letter will represent a flat (F) or curved (C) model, the second letter identifies panel type (I for IPS, T for TN or V for VA), then there's numeric screen size, resolution and a suffix representing a special feature or grade. In this case, we have the Flat IPS 27inch QHD - Performance.

There's no reason the FI27Q-P can't be used for productivity - the resolution, viewing angles and out-the-box colour accuracy all bode well for work - but this is a gaming solution first and foremost. With that in mind, it is once again worth pointing out that there isn't really such a thing as the perfect gaming monitor. Each type of display panel has its pros and cons, and while some may prefer the contrast of a VA panel or the near-instant response of TN, I personally view IPS as a solid all-rounder.

As a result, the new Aorus feels enjoyable from the off. There's no black crush to worry about, colours are vivid, and to our pleasant surprise, the review sample has minimal clouding and hardly any backlight bleed. This is something that can vary significantly from one sample to the next, yet our positive experience has us wondering if Aorus has cherry-picked the best panels for the range-topping -P model. 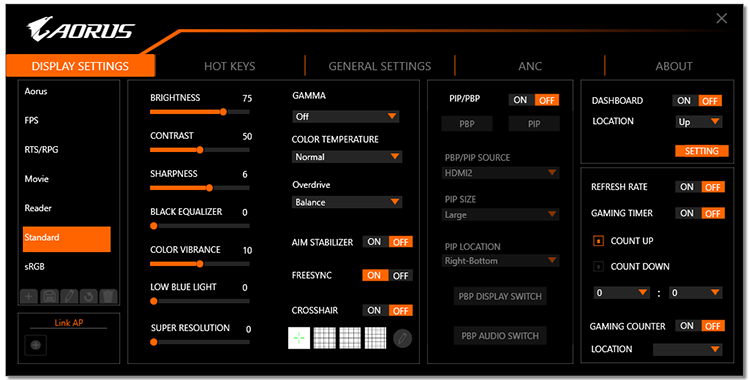 In terms of FreeSync support, we're looking at synchronisation in the 48-165Hz range via DisplayPort (48-144Hz via HDMI), with support for Low Framerate Compensation and official certification as Nvidia G-Sync Compatible. Gaming at high speed is, as expected, buttery smooth with no signs of tearing on either Radeon or GeForce hardware, however inverse ghosting does remain an issue at lower framerates. The default 'balanced' overdrive setting worked best to our eye, and though the amount of overshoot isn't likely to be a deal-breaker for most, those most susceptible may feel more at home on a TN alternative.

Gaming at up to 165Hz at the native QHD resolution is ultimately a feast for the eyes, and Aorus has more in the way of gaming assists than most competitors. These are accessed via the OSD or the rather useful Sidekick desktop utility (pictured above), and include Aim Stabilizer, which at the expense of overall brightness reduces motion blur in an effort to minimise weapon recoil, and Black Equaliser 2.0, which analyses 1,296 on-screen partitions to lighten whatever is lurking in the shadows.

Neat tricks, but given the impact on overall image quality we suspect most users will prefer to leave such assists turned off a lot of the time. What's potentially more useful is the integration of active noise cancellation. Using two built-in mics and a DSP processing chip, ANC does a surprisingly good job of cutting out background noise via the 3.5mm jack. Last but not least, firmware updates are also performed via the Sidekick app, with the latest release at the time of writing, F02, claiming to fix a backlight issue. Our unit updated without a hitch, so let's run the benchmarks before coming to a conclusion.