Intel recently released 11th Gen Core desktop processors alongside new 500-series chipsets built to get the most out of them. The most feature-rich is the Z590, which over and above the same-socket Z490 offers an explicit four lanes of CPU-attached PCIe 4.0 NVMe storage, PCIe 4.0 x16 graphics, USB 3.2 Gen 2x2, a double-width link between chipset and CPU, and better outputs for baked-in graphics.

If you are going down the 11th Gen Core route, Z590 is likely the preferred destination, so which board to use? After a flurry of post-launch BIOSes, the first in the review ring is the Asus ROG Strix Z590-E Gaming WiFi priced at £330, which is about 10 per cent more than the non-WiFi Z490 board bearing the same name. 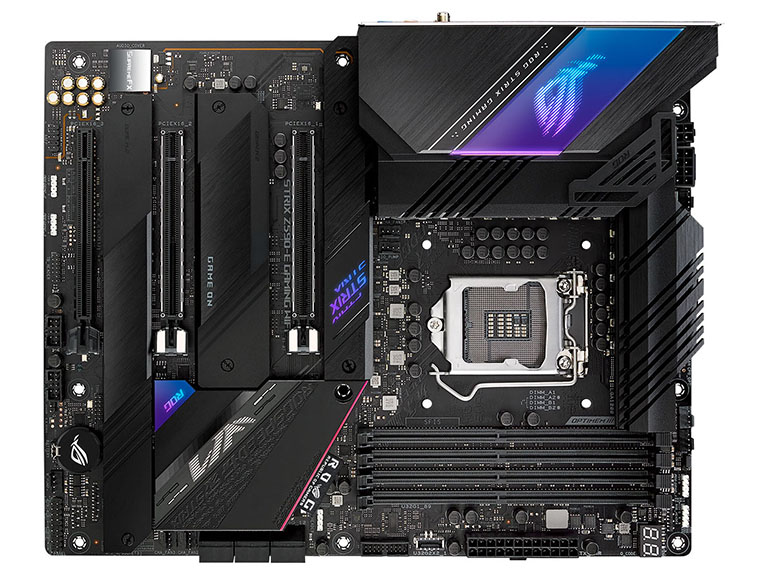 It's worth pointing out differences between the two boards than list similarities. Before, the VRM and chipset heatsinks were connected via a heatpipe. This time around, Asus wants more space for M.2 slots and changes the heatsinks to accommodate four M.2, up from just two. Run on an 11th Gen chip, the two closest to the socket operate at PCIe 4.0 speeds, while the remaining two hang off the chipset and are thus PCIe 3.0. Asus cools all four; the lower two sit side by side and have a double-width heatsink. For those not wanting to use the M.2 heatsinks, note the primary slot is reversed as the connector is closest to the edge of the six-layer PCB.

If you do choose to run both PCIe 4.0 x4 M.2 slots, the graphics card's lane width has to be manually adjusted in the BIOS to x8 - all lanes come from the CPU. If you don't, the secondary M.2 slot doesn't show up. On a better note, the two PCIe 3.0 M.2 slots have the rather good Q-Latch connector that locks them into place without the need to fiddle with tiny screws.

Power stages toe the recent overkill line. Z590-E Gaming WiFi has 16 70A (1,120A!) arranged in seven twinned phases for the CPU and a twinned pair for SoC. Good luck in getting 1,000A through an 11th Gen chip. Thirsty though they are, even a Core i9-11900K running with full ABT support consumes no more than 200A. Overkill is also apt, in a nice way, for the heatpipe-connected VRM 'sinks. Asus also does well with the M.2 heatsinks as they're sufficiently chunky and, for the primary one, has thermal tape on both sides. 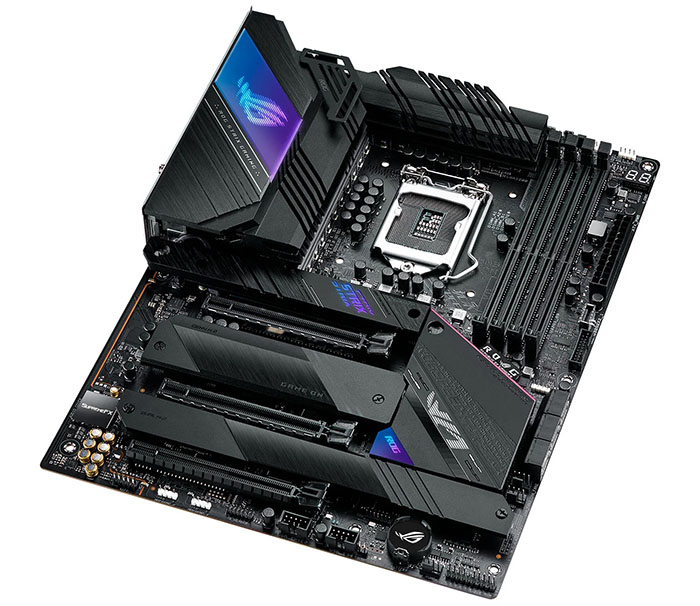 Lighting is present in three places. You can draw a diagonal line down from the I/O shroud to the bottom of the chipset. The lighting on the shroud is headache inducing. Quite why Asus decides to run with a blurry pattern - it's worse in real life - is beyond us, and being etched means it's visible even when the illumination is turned off. Those wanting more can be satisfied with four RGB headers - 3xARGB, 1xRGB - identified by the white sections on the PCB.

Though the board looks busy, everything is in easy reach. Five fan-headers are dotted sensibly around the edge of the PCB and a further couple by the CPU socket, just above the M.2 slot. Our only criticism is that, unlike some competitors, none are hybrid headers, meaning you have to worry about which are for AIOs or for air cooling.

Where the Z590 version distances itself from the previous iteration is with connectivity and audio. We see Realtek's ALC4080 codec paired with a Savitech SV3H712 amplifier for the first time.

We're fans of the rear I/O, as well. Why? Dual Intel 2.5GbE Ethernet ports is a great start, Asus uses the latest AX210 WiFi 6e also from Intel, and there's even room for a single 20Gbps USB 3.2 Gen 2x2 port here and another on the PCB itself. We also like the fact that both DisplayPort and HDMI are covered, and the clear CMOS button is handy for overclockers. Being critical, we'd change the two USB 2 to newer standards but that's about it.

In sum, Asus now provides better power circuitry, upgraded networking, improved audio, twice as many M.2, and PCIe 4.0 over and above the last generation. That's got to be worth £30, right?

The latest BIOS, meanwhile, implements Adaptive Boost Technology (ABT) for the test Core i9-11900K chip. Activating it pushes the all-core frequency up from 4.8GHz to 5.0GHz... along with a rise in wattage, as we'll show you on the subsequent pages.