AMD builds upon Ryzen momentum by imbuing the latest processors with Zen 3 technology. It's hard to argue against Ryzens for mainstream and power users alike, and all motherboard makers have taken notice by increasing the number of boards available on the AM4 platform.

The premier destination remains the X570 chipset, but a growing number of cheaper B550 boards make choices more difficult in the sub-£200 bracket. One of the big four, ASRock looks to offer solid X570 goodness with its latest offering. Enter the X570 Phantom Gaming Velocita.

Priced at around £240, ASRock adds to the chipset by implementing Killer 2.5G Ethernet, Killer AX1650x WiFi, a debug LED, video outputs for any Ryzen onboard graphics, dual M.2 heatsinks, an integrated I/O shield, and a 14-phase power supply cooled by some of the largest heatsinks we've seen. 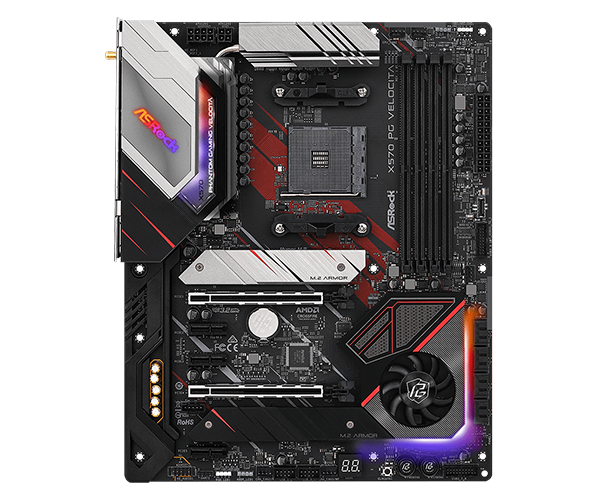 The racy look is augmented by RGB lighting on the I/O shield. Spilling on over to the VRM heatsink to the right, the colour scheme is an acquired taste. That 14-phase supply is hidden underneath two chunky, heatpipe-connected heatsinks that are extremely solid in construction and well-connected to the underlying devices they serve.

Not having a third PCIe x16 mechanical slot works reasonably well for layout. Nothing major feels cramped as a result, and there's plenty of room around the two strengthened slots and M.2 heatsinks. The one sacrifice is the topmost x1 slot is rendered useless as most will run with a discrete graphics card. 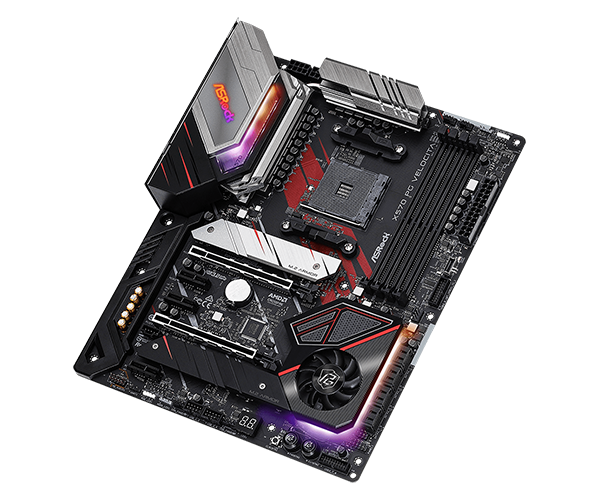 Six fan headers and four RGB headers have almost everyone covered. We're not bothered about a lack of DRAM reinforcement as it's more for show than real-world use. The Type-C header is most welcome, though it is limited to 10Gbps for chassis that can accommodate it.

We'd have kept the upper M.2 heatsink closer to black to better match the overall aesthetic, but the board has more of a two-tone finish than you might think. Both heatsinks are basic compared to the encompassing models seen on £300+ X570 boards, but as you will see later on, they perform more than adequately. It's worth knowing that only the lower one supports SATA drives in addition to PCIe 3.0/4.0 x4, though who uses the former any more?

Of more pressing concern is if users choose to populate the Thunderbolt AIC connector. Doing so disables the lower M.2, leaving just one, which is meagre for an X570. Surely ASRock could have found room for another 2280 M.2 somewhere else on the board?

Manufacturers are encouraged to add a chipset fan to the hot-running X570 PCH. ASRock duly does, and it's fairly quiet, running at around 2,850 rpm by default on the latest BIOS - it was a noisy 3,800rpm before we flashed it - yet switching it off in the firmware doesn't diminish overall performance at all. It's good to see on/off/CMOS reset buttons on the PCB - though it would be good if they were backlit, a la Asus - and there's enough clear area around them for easy access, even when in a standard chassis.

That racy colour scheme is back on the rear. There's a fair bit to like here, including the aforementioned Killer networking and display outputs. It wouldn't hurt to have a couple more USB ports, however.

Only the two central ports offer 10Gbps throughput; the others are USB 3.2 Gen 1 and consequently 5Gbps. Why we can't have at least 10Gbps everywhere in 2021 is perplexing.

Having not used an ASRock board in a while, the latest firmware, 1.53, offers a FHD resolution and smooth scrolling between pages which are laid out intuitively. Unlike, for example, MSI, it is super-easy to update it via the 'Instant Flash' feature. Though replicated in the OS, RGB control is also present, while the firmware installs the correct speeds for our Ryzen 9 5950X when set to Auto. The only change we made from optimised defaults was to install the XMP setting for memory. In short, it's an easy BIOS to work with, minimising faff by not being overly complicated.

Looking a fine proposition for gamers pairing a Ryzen 5 or 7 processor with a mid-range discrete card, let's now see how it performs against established competition.